[Note: Today marks the start of my thirteenth year of blogging about open source. Wow]

Sorry for the delay in getting this post written. We’ve had a couple of bouts of winter weather in North Carolina this week and it has really messed up the schedule. This was quite unlike the beautiful weather we experienced in Los Angeles for SCaLE 13x.

Saturday, Day Two for me, was a long one. The expo floor was open for eight hours so outside of giving my talk and lunch I was pretty much in the booth. I think my talk was well received, but Jeff’s talk later in the day was standing room only. I was told that the talks were being streamed live so I hope to see archived recordings soon.

I missed Jeff’s talk because I was in the booth giving away another set of MC Frontalot CDs. The winner did not want to be identified, so I don’t have a picture.

I didn’t take many pictures that day (we were too busy) but I did get a lot that evening. There was a game night with food and a bar, and that’s where the OpenNMS-sponsored Frontalot show was held.

Before the main festivities, they opened up the room for kids. They had a bunch of games set up. Jess told me that this was “Super Smash Brothers” (I think) at the Mario Kart stage. 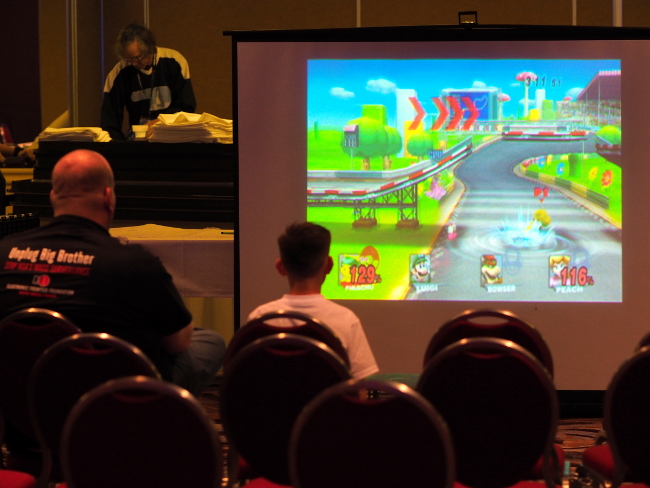 About 9:30pm Damian started his set. 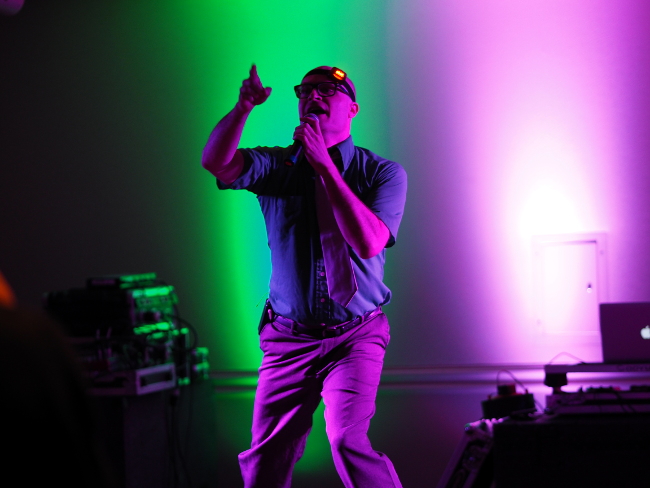 I think it was well received – I at least had fun. He hit all of my favorites with the exception of “Critical Hit” and this was the first show I’ve been to that he also had video. For those songs with official videos, those were played, but he’d also arranged some graphics for the others. I thought “Victorian Space Prostitute” worked particularly well, although Jess was the only one I think who recognized all the cosplay.

After the show there was a raffle. Colleen did a lot of the giveaways but since I had to spend the entire weekend in the booth I didn’t get to play (sniff). 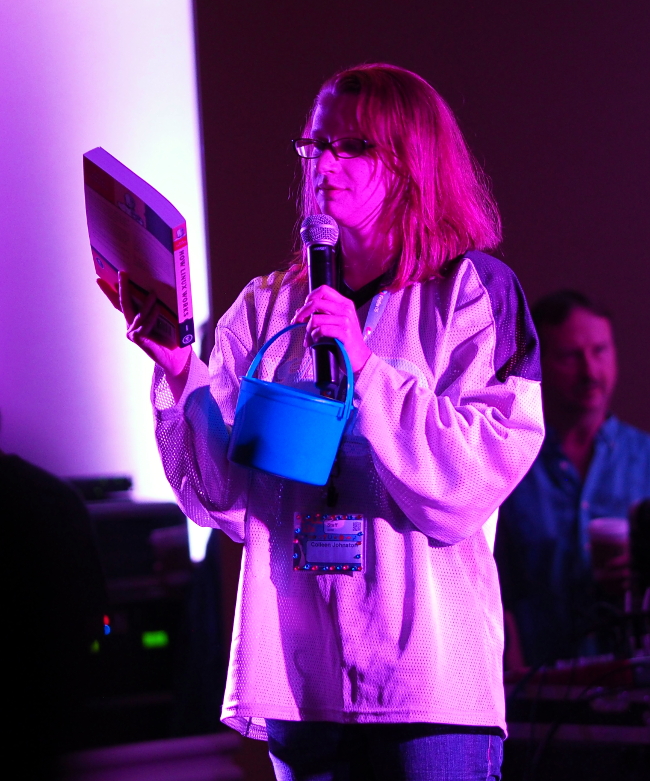 I did get a nice picture of another SCaLE organizer, Ilan with his lovely bride: 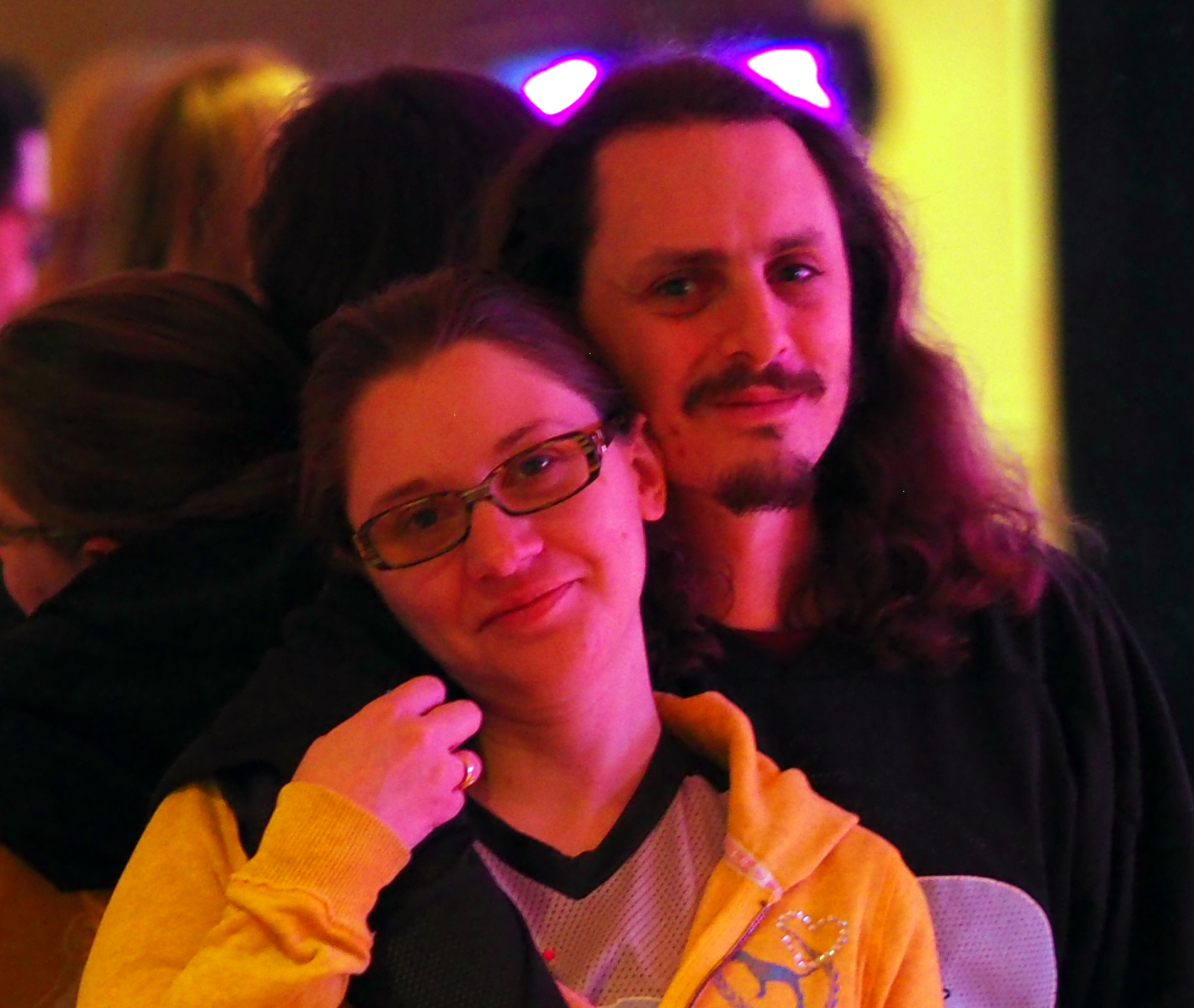 After the show I ran into Jono Bacon and most of the Bad Voltage crew. 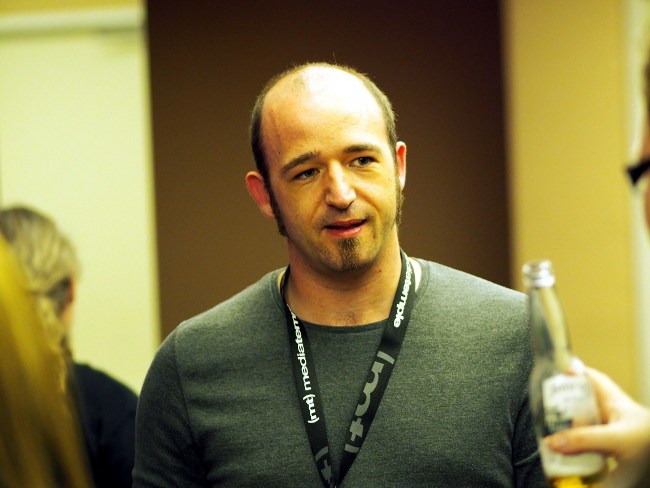 Jono seemed convinced that I looked like George Jetson: 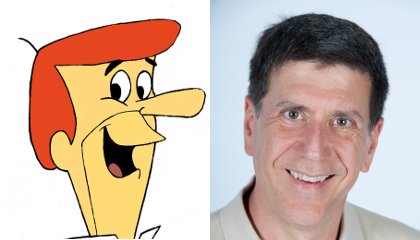 but I think I much more rock the Fred Flintstone: 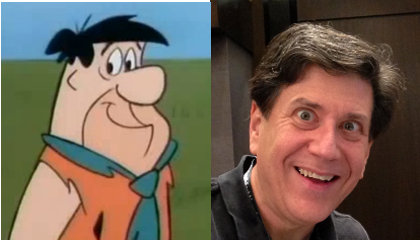 Comments? I doubt it is as divisive as the color of that dress.

[Note: Does any else remember that short lived show Wait Till Your Father Gets Home? Hanna-Barbera’s The Flinstones was set in the past, and The Jetsons was set in the future, and this was the show for the present. Yes, I’m old]

As the evening wound down I helped Damian get his gear back to the hotel and then we hit the bar in the Hilton. I had met the wonderful Stuart Langridge earlier, so I offered to buy him a drink (and learned that there should be no fruit in beer) and before you knew it we had a nice little crowd in our little corner of the bar. While I love going to conferences for the things I learn, sometimes it is the moments around the conference that create the most memories.

On Sunday I managed to hit the booth right on time (at the ungodly hour of 10am) and then, before you knew it, it was over. The wonderful Cynthia Aguilera was the winner of our third and last set of Frontalot CDs. 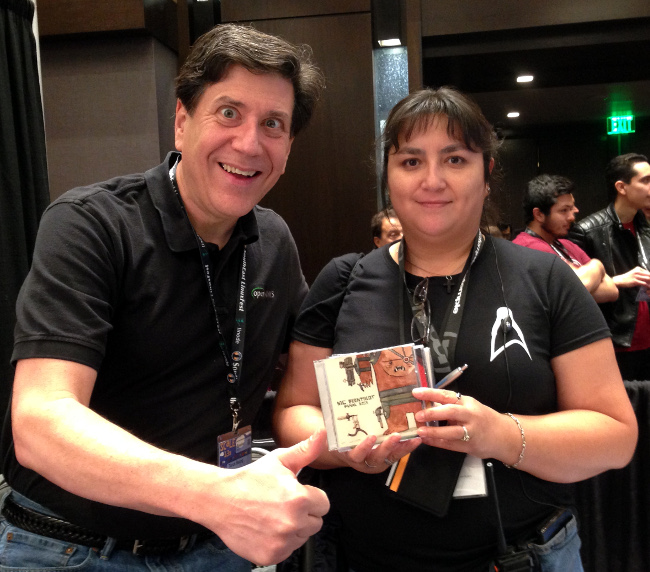 After we got everything packed up for the trip home, I just kind of crashed. We ended up watching the Oscars and then going to bed.

Thanks to everyone who made this year’s SCaLE conference awesome, and you can next catch us as April’s POSSCON.

One thought on “SCaLE 13x – Days Two and Three”