The most frustrating thing about this project was getting the Electronic Program Guide (EPG) to work. Unfortunately, it isn’t easy.

This was one of the things that TiVo excels at doing. You are basically paying for a very up to date program guide. They also offered something called a “Season Pass” which would cause all of the episodes of a particular program to be recorded without having to explicitly select them.

When I got my EyeTV system, this part was a snap. They partner with TV Guide to provide the service, and unlike TiVo’s $14.95/month fee it is a yearly fee of $19.95 (with the first year being included with the unit).

Even my Sony Bravia is able to get over the air EPG information, but I wasn’t able to get that to work with OpenELEC.

The actual EPG configuration occurs in the Tvheadend software. You get a screen like this: 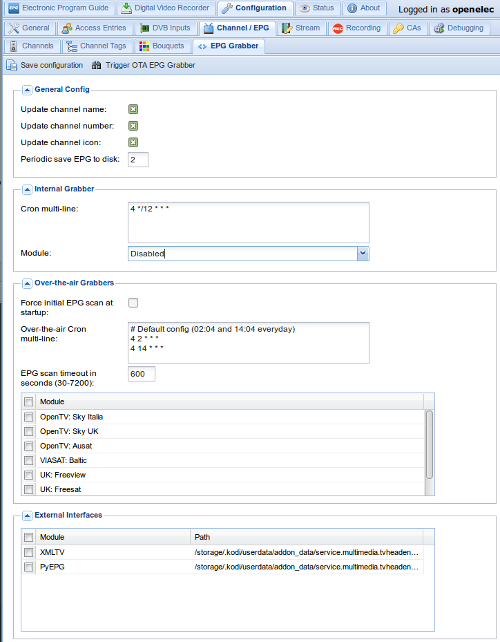 There are three main areas of configuration: the “Internal Grabber”, “Over-the-air Grabbers” and “External Interfaces”.

The internal section displayed a cron job but no module options. None of the OTA grabbers seemed to work, and there wasn’t a module for North America. That left the external grabbers.

I started digging around and found that it really isn’t easy to get this running.

One tool that kept coming up was XMLTV. On the frontend configuration for the Tvheadend client in OpenELEC they even have a section on it: 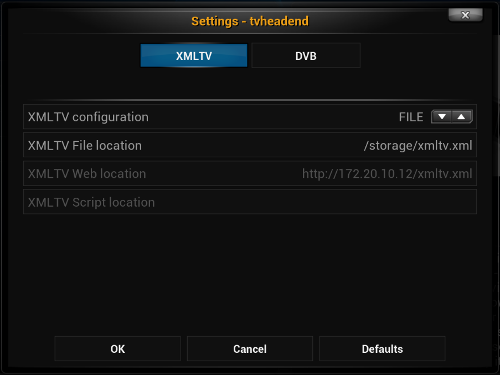 XMLTV is a number of things, such as a format for representing TV listings, but it is mainly a set of tools “to obtain, manipulate, and search TV Listings”. It contains programs that will connect to an external source to gather EPG data.

Unfortunately, OpenELEC doesn’t ship with it. There is a script called “tv_grab_file” which is used to manage the XMLTV data, but not to actually acquire that data.

For me the easiest solution was to install XMLTV via apt on my home Debian server. It comes with a script called tv_grab_na_dd that can be used to fetch the data.

But I still wasn’t done. I needed a data source. It looks like all the cool kids use Schedules Direct. They are a non-profit that promotes open source software and provides, for a fee, access to EPG information. Since they had a free trial I signed up, configured my tv_grab_na_dd script to access their information, and voilà, I had an XML file with what appeared to be useful information.

I placed that in the webroot of my server, and then configured OpenELEC to point to it. Nothing happened. So I copied the file to the OpenELEC server, modified the client to use the “FILE” method (see screenshot above) and nothing happened.

I finally had to uncheck the XMLTV checkbox under “External Interfaces”. When I did that I finally had something under the “Internal Grabbers” section. 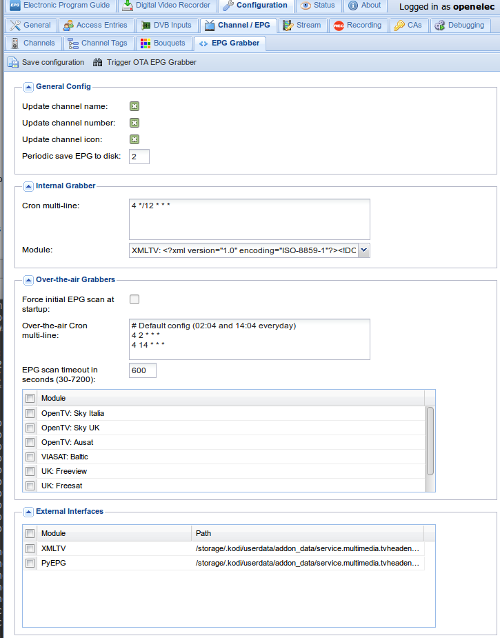 The last chore was to associate the channels I had discovered with the program guide. 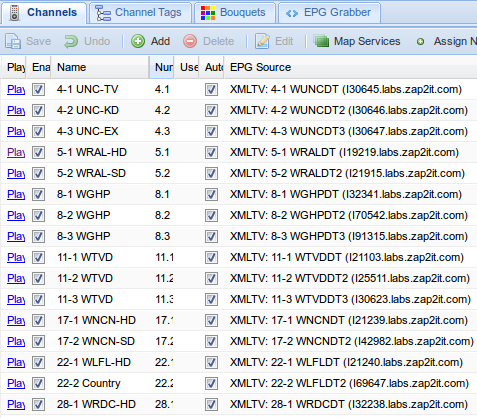 Prior to getting all of that to work, the drop down for “EPG Source” had been blank.

So, to summarize my steps:

Whew. So far everything has been working well. You want to be sure not to fetch the data too often as that can overwhelm the Schedules Direct servers. My current seven day XML file is about 10MB.

I went ahead and signed up for a year account for $25, bringing my total to $705.92 (the hardware was $680.92 and the software was, yup, $0). It’s quite possible to shave off about $200 by going with less memory and a smaller SSD (or using an HDD) or if you already have a server to run the Tvheadend backend you could get by with a Raspberry Pi.

My next steps are to play with all the cool add-ons and to try and organize my pictures in a fashion where they would be usable with the system. More fun for me.