One of the things that bothers me a lot about the software industry is this idea that proprietary software is somehow safer and better written than open source software. Perhaps it is because a lot of people still view software as “magic” and since you can’t see the code, is must be more “magical”. Or perhaps is it because people assume that something you have to pay for must be better than something that is free.

I’ve worked for and with a number of proprietary software companies, so I’ve seen how the sausage is made, and in some cases you don’t want to know. Don’t get me wrong, I’ve seen well managed commercial software companies that produce solid code because in the long run solid code is better and costs less, but I’ve also seen the opposite done simply to get a product to market quickly.

With open source, at least if you expect contribution, you have to produce code that is readable. It also helps if it is well written since good programmers respect and like working with other good programmers. It’s out there for everyone to see, and that puts extra demands on its quality.

In the interest of making great code, many years ago we switched to the Spring framework which had the benefit that we could start writing software tests. This test driven development is one reason OpenNMS is able to stay so stable with lots of code changes and a small test team.

What’s funny is that we’ve talked to at least two other companies who started implementing test driven development but then dropped it because it was too hard. It wasn’t easy for us, either, but as of this writing we run 5496 tests every time something changes in the main OpenNMS application, and that doesn’t include all of the other branches and projects such as Newts. We use the Bamboo product from Atlassian to manage the tests so I want to take this opportunity to thank them for supporting us. 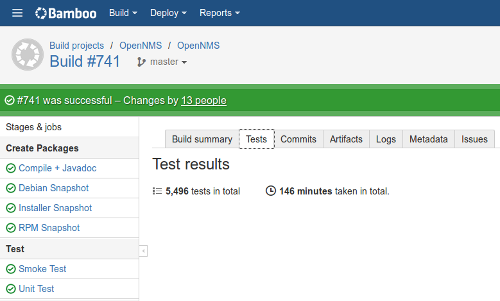 OpenNMS 14 contained some of the biggest code changes in the platform’s history but so far it has been one of the smoothest releases yet. While most of that was due to to the great team of developers we have, part of it was due to the transparency that the open source process encourages.

Commercial software could learn a thing or two from it.