For many years I’ve had an irrational fear of France. I don’t speak French and through television and other media I’ve been led to believe that the French are rude and distant, and the small amount of time I’ve spent in that country (or in French speaking Switzerland) did little to allay those fears.

Which is a shame since there are aspects of French culture that really gel with me. Good food and good company, a decent work/life balance and an appreciation for beauty and art are things that are sometimes lacking in my native society. Of course, the anal-retentive part of me would cringe at other aspects of French culture, such as the general lack of urgency over most things, but still I think there is more to love than hate.

For the first few years after I started working with OpenNMS I really couldn’t take a proper holiday. I might be able to squeeze in a three day weekend here and there, but the luxury of unplugging for a couple of weeks was beyond me. A decade later things have changed, so this year Andrea and I decided to take a long holiday with a week in the UK and a week in Paris.

David and I had been in Paris back in 2008 but I’d never really had a chance to see the city. Of course, the reason Andrea and I went had little to do with the art or history of the place: Paris is crazy thick with Ingress portals. Seriously, we flew across the ocean to play a computer game.

This, of course, required the purchasing of a local SIM card. Now one of my favorite things about being involved in OpenNMS is that almost anywhere I go I can find someone who likes the application. I posted a note to the mailing list and got a nice reply from Daniel Ranc. Daniel is a consultant and a professor at INT (Telecom & Management SudParis) and uses OpenNMS as part of his courses.

He recommended that we use SFR, as they had a plan where we could get 2GB of data for 30€. Now the challenge was to find a store.

Next to our hotel was a Bouygues outlet so we stopped there first. The lady in front of us was buying an iPhone 6 Plus (that sucker is huge) but even though it was iPhone launch day, I assume any craziness happened early in the morning. The salesperson told us that a “carte SIM” with 3GB would be 50€, which seemed spendy, so using the hotel wi-fi I found an SFR store a few blocks away (Paris is a very walkable city).

The guy at the SFR store told us that we could buy the SIM card there, but in order to “charge” it we would need to go to the “Tabac”. In Paris a Tabac is a part of a cafe that sells things like cigarettes and lottery tickets and, apparently, mobile phone access. You can identify them by iconic red and white signs.

While I wasn’t sure I fully understood his directions, we found what looked like the right place, but the lady behind the counter said she couldn’t help us. Thinking we had the wrong place, we wandered around for an hour or so until we met a man who told us where to go, which turned out to be the same place we started. This time we tried a little harder, and a gentleman helped out and sold us two “recharge” tickets for 35€ each. Since they worked we figured Daniel was just off on the price, and we happily started hacking portals.

That lasted about a day.

Apparently what we bought had something like a 100MB limit which we promptly exceeded, so this time I used a combination of Chrome and Google Translate to navigate the SFR website. I found the exact plan that Daniel described, but the site wouldn’t accept any of the four credit cards I fed to it (even though a legit-looking confirmation box with the proper bank name popped up each time). So I dutifully copied down the proper plan on a piece of hotel stationery and off we went to the Tabac.

By this time I had picked up more French so I was all “Bonjour, pouvez-vous m’aider, s’il vous plaît” and I handed the lady (the same one as before) my hand written piece of paper and she was able to set us up with no problem. It was the start of my becoming a lot more comfortable in France. We then wandered around our neighborhood and spent a lot of time in the Parc Monceau 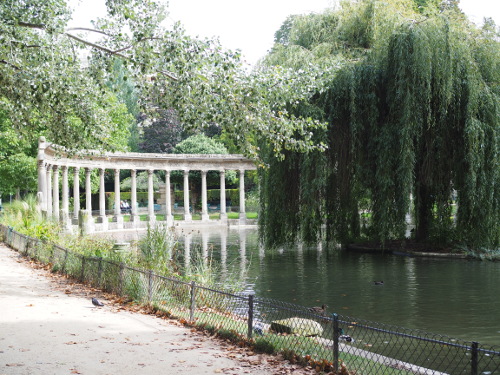 My French improvement would continue on Sunday when I actually got to meet Daniel in person. He and his son Lucas picked us up at the hotel and took us to the Île Saint-Louis.

Paris is a roughly circular city as defined by a ring road highway that surrounds it. It is divided into 20 administration zones, called arrondissements. The first arrondissement is an island in the middle of the Seine called the Île de la Cité (home of Notre Dame and the oldest part of Paris) and the others spiral out from there. The Île Saint-Louis is in the 4th arrondissement and our hotel was in the 17th. You can always tell where you are by the post code: 750xx where xx is the arrondissement. 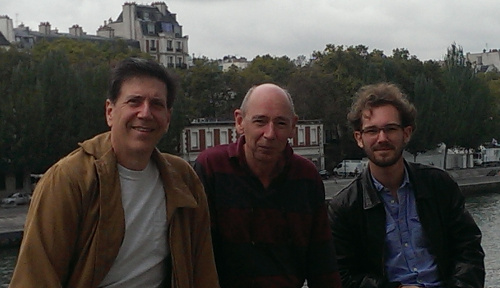 We found a place to park and walked around the island. Daniel and I talked tech while Andrea hacked portals, and we found a nice café for lunch. Parisians love to eat outside and this was no exception, except that we were lucky to be under an awning when a short shower broke out. With that exception and one other evening the weather was perfect for the entire week.

He and Lucas had to run to do some errands after lunch, but we made plans to meet up later in the week.

Most of our time was spent in parks. The public parks in Paris, even the small lesser known ones, are amazing, with priceless works of art available for everyone to enjoy. Since priceless works of art translate easily into Ingress portals, we had a lot of fun wandering around and linking them up. I know I was supposed to be inside the Louvre with thousands of other people, but I have to say that I loved being outside in the nice weather looking at beautiful things.

On Tuesday we faced our usual travel challenge of laundry. It is hard to pack for two full weeks, so we usually plan to do some laundry during our trips. In a lot of countries, like New Zealand, you just drop it off for a “wash, dry and fold” and come back a few hours later. Not so in Paris, but we did find an “laverie automatique”. This is where I learned another lesson of Parisian life: hold on to your coins.

America is one of the few places that doesn’t use what I would call high value coins. Most countries I visit have the equivalent of a one and two dollar coin, whereas in the US the highest value common coin is a quarter dollar. The machines in the laundry required coins and change was pretty much impossible to find. Seriously, there are banks in Paris with “no change” signs on them. Still we managed to scrounge enough together with some strategic purchases from the marché across the street (where the lady was so kind and delightful while she explained that she couldn’t give me more coins) to get the clothes cleaned.

That night we met up with Daniel, Lucas and Daniel’s wife Clarisse at a place called La Gueuze that specialized in Belgian food. While this naturally included Belgian beer (yay!), to me Belgian food is synonymous with mussels (moules).

Here is where I witnessed the most rude event of the whole trip (a minor one), and it was funny because it was between two Frenchmen. We had some confusion on the order. Three of us wanted mussels, but Andrea wanted the set “formula” menu (one appetizer, one main course and a dessert chosen from a list). At first Daniel thought Lucas wanted mussels as well so he ordered four and there was a lot of spirited talking around the table in both French and English. At one point the waiter just sighed, snapped the ticket off his pad, crumbled it up and walked off.

About five minutes later he came back and he and Daniel interacted as if nothing had happened, and we ended up having a nice meal. Lucas showed me a mathematical brain teaser that I hope to try on someone real soon (I got about 60% of it right).

I had snails. I think I would eat pretty much anything doused in butter and garlic. 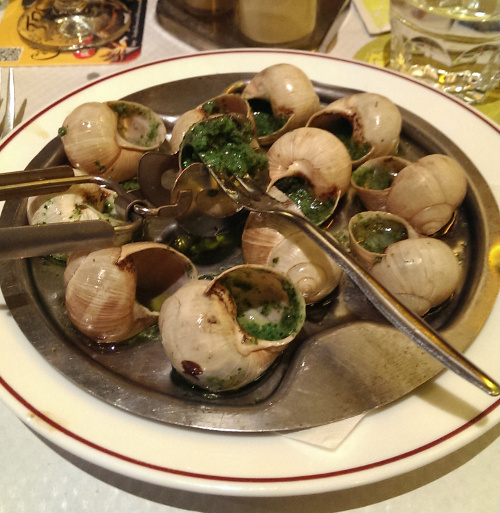 Earlier we had met Daniel near the Luxembourg Garden, which was just swarming with portals, so on Wednesday we came back and spent several hours there. It was once the grounds for the palace of Marie de’ Medici, and the building is now home to the Senate chamber of the French Parliament. On the grounds are a model that was used for the Statue of Liberty as well as the outstanding Medici Fountain. 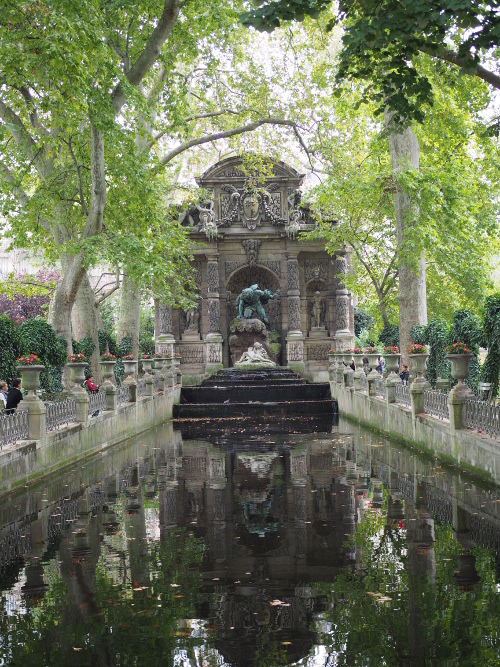 On Thursday we did our only real touristy trip by visiting Versailles. I’ve been wanting to visit there for years, especially after reading the Baroque Cycle. I often laugh when people, especially Americans, criticize French military might because if your skin is pale your ancestors lived in fear of King Louis the XIV. The scale of Versailles defies description – the Gardens cover 800 hectares or over three square miles. We spent over ten hours there, and it was really cool to be there in the evening after the crowds had left. 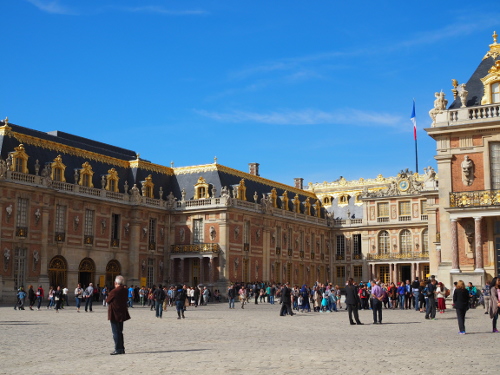 We covered a lot of Paris. We bought a “Paris Visite” ticket that let us ride any public transportation (bus, tram, metro or RER) within the ring road. 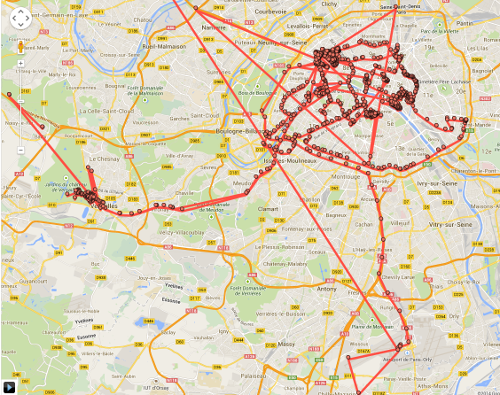 The only regret is that I should have gone with the Bouygues SIM card. Not only did I spend too much for ours, the SFR coverage would have issues, especially near Montparnasse. The phone would show 3G but nothing would work. It seemed limited to that one particular area – hey, SFR, if you are reading this, get OpenNMS.

Overall, it was an amazing trip and I’m eager to return. I found the Parisians to be friendly and the city itself very beautiful. It was a little spendy, even with our airfare and hotel being covered by frequent traveler points, so I am motivated to make OpenNMS successful so that I can visit as often as I like.