I got to spend a few days down in Austin this week. I like this town, and as most people know it has become a bit of a hotbed for tech with a lot of companies either moving here or opening offices (I just found out that Atlassian, makers of Jira and Bamboo, among other things, is opening an office in Austin).

Usually when I come to town I get to see Eric Evans. Eric, the guy who coined the modern usage of the term “NoSQL“, lives an hour away in San Antonio and outside of the daily scrum call I don’t get to see him as much as I’d like. However, he just had rotator cuff surgery and when I sent him a text about meeting for dinner his reply was “I’m not yet wearing pants and can’t tie my shoes so the answer is probably no.”

Yeah, there is a “no pants” theme to this post.

On a whim I decided to see if my friend, favorite mad scientist and evil genius William Hurley (aka whurley) was around. As luck would have it, he was.

Speaking of people I don’t get to see very often, whurley is one of them. I think it would be a full time job just to keep up with his projects, and we haven’t had a chance to spend any time together for several years so we tried to cram a lot of catching up into a short evening. 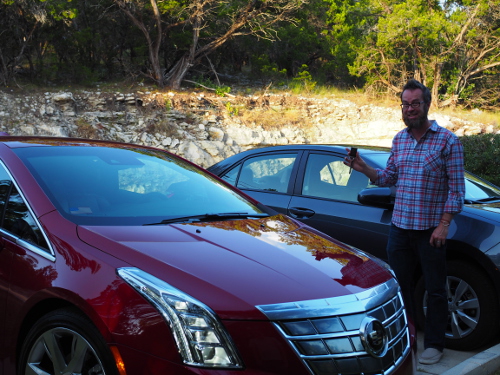 When we drove up to his house the first thing I noticed was a candy apple red Cadillac ELR parked out front. whurley has a large Twitter following, so Cadillac gave him the car to drive and tweet about. This is Cadillac’s entry into the luxury electric hybrid market. It has pretty aggressive styling for a Cadillac, but it is more of what we old folks used to call a “2+2” instead of a true four seat car. It took some acrobatics to get three full sized adults into it for a short trip to grab some Chinese takeout.

Another pleasant surprise was to find out that he is now married, and I got to meet his bride Pamela. As might be expected with anyone associated with whurley, she is exceptional, and welcomed us into her home with short notice.

whurley knows that I am a privacy advocate, so he showed me a TED talk he did on the issue, but instead of leading with, say, references to 1984, he goes back in time to talk about the Jacquard loom. This loom was one of the first programmable machines, a forerunner of computers, and it was used to manufacture cloth for clothing. If you think about it, clothing could be considered the earliest form of privacy, so it is a bit ironic that this ur-computer was used to create privacy whereas modern computers are now used to decrease it.

One of the reasons I like being around him is he makes me think. As an old guy, I am constantly amazed at how the younger generation seems to be so eager to give up privacy by sharing pretty much all details of their lives on-line. I’ve also noticed that there seems to be less concern about nudity. I’m not saying that all twenty year olds are running around naked, but compared to 30 years ago when I was in high school, the socially accepted norms for modesty have changed greatly.

But now this seems to make sense. If clothing is the primal form of privacy, one would expect this from a culture in which privacy is less important. And I’m not sure this is a bad thing, as I don’t believe anyone should be ashamed of their bodies, plus it helps me toward earning my “Dirty Old Man” merit badge.

In David Brin’s book Earth he envisions a world without privacy, and there are a lot of positive aspects to it. Recently Scott Adams has blogged about the subject, and he makes a number of valid points. The issue I have is that the world we are creating isn’t a utopian transparent society but instead one in which an oligarchy controls the majority of information to use however they see fit, and to me that is dangerous.

So I plan to strive to increase my privacy and, with few exceptions, I’ll keep my pants on.