The best perk of my job is that I get to meet some truly amazing people. From the people I work with, to others in the open source world, to people like Damian Hess, my life has definitely been enriched by the people in it.

I was able to sponsor Damian, aka MC Frontalot, to perform at the Southeast Linuxfest (SELF) last year in Charlotte, and it was a great weekend. One evening ended up with a group of us in a hotel room, and Damian played some of the raw tracks from what would become his sixth studio album, Question Bedtime. 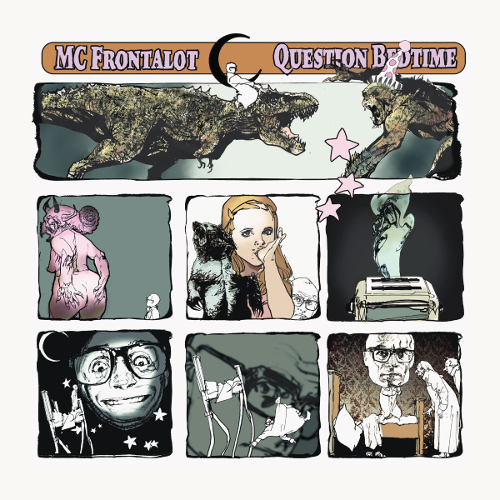 When he told me that he was doing an album based on bedtime stories, I was like “Wha?”. It didn’t seem to fit in with his “nerd” focus, but now that the album is out I can see why it works. First, while classics like “Goldilocks” and “Little Red Riding Hood are represented, most of the songs reference more obscure tales. Fairy tales are, by definition, fantastical, in much the same way as comic books or other geek friendly literature, so it isn’t as much of a stretch as I originally thought.

One of the tracks I heard that night at SELF was called “Devil in the Attic”. It is based on an obscure Japanese fairy tale called “The Ugly Son“. Such was their vanity, the parents of a very beautiful girl send out notice that she should only be wed to the fairest youth in all the land. Some grifters with a deformed (but intelligent) son think up a plan to wed him to her. They claim he is the fairest in the land and a courtship ensues, but based on tradition they do not see each other at first. On the night of the wedding, the boy’s father goes up into the attic of this grand house and starts claiming to be a demon who will visit a curse on the boy for daring to wed the girl, which the demon claims for himself. The curse turns out to be to deform the features of the boy – thus explaining his looks once they are revealed.

Front puts his own spin on the tale, turning it into a story of the oppression when women were considered property, as well as a lesson on conceit. In the chorus the father of the girl brags “Anything you could have, we have it. Even got a devil in the attic.”

Well, more than a year later, the CD Question Bedtime is now available for pre-order and immediate download. I’ve been listening to it for several weeks now and just got the final copy when it released this week.

The “his own spin” theme flows throughout the album. In “Gold Locks” the classic “Goldilocks and the Three Bears” story is retold from the bear’s point of view, portraying Goldilocks as the boogie man, creeping into your house to chop you up and eat you. The opening track “Start Over” is the story of “Little Red Riding Hood” as told by Front to a group of children who, in the chorus, exclaim “That ain’t how it happened”.

Just like in Solved, the album is laid out with tracks separated by little interstitial skits, this time with the theme that Front is a babysitter talking to his charges. Only they are all adults. In the opening one Front is trying to get “Li’l Kyle” (comedian Kyle Kinane) to go to sleep, and Kyle questions the arbitrary nature of a “bed time” – hence the name. It’s funny just to hear the arguments presented by the “children” in the skits – I wish I could have thought up some of those when I was younger.

I like every track on the album, but as can be expected I like some more than others. Almost all of them have a hook that will give you more earworms than the victims in The Strain. This morning I was walking around getting ready for work with “Gold Locks, gets in through your open door” on repeat in my brain.

My favorite track is “Two Dreamers” which is based on a tale from 1001 Arabian Nights. What has always attracted me to Front’s work has been the quality of the music. Too much of nerdcore rap tends to focus on the lyrics. While the lyrics are important, and Front excels at them, it is the music that takes it past novelty act and into valid art. In “Two Dreamers” there is even a bit of auto-tune, which I usually shun, but in this case it works. Quite frequently while listening to the album I switch over to Banshee and put that track on repeat.

Of course the track that is bound to be talked about the most is Wakjąkága. It is based on a tale from the native American Ho-chunk (Winnebago) tribe. Let’s just say that when I was learning how classical mythology explains things like why the sun rises and sets and why we have winter and summer, my instructors skipped over this little origin story.

If you are an MC Frontalot fan, you’ll like this album, and if you haven’t been exposed to him before, this album is his most accessible CD for non-geeks. It showcases his progression as a musician, and while my favorite tracks from Solved (“Critical Hit”, “Stoop Sale”, “Victorian Space Prostitute”) resonate with me more than the tracks on this album, they are offset by a couple of tracks I either don’t care for or actively dislike, such as “Invasion of the Not Quite Dead”. Overall, I like the album Question Bedtime the most, and tend to listen to it straight through.

As a bonus if you are an audio nerd, the download includes an 88.2kHz FLAC version which is as close as you can get to the music exactly as he mixed it. Be sure to read the README that comes with it though – if your audio card doesn’t support it he also ships a mastered 44.1kHz FLAC version that will sound better than if your media player is forced to downsample the 88.2kHz one.