Friday was pretty much the “Dev Jam Results Show”. Mike suggested that the various teams get together and present their work. He recorded it live from his iPhone using Ustream and the raw (and I mean raw) video is available for your viewing pleasure.

That OpenNMS could use a new user interface is a given, and the decision was made to base it on a technology called AngularJS. The first demo shows off some of the work that was done to build a framework for the new GUI.

This includes a “plugin” architecture that will make it easy to add functionality to the system as well as to embed existing code that, while not written in Angular, is still useful. Ron even managed to get KSC reports to run under the new code, complete with dynamic updates.

Work that still remains to be done include formal authentication (currently the new GUI just gets a session cookie from the old one) as well as a greater granularity for ReST permissions, as now normal users get a lot of data and admin users get all the data. This would be very useful for things like multi-tenancy.

When we wrote the provisioner, we knew we had something special as no other management system seems to take discovery as seriously as OpenNMS. As more and more people find novel ways of using this system, we realized that the user interface could use some improvement. In this section Alejandro demonstrates the changes he has made to the interface for creating and managing requisitions, also built on Angular.

Those of you that follow OpenNMS in the news might have seen a press release a couple of weeks ago from a financial trading services company called TMX Atrium Networks. Dr. Gallen, our man in the UK, worked with them to build an interface for monitoring latency across the network.

Yesterday I talked about the New Time Series database that we are building as the data storage backend for OpenNMS. I lifted a lot of that from this portion of the demonstrations. The ability to have an incredibly fast and highly scalable data store is key for our goal of making OpenNMS the de facto network management platform of choice.

The second video stream features a talk about “snee-po”

SNMnepO, or OpenNMS spelled backwards, is a project to create a distributed data collector with horizontal scalability. The idea is to add data collection to our remote poller, and Seth’s demonstration shows data collection being performed with the collectd process disabled.

Coupled with the newts data storage backend, this new distributed collector will insure that OpenNMS can scale to meet any data collection needs in the future.

The final stream focuses on work being done by our German team.

Christian demonstrates the new outage timeline that I talked about earlier in the week.

Dustin shows a new feature that exposes collected data from the RRD files via ReST. This can allow for another integration point where collected data can easily be used by other applications.

The last demo was done by Ronny (presenting work that was also done by Dustin) on the Provisioning Integration Server (PRIS). As mentioned above, the ability to tightly integrate OpenNMS with provisioning systems is a key feature of the platform. Originally done to integrate with OCS Inventory NG, the system has been extended to allow for integration with pretty much any system.

Considering that these demonstrations were pretty much ad hoc, I was delighted to see how much was accomplished in just a week. It is one of the main reasons I look forward to Dev Jam every year.

We celebrated that evening with a trip to Republic. 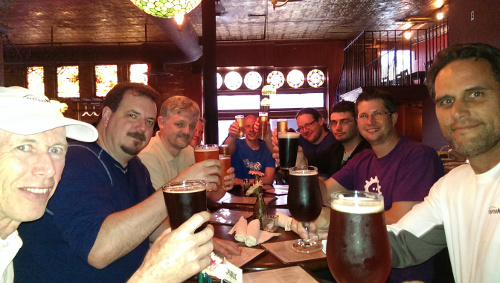 Let’s just say the evening went a little downhill from there, but I did manage to make it back to the dorm.