Since switching to using Linux as my primary desktop, I’m always curious as to what options are available to me besides my default go-to distro of Ubuntu.

While Ubuntu 12.04 (the LTS version) is one of the best desktop operating systems I’ve ever used, I’ve grown less enchanted with each subsequent release since then. Part of it comes from some of the choices made by the Ubuntu team (such as the tight integration with Amazon) and I can work around most of those, but I’ve had numerous stability issues with Unity that didn’t really exist in the older releases.

When Debian wheezy came out, I decided to give it a shot as a desktop operating system. I’ve used Debian as a server O/S for over a decade, but the main thing that makes it great for servers, the cautious nature of changes and inherent stability, kind of suck for the desktop. I’ve discussed this with Eric, who is both a Debian user and a Debian committer, and his reply is to ask if you really need to have umpteen updates to firefox, etc. I can see his point, but if I’m using, say, Gnome, having access to the latest release can have a huge impact on the user experience.

So I didn’t like wheezy as a desktop, but before going back to Ubuntu I decided to check out Fedora. It does support Gnome 3.8, but I ran into another issue that affects almost all distros outside of Ubuntu, which is the ability to easily encrypt one’s home directory.

Ubuntu, in the install process, let’s you choose to encrypt your home directory. While I’m firm believer in xkcd’s interpretation of what would happen in the case of someone wanting access to my data, I still like to take some precautions.

I don’t like whole disk encryption for a couple of reasons, namely the possibility of a performance hit but mainly the fact that I can’t remotely reboot my computer without having someone at the keyboard typing in a passphrase. I figure encrypting /home is a good compromise, especially since the key can be tied to the user’s login via pam.

I tried to get this to work on wheezy, but I found the performance was spotty and sometimes I’d login only to find nothing in my home directory. I didn’t spend too much time on it, since I was eager to use Gnome 3.8, but was disappointed to find that Fedora didn’t allow one to easily encrypt their home directory either.

Before giving up, I decided to take a shot a Arch Linux. I’ve been hearing wonderful things about this distro at conferences, but the installation process taxed even me. It it seriously bare-bones, but that it supposed to be part of the appeal. The philosophy around Arch is to create a distro with just the things you, the user, want and with access to the latest, greatest and, supposedly, most stable code.

It appealed to me as a great compromise between Debian and getting the latest shiny, but I couldn’t get it installed. You end up having to create your own fstab and somehow the UUIDs got screwed up and it wouldn’t boot. It also didn’t support the encryption of the home directory as an option out of the box, but I was willing to try to create it as I did under Debian if I could get it up and running. I don’t think it was impossible for me to get working; I simply ran out of play time and decided to try Arch another day.

Linux Mint 15 is a fork of Ubuntu 13.04. It removes some of the choices made by the Ubuntu team that raise the hackles of privacy advocates, and it introduces its own desktop manager called Cinnamon. 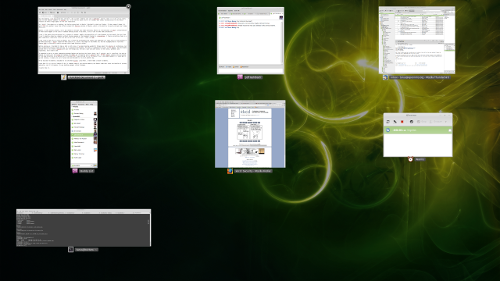 I can’t really say what I like about it. It’s pretty, with the exception of the default desktop background (seriously Mint, yeah I know there’s history there but, sheesh) which is easily changed. The Terminal theme is one of the nicest I’ve used. There’s a pop up menu like Gnome 3, but then there’s these little dashlet thingies that let you launch things quickly, and a notifications system that is easy to access without getting in the way.

Running applications and open windows show up in a bar, like Gnome 2 or Windows, but I don’t find myself using that all that much. It is pretty easy to customize the whole thing, such as changing the location of things as well as setting hot corners.

There are a couple of issues. The menu doesn’t seem to index everything like the Dash in Unity, and I had gotten used to just typing in a few characters of a file name in order to access it. It does seem to remember files you use, so once you have accessed a particular file you can find it via the menu, but it does impact workflow not knowing if it will show up or not. The other issue is that it is still bound to Ubuntu, so they have some common bugs.

For example, I use the screenshot app a lot. Under Ubuntu 12.04, when I’d take a screenshot a dialog would appear asking me to save it. A suggested filename, based on timestamp, would be highlighted followed by the .png extension. I could just start typing and it would replace the highlighted text with what I had typed. That got broken in 12.10, so I’d have to reselect the text in order to set the filename. Not a big deal, but a little bit of a pain.

When I switched to Mint, it had the same issue. Note: in the last day or so it seems to have been fixed, since I am not seeing it as of today.

Of course, you get a lot of the Ubuntu-y goodness such as encrypted home directories out of the box with Mint, but Mint may end up being on the winning side of the Wayland vs. Mir argument, since Cinnamon isn’t tied to Mir (or Wayland for that matter).

For those of my three readers with a life, you may not be aware of either of those projects. Basically, for decades the control of graphical displays on most computer screens is based on a protocol called X11. Under Linux that implementation is currently managed by the X.Org project, a fork of the Xfree86 project that was the Linux standard for many years. The next generation display server arising out of X.Org (well, at least many of the developers) is called Wayland, and in the next few years one can expect it to become the default display server for most Linux distros.

Ubuntu, however, has decided to go in a different direction by launching its own project called Mir. I believe this is mainly because their goal of having a unified user interface across desktop, tablet and phone devices may not be easy to meet under Wayland. My very elementary understanding of Mir is that it allows the whole display space to be managed like one big window – easy to resize under the different screen resolutions of various devices – which differs from Wayland, but I could be making that whole part up.

I’m a huge fan of Ubuntu and I believe that those that do the work get to make the decisions, but I also believe that Wayland will have a much larger adoption base, ergo more users and developers, and will thus be more stable and more feature-rich. My own experiences with Unity’s stability on later releases indicate a trend that the first Mir releases will have some issues, and I’ve decided that I’d rather stick with something else.

For the time being that seems to be Mint with Cinnamon. Not only can I get work done using it, the underlying Ubuntu infrastructure means that I can get drivers for my laptop and still play Steam games. I still run Ubuntu 12.04 on my home desktop and laptop, but that is mainly due to lack of time to change over to Mint.

So, if you are looking for a solid Linux desktop experience, check out Mint. I am still amazed at what the free software community gifts me with every day, so my desktop of choice may change in the future, and I’ll be sure to let you know if I find anything better.

5 thoughts on “Mint with a Dash of Cinnamon”