About 15 years ago, I took a job that required a lot of travel, and I decided that I needed a new piece of luggage. I did the usual thing: I went to the mall and visited the three or so stores that sold different sizes and types of bags, and I settled on one from Samsonite. Instead of buying it there, however, I wrote down the model number and then did a search on-line. I found a site that sold the same bag, but it was also available in a larger number of colors instead of just black, and the price was about 35% of what the stores were charging. My wife found it ironic that I was bragging about both being able to get a deal on it and that I didn’t have to carry it to the car from the mall. It’s “luggage” – she pointed out.

That got me to thinking about the future of retail.

I buy a lot of stuff on Amazon, mainly due to their Amazon Prime service. For a flat rate you can get a large number of things that you buy on Amazon shipped to you in two days (sometimes less) and for a fee of US$3.99 per item you can get it in 24 hours. I love this service, since I live in a pretty rural area and for me to visit any major store requires a drive of about 30 miles each way. Depending on the vehicle I use, this can cost me between two to four gallons of fuel plus my time. Also, a lot of the things I buy aren’t common, so there would be the added task of calling around to various stores to see if they have the item I need. I figure Amazon saves me hundreds of hours per year.

Now this can be hard to reconcile with my desire to shop and buy local, but I do shop local for things like food. Plus, I figure that I’m doing the planet a favor, overall, since the UPS and FedEx trucks come to the office every day and my packages are just a small cost on top of that.

So where do “brick and mortar” shops come into play? I felt that Barnes and Noble had an advantage when they added the ability to return items purchased on-line to a “real” store, but anyone who has used Amazon’s return service knows how easy it is, so that advantage was short lived as people became more comfortable shopping on-line.

For many items I expect brick and mortar stores to become more like showcases than places where you arrive, pay money and depart with an item. Apple’s stores are much like this. While, yes, you can still leave with a MacBook or iPad, much of the retail space is often given over to a stage where salespeople show you either how to use the products or why you should buy the products, and any custom configurations are still ordered on-line.

Now I see a new thing arising, and it can be summed up in these shoes: 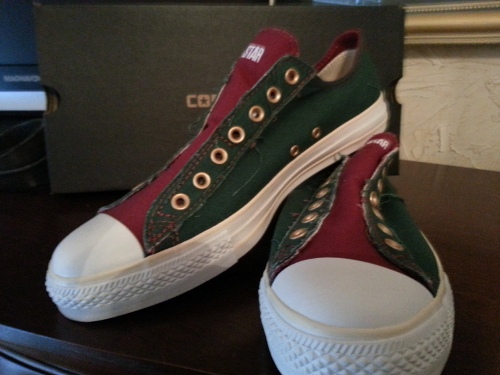 Yes. Bask in their awesomeness. Step aside Christian Louboutin and Jimmy Choo, there is a new top designer in town – moi.

I became a fan of Chuck Taylor Slips totally by accident. When I was in high school, I used to admonish some friends of mine who were dating (and prone to “public displays of affection”) with the line “I used to be disgusted, but now I’m just amused” from an Elvis Costello song, which also included the line “now the angels want to wear my red shoes”. I was hunting around on-line for some red shoes, and I found a pair on sale on Zappos. I thought they were normal Chuck Taylors, but it turns out they were a slip-on variety. I found that I really liked them as their slip on nature made it easier for me to navigate airports, plus they have little in the way of arch support. My friend David got me into barefoot running where one major idea is that the arch should be allowed to flex for better foot health, and while I’m not running around in Vibram Five Fingers 24×7 like he does, the Chuck Taylors work just fine.

Everyone used to comment when I wore my red Slips and a red T-shirt, so I decided to get some other colors. Black was easy, but I found that, at least on Amazon, there are limited color choices. However, on the Converse website, you can actually build your own shoe. Using a little on-line tool, I was able to choose many parameters about the Slip I wanted, and for just a small upcharge and about a three week wait time, I received a one of a kind shoe that was exactly what I wanted.

This excited me for a number of reasons. As a fan of open source software, I love the “do it yourself” nature of the process. And just like open source – if you don’t want to do it yourself, you can check out designs other people have created and use one of theirs. All we need now to make this perfect is a better marketplace and some form of micropayment strategy – come up with a great design and then get a small cut of the profit when someone buys a copy of your design (or you could choose to put it up for free or require a donation to a worthy cause, etc.)

Taken to the next step, when 3D printers start becoming common, it will be the designs that have value (there is a 3D “Physibles” section on The Pirate Bay even now).

The best 3D printers will remain out of the price range of most users for many decades to come. Don’t get me wrong, within five years people will probably be able to afford simple home printing machines, but I believe we’ll see the creation of local franchises where you can send your order and then pick it up later, kind of like Kinkos. Well, exactly like Kinkos – if I were FedEx I’d have a team on this now.

It solves a couple of problems. First, I will be able to buy local again. Why use Amazon when I can walk or bike down the road to my neighborhood “3D Prints ‘n Stuff”? Second, we’ll see a swing in manufacturing back into the US (or Europe, etc.), with new jobs created for running the printers, maintaining them and tweaking the designs. Third, I’ll be able to get exactly what I want when I want it pretty much wherever I am.

I predict we have at least 30 years before you buy your new TV from the Prints ‘n Stuff store versus a retail outlet, but I expect to see businesses building around this trend well before then. It’s pretty exciting.

And since their wings have got rusted, you know, the angels wanna wear my red shoes.