This was the week for the fifth annual OpenNMS Users Conference in Fulda, Germany. I had grand plans for blogging about the event, but as usual things got away from me and now I am getting started on the last day.

I spent last week teaching an OpenNMS course to ten students from a local company in North Carolina. While I love teaching people about OpenNMS, it took a lot out of me. Even for “the Mouth”, talking for 8 or 9 straight hours for days on end can be difficult.

The class ended on Friday and I had just enough time to head home, do laundry and pack before leaving for the airport on Saturday morning to head toward Fulda.

One of my tasks was to bring Ulf, the OpenNMS mascot. While I was waiting for my plane to Dallas (I hate flying through Heathrow so, yes, I went two hours in the wrong direction just so I could get a direct flight to Frankfurt) I ran into the UNC Womens Gymnastic’s team and they were kind enough to pose for a picture. 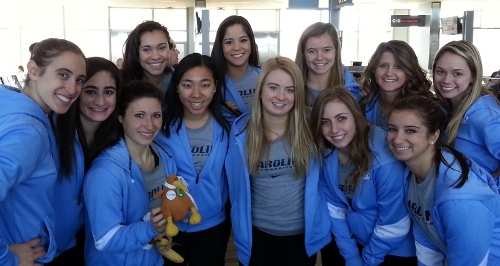 The rest of the trip to Frankfurt was pretty uneventful. At the airport I was met by Markus, who was acting as chauffeur, as well as Jeff who came in from Atlanta and Gary from Kansas City. We drove to Markus’s house where he and his wife Sandra had prepared a nice lunch. Some of the other people from the conference came by, and we had a great time chatting into the evening.

For dinner we visited a traditional German restaurant in Fulda called the Schwarzer Hahn. While we were eating I was able to ask a question about the German language. When I travel, I like to leave a tip for the housekeeping staff at my hotel. I asked them for the German word for “housekeeping” and they replied that there really wasn’t one, but I could try “zimmermädchen” or “room maid”. On Monday morning I left a note and three euros for the cleaning staff using my new found German words.

On Monday we prepared for the conference. For the last four years the conference had been organized by Nethinks, a certified OpenNMS partner with offices in Fulda, and I’ve been to Fulda on a number of other occasions (this year it was organized by the newly formed OpenNMS Foundation). When a friend of mine decided to make the four hour trip from Bayreuth just to visit me, I was able to show her around Fulda like a native.

Did I mention it was cold? I think it is kind of important to mention how cold it was – most of the time it was a few degrees below freezing – so the Fulda tour pretty much involved finding great places to eat and have coffee.

We ended up at Hochschule Fulda, the site of this year’s conference, and we got to see Christian’s Raspberry Pi controlled coffee maker. The interface is in the style of the replicator from Star Trek, and you can simply state, in German “Computer – coffee please”. It was kind of cool to see it work, but we found out that with Jeff’s accent the difference between “make a coffee” and “perform the cleaning function” are similar. (sigh) 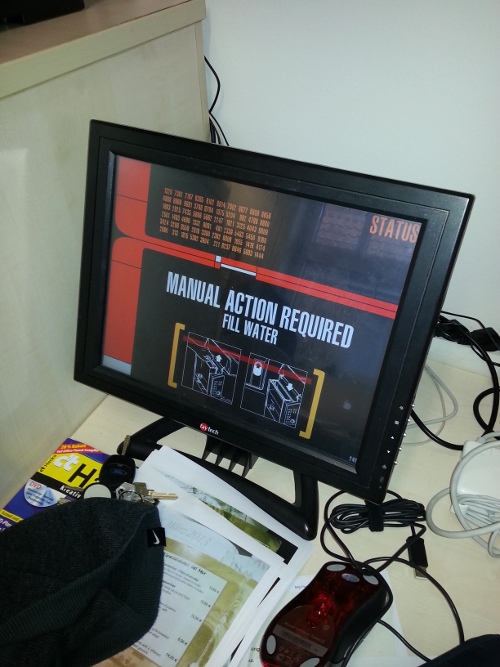 Speaking of language issues, when I got back to my room on Monday night I found that my note and three euros were still on the desk. When I met Jeff for breakfast and told him about it, he asked to see the note, and when I showed it to him he immediately started to laugh. I had written “Zimmer Mädchen Danke” and apparently by adding the space I was not addressing the cleaning woman but instead I was asking to have a young woman (Mädchen) for my room. While I had other German speakers tell me that it would have been a stretch for someone to arrive at that conclusion, others start laughing the moment I mention adding the space. Of course, being German, some of them simply point out that three euros is not enough money and that three 50 euro notes would have been more appropriate.

Tuesday morning I awoke to see about six inches of snow on the ground. Apparently it was bad enough in Frankfurt that they closed the airport. This did impact some of the people coming to the conference, but for those on trains it was only delays versus cancellations.

The conference officially started on Tuesday with a Basic Training Day. I tried to fit about two and half days of training into one, but even with some drastic cuts and pre-installing OpenNMS, it took ten hours to cover the OpenNMS basics. The class was cool and let me talk until 7pm, but I was really looking forward to Wednesday and my first “down day” in weeks.

Dinner was at the Havanna Bar, where we went to celebrate Jeff’s birthday. Tobi Oetiker had arrived (although a little late due to the snow) and it was nice to be able to spend some time with him. He had come up to do an RRDtool tool talk on Wednesday. After dinner I told everyone not to expect me until noon. 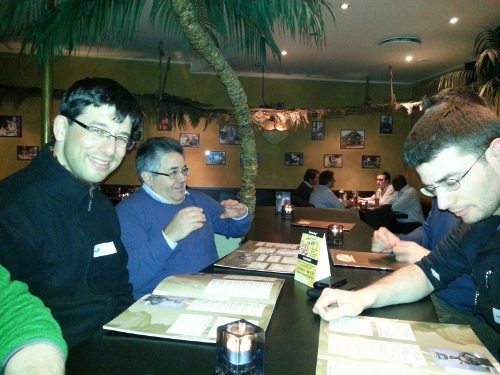 At 8:30 Wednesday morning my phone rings. Jeff is sick and can I come in and teach? I quickly shower, dress and head over to the school, where I proceeded to improvise eight hours of advanced OpenNMS training. I think it went well, and I only ran about 30 minutes over the allotted time, but to say I was exhausted at the end of the day would be an understatement.

I skipped the evening activities and tried to get a little rest, but soon realized that I needed a lot of rest. I felt ill, but I wasn’t sure if it was related to illness or just exhaustion. I went to sleep but woke at 5am in order to get my demo working for my “What’s New in OpenNMS” talk on Thursday morning. I literally had to build a fresh OpenNMS release since major bug fixes had been added by Ben Wednesday night, and I think the demo was well received with the exception that loading the VMWare topology database via OSGi failed (it had worked at the hotel).

I ended the talk with a Steve Jobs style “one more thing …” This is very hard to do with an open source project, since by its very nature open source software doesn’t hide anything (I was always amused by those fauxpensource companies that promised an “unveiling” of new software at various trade shows). My “one more thing” was to point out that the best new thing in OpenNMS is the OpenNMS Foundation. The creation of this independent users group means a lot to me, and I think it will insure the continued growth and success of OpenNMS.

At lunch on Thursday I heard a nice story. One of the attendees had a performance review via Skype the day before, and he was told that he had received a prestigious “innovators” award from his company. The reason was his introduction of OpenNMS to this large corporation that had been spending hundreds of thousands of dollars on products from HP and BMC. 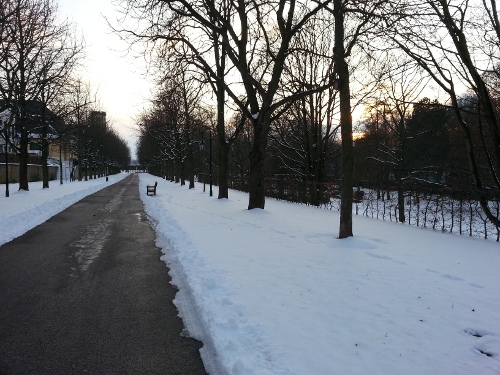 Unfortunately, I missed the rest of Thursday. I simply could not go on. I went back to the hotel and crashed, but managed to get up in time to visit the Havanna Bar for the conference social event. We had over seventy people in the upstairs dining room, and I spent most of the night with a table of Germans and Ville, a Finn who works at Vaadin and is living in Frankfurt.

At one point the talk turned to language, and it was pointed out that there are only five words in German that end in the letters “nf”. I thought that was cool, since the German word for “five”, fünf, is one of those words. However, no one at the table could name all five, and one person found an article that stated there were only four (apparently there is a dispute).

This bothered me, since I felt it was important that there be five since fünf would be one of them, so Ville and I decided to introduce the word “pünf” to the German language, which is defined as “the feeling when one realizes they should have stopped eating 15 minutes ago”. Both of us were feeling very pünf at that moment.

Speaking of language, I think we should all adopt the German term for the mobile phone, which is “handy”. My reasoning is that the word “phone” is outdated (I rarely use the “phone” function of my handy). John Scalzi in “Old Man’s War” called them “hand terminals”. That is accurate if a little long, so we should shorten it to “handy”.

At one point in the evening I remember looking around the room at everyone laughing and talking, and thinking “I put this in motion”. Not the conference, as that was done by better people than me, but when I took over the OpenNMS project in 2002 to keep it from dying, I never thought that it would grow so much beyond what I started.

I left the event a little early, as I was still not feeling my best, and I walked back to the hotel through the light snow. I got to sleep a little after 11pm and slept in until 7:30. When I awoke I felt better than I had all week, so I am hoping it that I was just tired and that I’m not getting sick.

So far on Friday I’ve seen a couple of cool talks. Almost all of the talks in this conference are being given by OpenNMS end users. I saw one on integrating OpenNMS with Salt Stack (a Puppet/Chef-like configuration management tool) and one on the new Scale Free Topology Provider.

I hate that I missed most of the talks yesterday, but I think the organizers have done a great job with this conference and I look forward to what they come up with next year.

The only thing I would change is the weather.

One thought on “2013 OpenNMS Users Conference”