On February 2nd I found myself with great seats to a world championship sporting event. No, it wasn’t the Super Bowl, but for the details, read on.

When I was last in Europe, not only did I spend some time in London, I also got to spend some time in Sweden. We are doing a lot of work there (more details soon) and I expect to be visiting a lot, but this was my first trip. It was pretty cool.

We are seeing a lot of interest in OpenNMS from Nordic countries. Things are booming there while the rest of Europe struggles – so much so that The Economist ran a special report on it. I’ve been to Norway a couple of times and Denmark once, and I’ll be in Finland later in the year so it was nice to get the set with this vist to Sweden. 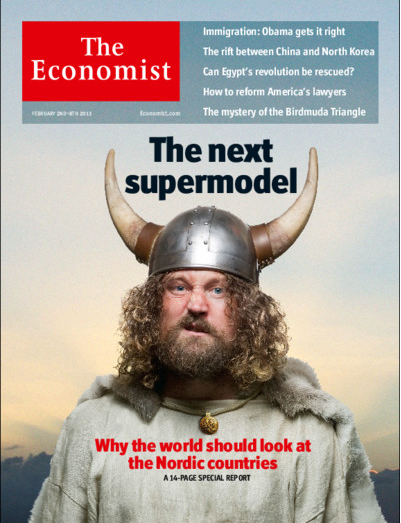 I had to rent a car to get where I was going, so I walked up to the Avis counter and asked for a Swedish car, seeing as how I’m in Sweden ‘n all. I had checked the Volvo S60 box when I ordered, so I was ready to tackle this country in all its Scandinavian glory (I stopped short of putting ABBA in my music collection).

They rented me a Peugeot. A Peugeot 508. 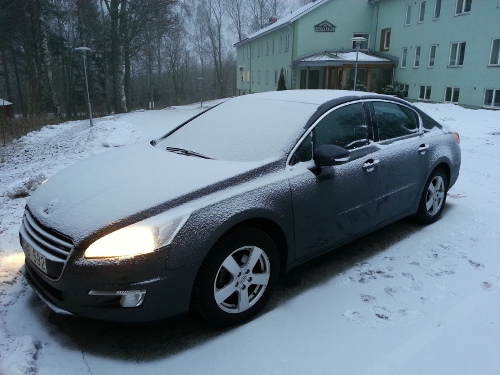 Not only was it a French car, it was a diesel hybrid French car. When I first got into biodiesel I thought a diesel hybrid would be a great idea. When diesel cars idle they don’t use much fuel, so a hybrid wouldn’t need to always turn off the engine in order to save fuel when the electric motor was running. But it was pointed out to me that diesel’s peak power is at low RPMs, just like with an electric motor, and it was questionable whether they would benefit each other. Considering the extra weight, cost and the production of rare earth metals that goes into an electric hybrid, it probably won’t be a great idea either for the car or for the environment.

The 508 was nicely equipped and comfortable, but it had the worst transmission of any car, bar none, that I have driven. I should have known something was up when the lady at the Avis counter asked “can you drive an automatic?”

Well, I thought I could. I have driven a Prius so I wasn’t thrown by the little shifter thingie that only had two directions, forward and back. When I finally got moving I thought something must be wrong, since every shift felt like the car momentarily stopped, throwing me toward the windshield and then slamming me back as it shot forward.

It had six speeds.

In all fairness, it did have a manual mode and paddle shifters, so maybe it was supposed to be driven like a manual car. Who knows.

Sweden was not at all what I expected. I have been to Norway a couple of times and I expected more of the same, sort of like one might expect Arizona and New Mexico to be two sides of the same coin. However, this part of Sweden was very flat. So flat that there were huge windmills (the make energy kind and not the Don Quixote kind) everywhere. It was kinda cool.

I arrived on a Saturday so the client had arranged for a group of us to attend a game of “Bandy” while I was in Sweden. When she sent me the URL, the website was in Swedish and I just assumed that it was hockey. Turns out I was wrong.

She managed to score tickets, on the ice, not only to Bandy but to the Bandy 2013 World Championship game between Russia and Sweden. 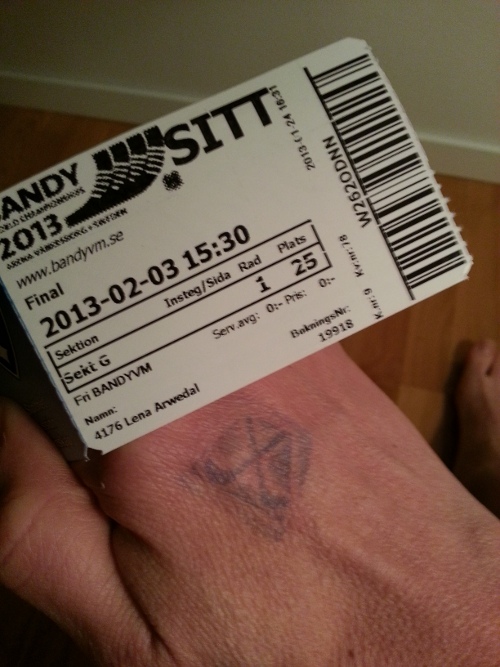 When we arrived, we entered the area and went to a “members only” type restaurant on the second floor that looked out over the ice. The place had a bar and a buffet, and we had a table right over one of the goals. It was packed, but we got four seats next to the window. 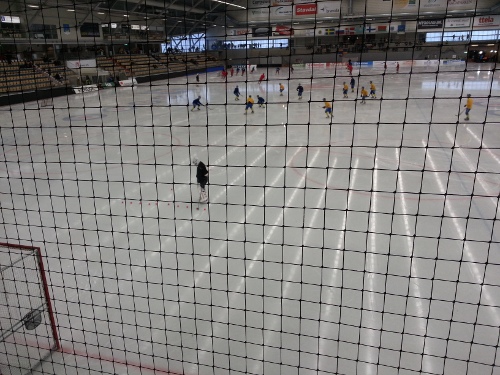 The first thing that made me think “this ain’t hockey” was the rink – it was huge. We’re talking soccer field huge, which is appropriate since I figured out later that Bandy seems to be more “soccer on ice” than hockey. While we ate, the teams came out to warm up and that’s when I noticed another major difference. Instead of a flat puck Bandy is played with a pink plastic ball. The ball is smaller than a baseball but bigger than a golf ball, and part of the game is to get it in the air.

The sticks are also different. They are much more curved, and the goals are much larger than in hockey. They are taller and wider, with a height about that of a man. The goalie, by the way, has two large, round padded gloves but no stick.

We finished eating before the game started. The place had filled up as we made our way to our seats in the front row near center ice. When the game started I tried to understand how it was played. This is where the soccer analogy came into play. There was no icing, no body checks, and no plastic wall protecting the fans from the ball (although that really didn’t matter). It was a physical game nonetheless, and fast. Like soccer, it consisted of two 45 minute halves and the clock never stopped – they simply added time as needed for penalties and other issues.

They did have penalties and a penalty box like hockey, although the times were pretty severe. Of the four penalties I remember, one was for 5 minutes but the others were for 10 minutes each. When a team was playing light (a “power play” in hockey”), the penalty did not end when the other teamed scored.

Speaking of scoring, Russia pretty much dominated. Their first two points came after the Bandy equivalent of a corner kick: The Swedes would all line up in front of the goal while one Russian player passed in the ball from a corner. Then three or four Swedes would shoot out and try to break up the play before they could score.

They didn’t do so well on the first two.

At halftime it was 2-1 Russia, and in the second half Russia scored its first “real” (non-corner kick) goal to make it 3-1, but the Swedes managed to score again late in the game to make it 3-2. Unfortunately, Russia scored another corner kick thingie with only 10 or so minutes left, and even though Sweden scored again they couldn’t pull off the tie in time.

I say “10 minutes or so” since you couldn’t really tell when the game was going to end. Just before the 45 minute mark in the second half, a referee took a huge fall and wasn’t getting up. I didn’t see him get hit (that did happen a couple of times throughout the game) but he must of hit the ice hard because as they helped him off the ice you could tell that his legs weren’t quite working (not that they were broken but that it was having trouble keeping them under him). We ended up waiting about ten minutes for them to find a replacement and get him suited up, which I thought was a little weird for such an important game. Most soccer games have a alternate referee dressed and ready to go, and since this game is much faster than soccer I would assume refs get hurt more frequently in Bandy.

I really enjoyed myself. While the Russians would cheer “Ruuus-See-Ah Ruuus-See-Ah” the Swedes would shout something like “Ya Ya Men-sah, Fah Tosh Bor-ah” and I struggled to learn it. I was sad to see the Swedes lose. 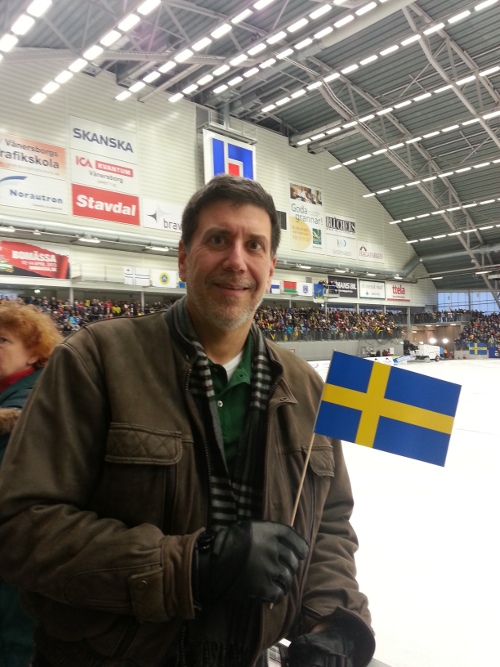 Anyway, I’ve chalked this one up under my “weird international sports” along with Australian Rules Football and perhaps I can see another game some other time, as I look forward to going back.