I travel a lot by air, and while I can tell you almost immediately what type of plane I am in from the inside, I have trouble identifying most planes from the outside. There are some notable exceptions like the Concorde or the Boeing 747 (my favorite plane) and quite often my confusion is due to a poor sense of scale: unless I see a Boeing 737 parked next to a Boeing 767 I can have trouble telling them apart.

I brought this up with Alex Hoogerhuis when we met up in London, and he graciously spent about an hour explaining key points to look for when trying to identify a plane. The following is what I remember of that conversation. Anything I get right is due to Alex and anything wrong is totally my fault. If I use words like “tail” to mean both the rear of the plane and the bit that sticks up in back, don’t take it personally.

Finally, I stole all of the pictures. If you click on one it will take you to the site where I found it. My thanks to the creators (and just let me know if you’d rather I didn’t use it if you own it). 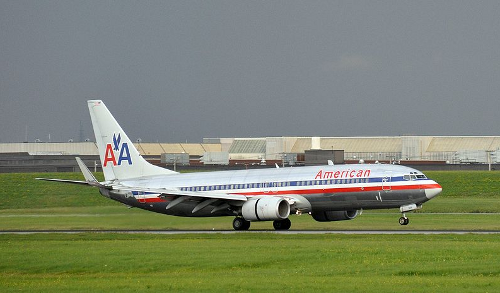 Probably the most common narrow-body commercial jetliner in use today, if you have flown at all (at least in the US) you have likely flown in a 737. For example, the entire Southwest fleet is made up of 737 aircraft. It is called a “narrow body” jet because it seats a maximum of six people in a row, but I like to differentiate narrow body from wide body by the number of aisles: narrow body planes just have the one (note that all my notes about aisles and seats refer to the main cabin).

Being so common, I am often thrown by the many differences between the models. When I used to fly Southwest, I liked the model where the first exit row was missing a seat. I would aim for the window seat in the second exit row so I could stretch out my legs where the missing seat would be, but most models have a full set of six seats in each exit row. So how can I tell a 737 without peaking inside?

Alex told me to look at the tail. Almost all commercial jets have a tail that rises at an angle off of the top of the fuselage. The 737 is different: there is a small triangle in front of the main tail, so there is almost a little “fin” in front of the tail proper. Apparently no other aircraft (or at least common, commercial aircraft) do this, and it does make it easy to spot one in the wild, no matter the model (Note: when I wrote this I didn’t have Internet access and it looks like some very early models didn’t have the little fin bit, but all modern ones do seem to have it)

I am putting this plane next because I fly American Airlines and, unless I am going to Miami, I will be in a McDonnell-Douglas 80 (or Super 80 [S80] as American calls them) if I am staying within the US. I have spent several months of my life inside these things, so I am a bit nostalgic about them. That, and the fact that this was the first jet that Wilbur and Orville Wright flew just adds to the historic nature of the flight.

Okay, yes, these bad boys are old, so old that I swear one I flew in was powered by coal, but they have safely gotten me out and back many times. They are narrower than a 737 and the main cabin setup is two seats on the left and three on the right (still with the single aisle). 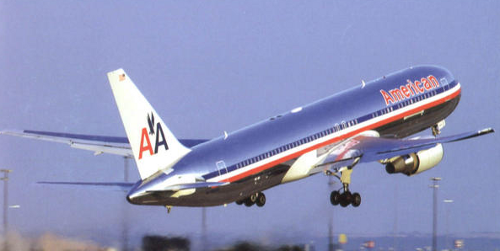 If I am not in any of the above two planes, I am flying from Raleigh/Durham (RDU) to Heathrow, London (LHR), on a Boeing 767 (or Dalles/Ft. Worth [DFW] to Frankfurt [FRA] on a 767). This is a wide body jet with a seat arrangement of 2-3-2: two seats near the windows and two aisles with three seats between them. It has the same general proportions as a 737 so I often have trouble telling them apart at a distance. However, the 767 lacks the little lead in fin of the 737 tail and the fuselage comes to a point at the end that is a perfect cone. Thus, if you are looking at a big plane and the tail ends in a cone, you’re probably looking at a 767.

Every so often I end up in a 757. This is a plane about the length of a 767 but it is a narrow body aircraft with a similar seating arrangement to a 737 (3-3 with single aisle in the main cabin). I asked Alex how to tell the difference between it and a 767 since they are roughly the same length, and he pointed out that the cockpit windows on a 757 are lower than the windows in the main cabin. Also, he said to imagine a person standing on top of the line of windows along the side (he didn’t say this was a possible place to stand, just to imagine it). If a person could fit between the top of the plane and the top of those windows, you were looking at a wide body jet. If not, narrow body (since windows are pretty much the same size on any commercial jet except for the 787 Dreamliner which are larger). 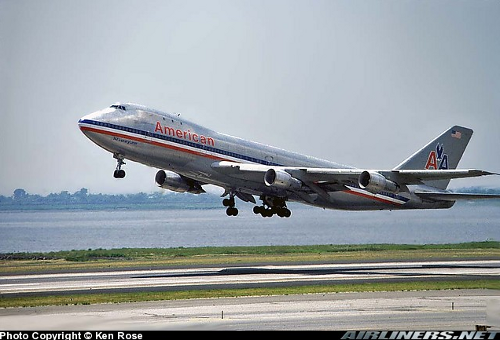 This is my favorite plane of all time. I think it is beautiful and I love flying in it. Well, I love flying in it as long as I am not in the main cabin, which is has a whopping 3-5-3 seat configuration that makes each row hold almost twice as many people as in a 737. If I have to sit in the back I aim to be way back. When the fuselage starts to taper in the back, they can’t fit as many seats in, so the “window” seats after extra space between them and the actual window. After takeoff you can move all of your crap over there for easy access while having okay legroom.

But my favorite place to sit is in the upper deck in business class with lay-flat seats. It’s like having your own private little room, complete with separate galley and lavatory. With it’s truncated upper deck, huge size and four engines (all planes discussed up until now are two engine craft) it is easy to spot. It is still the best thing to fly over the ocean in my opinion, with the possible exception of first class in … 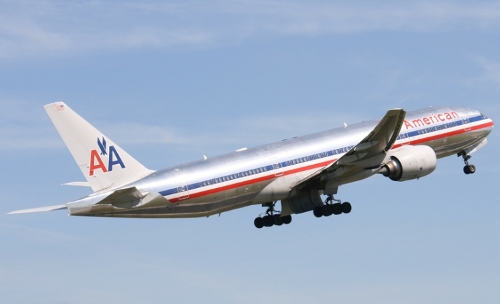 The “triple seven” was aimed to be a replacement for the aging 747. American used to fly one on the RDU to LHR route and I loved the modern seats and in-seat entertainment, even in coach. But I got to fly in First Class in one once from Chicago to Narita and it was awesome. You get your own little pod-thingie that can turn into a completely flat bed and even sports a guest chair if you want to sit and talk with someone across a table. I used points to get my wife and I on this flight, and even though we were next to each other in the middle section (the seating in first is 1-2-1, versus 2-5-2 in the main cabin) the “pods” were so wide we’d have to stretch to touch hands.

But how do you tell this big plane from other big planes? Look at the tail end of the aircraft. While the 757 and the 767 have cones, the 777 has a long, flat vertical paddle – almost as if it were a fish that lost its tail fin. Plus, its two engines are freakin’ huge. 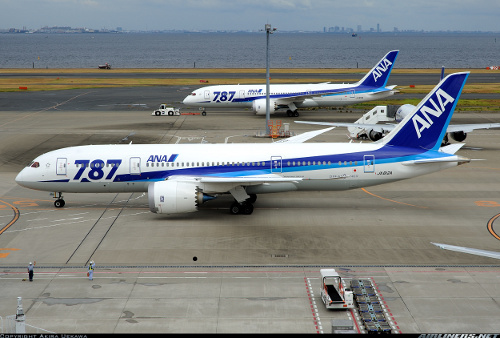 I have yet to fly on this plane, and with the current de-bugging going on it may be a while before I do. This is a great example where the higher number does not mean a bigger plane (the 737 is bigger than the older 727, but while the 757 is smaller than the 767, both are smaller than the 747). It was built to be extremely fuel efficient, very quiet and with a long range. With exceptions for things like luggage, it costs about as much to fly a plane half full as it does full, so airlines want full flights (and they are succeeding, if my recent travel is any indication) hence smaller planes, and more fuel efficiency translates directly to the bottom line.

I have seen it, however, in FRA. It looks small but it is slightly larger than the 767 but smaller than the 777, and it has larger than normal windows. I won’t worry about looking for other clues until they get more prevalent.

Okay, that about covers the Boeing line up (there is a 717 that I flew intra-island in Hawaii) but there is that *other* plane manufacturer over in Yurrip known as Airbus. 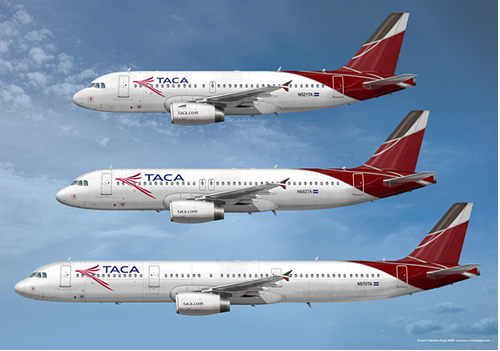 Since air flight distances intra-Europe tend to be shorter than in the US, Airbus has three planes that are used to serve most of that traffic, the A319, A320 and A321. Alex showed me this neat little picture where you can see that the main difference is length. 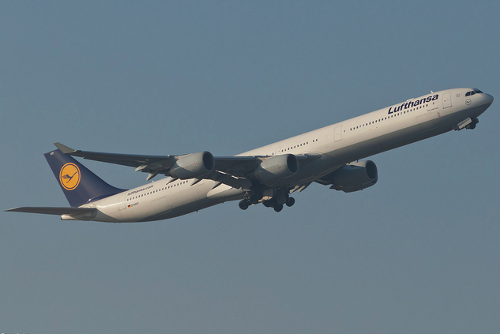 This is a cool plane. It is a wide body jet with four engines, but they look tiny, almost cute. If I see a plane with four wing mounted engines that isn’t a 747, I just assume it is an A340. I have flown on these a couple of times, but it is rare. Once was on a British Airways flight in business class, and the business class seats are arranged head to tail (i.e. the seats near the window face backward so that your shoulders are near the feet of the guy next to you, although a partition keeps that from being awkward). Besides being the safest way to sit in case of a crash, it is almost like having a little room if you are next to the window and the partition is up, and it is my favorite way to fly outside of first class on a 747 or a 777. 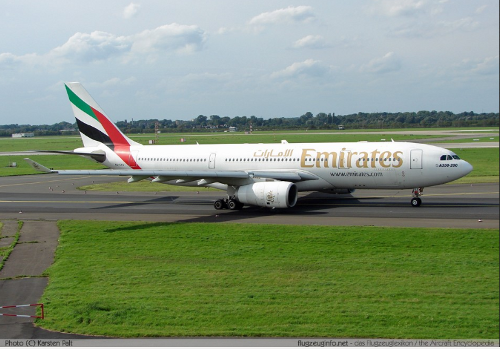 This is where my memory fails. This plane is smaller than the A340 but bigger than the first three I mentioned. Perhaps Alex will chime in and update this for me. 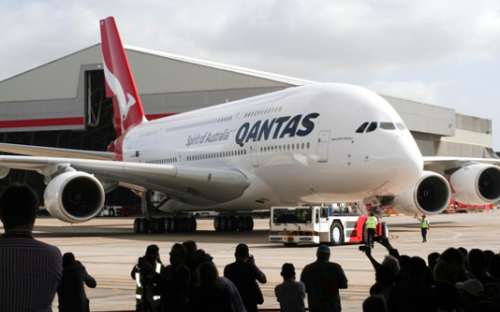 This bad boy is hard to miss. Two rows that run the complete length of the plane, this is a monster, capable of holding 853 people in one flight. As a long haul plane with lots of capacity, I first saw them in Emirates livery at LHR, although there is one that flies into San Francisco for Lufthansa every day. I have yet to fly on one but with a new Australia to DFW route that skips LAX, I’ll be sure to try it the next time I have to head down under.

There are other planes out there. I’m old enough to remember the DC-10, with its three engines including the dodgy one in the upright stabilizer. I see one at RDU flying for FedEx, but I’m told that’s a DC-11. There’s the L1011 (another plane I’m old enough to have flown in) which has an engine mounted on the top of the fuselage in the rear but it exhausts out the tail of the plane. And I did my time on 727s as well as a slew of smaller aircraft.

By using Alex’s cheat notes, the last time I was taxied around LHR I was able to feel confident about my identification of the planes (including the pair of A380s side by side at the Qantas terminal – yowsa). I saw a slew of 747s and 777, plus a large number of A340s and other craft, including what I assume is a retired Concorde parked off to one side. I did see a strange one though – a passenger jet with four small engines but the wing was mounted high – I want to say it was above the cabin windows.

But then again, maybe not. Alex would know.