I spent last week in San Diego. I like San Diego and I like the client so I expected to have a good time. While that part came true, I also expected nice weather. While it was beautiful for the first half of the week, the second consisted of rain and an earthquake.

What I didn’t expect was to be exposed to new tech, specifically tech-enabled changes to established business models. I already talked about Stacked, so now I want to mention Uber.

Since LISA was in town I was able to meet up with some friends from Chicago. We ended up at a restaurant called Craft & Commerence (good food, great mac ‘n cheese, excellent cocktails). As we were leaving to head back to our respective hotels, I was asked if I had ever heard of “Uber”.

Uber is a system for hiring a “livery service,” or as they say in the biz, a “black car,” to drive you around. While more expensive than a taxi on average, they tend to be nicer and driven by a more skilled driver (again, on average, I’ve ridden in some clean regular cabs with very talented people at the wheel).

You access Uber from your phone, and after you confirm your pick up location it will tell you how long it will take the closest available driver to get to you. If you choose to be picked up, it will associate your request with a driver and you’ll get both the driver’s name and the option to call them. When you set up your Uber account, you configure a credit card and everything else is cashless. 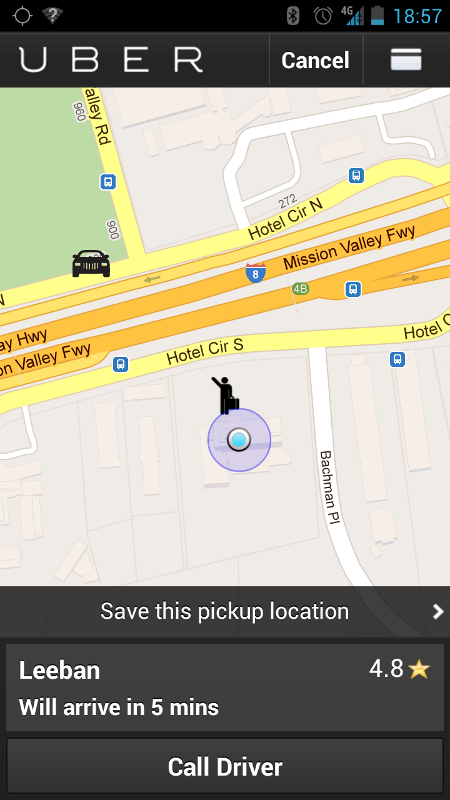 While I didn’t use it that night, I decided to try it out on Friday when we headed down to the Gaslight district to eat at Seersucker (too “hip” of a place for me, the food and drink were too good for most of the clientele to appreciate). The downside was that it had been raining, and this is so unusual in San Diego that it was causing a lot of traffic problems. Because of that and the fact that it was Friday night, I was informed that “surge” pricing was in effect and I would be charged twice the normal rate.

Still, I wanted to try it out, and since I had received a $10 credit when I signed up, I went ahead and called for a car. I was immediately told that my driver was Leeban and that he would be there in 10 minutes.

I went downstairs to wait, and I could track Leeban’s progress on a map in the app. When he got close the map updated to show his picture (a nice security touch) and I received several text messages throughout the process, including one when he arrived.

The car was nice and clean, although not new. Lincoln no longer manufactures Town Cars and so the livery industry is having to make due with old stock. Leeban was very friendly and knowledgable – while my Google Map app suggested taking 163, he said it was a total mess because of the rain and he took me a different way. After a few congested stoplights, it was a straight shot into downtown and I arrived ten minutes earlier than I thought I would.

I asked him about Uber, and he loved it. Many people don’t realize that when you pay a normal taxi driver with a credit card, not only does the taxi service take a large amount of that out for “processing,” (in addition to their share of the fare itself) it can take months for the driver to actually get paid (I always try to pay for cabs with cash). Uber takes a flat 20% fee for setting up the ride and while he didn’t tell me the details, he seemed happy with the speed of payment. But he mainly liked Uber because the clientele tended to be nicer and safer overall, and he never had to worry about getting stiffed on a fare.

When we arrived I asked him if there was anything else I needed to do, specifically did I need to add a tip, and he said no, it was all taken care of. Within five minutes I received a text with the total fare and an e-mail with a detailed receipt. 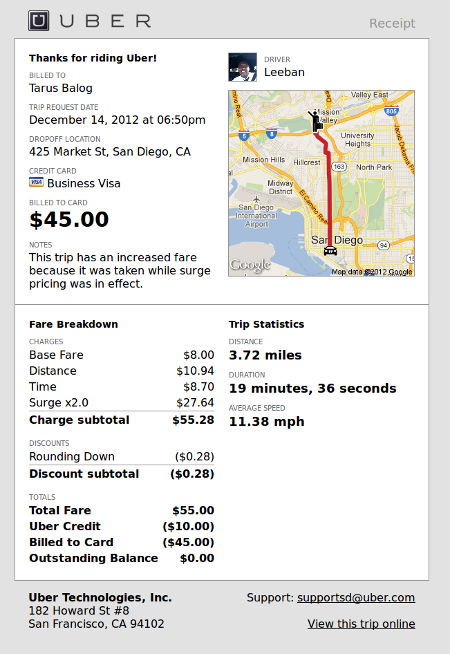 While most car services charge a flat rate, this is more along the lines of a taxi, with charges for time spent waiting as well as distance. I thought the fares were very reasonable with the exception of the “2x” surcharge and figured I’d use Uber again to get to the airport in the morning, but only if it wasn’t “surge” pricing. 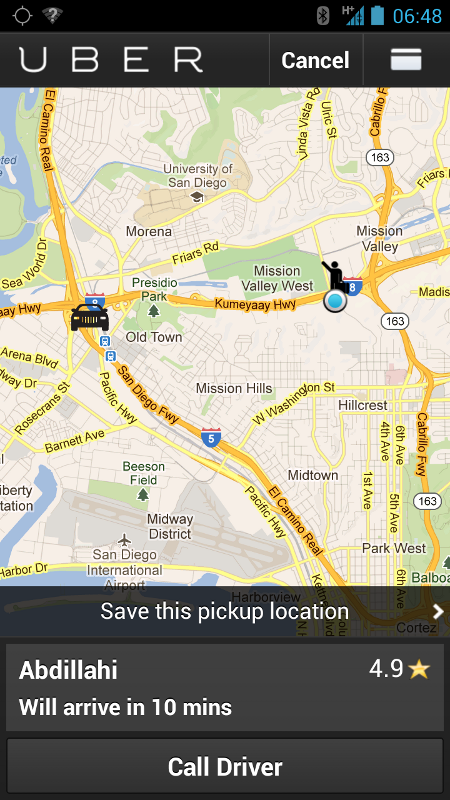 My second Uber ride was similar to the first. I was paired with Abdillahi (both drivers were originally from Ethiopia but had lived in the US for decades). Unlike Friday night, there weren’t too many options, and I had to wait for him to come from the airport in order to take me back. This took about 15 minutes, which is somethiing that I didn’t plan on happening, but I still made it to the airport in plenty of time. Leeban was able to arrive in around 5 minutes (quicker than the initial estimate), so I need to remember to order ahead during off-peak hours.

Abdillahi had a slightly nicer Town Car and was just as professional as Leeban. The fare was $30, which is what I paid for a cab to get to the hotel when I arrived. He also was very happy to be a part of Uber.

I plan to use this service again, especially if I happen to be in one of their foreign locations (it looks like they operate in Amsterdam, London, Paris, Sydney as well as a couple of cities in Canada). Since I plan to be in London for the OpenNMS training at Red Hat, I’ll have to try them out there.