I’m in San Diego this week, and the client took me to Stacked for lunch yesterday.

The Stacked “dining experience” starts off pretty normal: you are greeted by a hostess who takes you to your table and hands you a menu. But it changes a bit from there, because on every table there is an iPad running a custom ordering app. When you sit down, you scan in a credit card and then you can start the ordering process.

Once you have decided on what you want to drink, you navigate through the app and then add it to your order. When everyone at the table has chosen, you hit “send to kitchen”. A few minutes later the drinks arrive.

In the meantime, you can start on your food order. It follows the same process, with the added feature that you can customize nearly everything on the menu. Again, once everyone is finished, you hit “send to kitchen”. 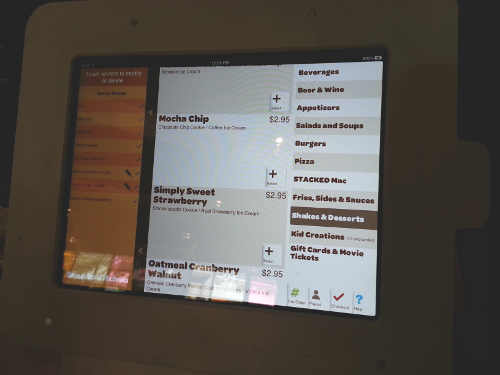 We did have a waitress, but she was mainly there to make sure we understood the system. As there were no prices on the printed menu, I wondered if they changed on the tablet, and if so how frequently. It also raises a question about the amount to tip. Since a good portion of the job of a waiter is to get your order correct and in a timely manner, should you tip less?

It was an interesting dining experience. As a frequent business traveler and no stranger to “table for one,” some of the most frustrating aspects of dining out involve the ordering process. For example, on Sunday I went out for sushi, and after getting a seat at the bar and being left with one of those “check the box” papers, I was pretty much ignored for 20 minutes. I wasn’t given anything to write with, and since all I wanted was the regular sashimi tray there really wasn’t much to do. I finally caught the eye of the sushi chef and got my ordered started.

I like nothing more than having a long dinner with friends, but when I’m alone, eating is more of a chore and I just want it done as efficiently as possible.

Which was a big plus for Stacked. While the Greek Salad I had was nothing special, it was good and when I was ready for dessert I was able to order my ice cream sandwich when I wanted, and I didn’t have to catch the eye of the waitress, etc. I’m not ready to replace my favorite wait staff with a tablet, but for certain dining situations it makes a lot of sense.

What didn’t make a lot of sense was the fact that they used iPads instead of Android tablets. The case covered up the home button to prevent people from exiting the app, but you could still see some of the default border (with the signal strength indicator, etc.) An Android tablet could have been used to create a truly dedicated device.

The final thing that bothered me was that their case, which was probably custom, featured the all too common “cut out” so you could see the Apple logo. 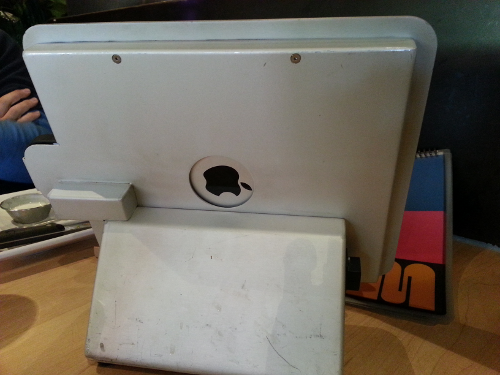 I believe this is Apple’s greatest weakness. They used to compete on innovation, but now their products have become both status symbols and fashion statements. The problem with fashions is that they tend to change, and change quickly. Once everyone has an Apple device, those that drive the fashionable adoption will switch to something else and the herd will follow. It won’t be cool anymore. And when it comes to innovation, I find my Android phone much more innovative than my old iPhone 4.

Anyway, I’ve seen iPads being used to take orders at restaurants before, but this was the first time I’d seen a tablet of any sort being used by the consumer in a retail transaction. Any other notable cases out there?

3 thoughts on “Stacked and iPads”