I am in Minnesota this week attending the seventh annual OpenNMS Developers Conference. With the exception of one year, we’ve been having them annually since 2005 when five people (outside of opennms.com) flew to Pittsboro crash at my house and to spend the week hacking on OpenNMS. This year we have 26 people from seven countries descending once again on Yudof Hall at the University of Minnesota for a week of community, coding and just having a good time. What’s even cooler is that four of those original five guys are still here.

This is one of my favorite times of the year. While I work almost every day with someone who is not local to me, this event brings us all together so we can work face to face. It’s an amazingly fun week.

I was trying to label what the Dev-Jam experience is like and I came up with things like “enjoying being a geek” or “engaging in free culture” but the best phrase I could come up with was “celebrating abundance” (especially when it comes to food at Dev-Jam). 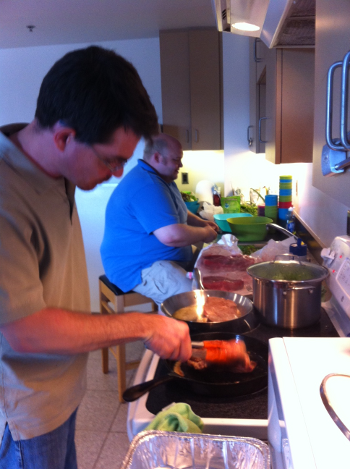 I was once taught that the definition of “economics” what the study of how limited resources are applied toward unlimited desires. This makes sense in terms of food, water, cars, gold, etc., but it seems to break down when it comes to digital products, such as music, video and software. While good software is definitely scarce, once it is created the cost to produce more of it is close to zero.

Since creating software is both a iterative and evolutionary process, it seems to follow that the more software that is available to developers, the faster it can be produced. Think of it like bittorrent – the more people share the faster it happens.

And since I brought up bittorrent, I have been following with great interest the recent debate concerning digital music, sparked by a post by a 21 year-old woman on NPR’s “All Things Considered” blog. In much the same way that fauxpen source companies try to redefine “open source” to mean anything from the “freemium” to the “open core” model, media producers (music, video, books) are struggling to figure out how to deal with the fact that their traditional way of generating revenue is being threatened. It seems similar to what the horse carriage industry felt with the arrival of the automobile, or the telegraph industry when the telephone came along. You can fight it for awhile, but eventually you’ll lose.

(Note: I want to point out that I am extremely happy to see Simon Phipps appointed as the president of the OSI as I believe he will do a lot to fix this misappropriation of the term “open source”).

I love it when content creators, instead of trying to preserve the status quo through legal threats or legislation, actually embrace change for their benefit. This digital revolution creates an environment where the people who create the content can be the ones who directly profit from it. People like Louis C.K. and Jonathan Coulton seem to “get it” and their lives (and pocketbooks) are enriched accordingly.

Which brings me back to abundance. The traditional model would say that you can’t get qualified programmers to write code unless you pay them lots of money. I am currently surrounded by a number of amazing coders who are working on OpenNMS for free. The traditional model says that you can’t make something that appeals to a limited number of people, but numerous Kickstarter projects have shown that to be wrong and that there is a lot of money out there, but traditional markets haven’t been able to efficiently tap into it.

We are living in a time of abundance for those who are willing to look for it. I feel extremely blessed that OpenNMS has both survived all of these years and prospered, and I am exciting to see what the future brings.