I’ve spent this week in Chicago. I love Chicago. I think if I didn’t love living out in the middle of nowhere in North Carolina I’d seriously consider moving here.

It also helps that we seem to have a cluster of OpenNMS customers in the area, mostly in finance. The trip this week was to work for the Chicago Board Options Exchange. 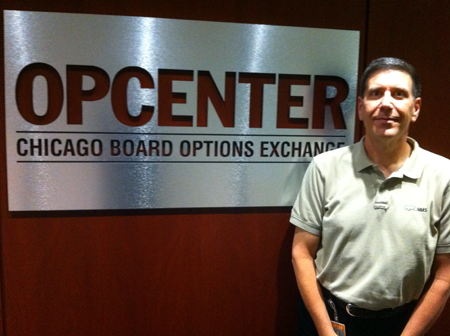 One of the schools I got kicked out of was Harvey Mudd College. A friend of mine from those years was a math major, and after graduation he went to work for a private equity firm as an options trader. It was fascinating to me, and once I spent an hour and a half just staring at the action on the floor of the Pacific Exchange. All the traders wear special jackets identifying who they work for, and all those colors moving around was quite mesmerizing.

But that was over 20 years ago, and options trading has changed a lot since then. The physical trading floor has shrunk and about 95% of trades are completed electronically. The CBOE is the largest options exchange in the US by volume, so you can imagine that information technology plays a key role.

I came up here as part of a Greenlight project to replace a Netview installation, and so far I’ve had a blast. The CBOE team are sharp guys. They had managed to do quite a bit with OpenNMS before bringing me up, and I’ve gotten to focus on cool integration stuff. After several installs, I think I finally have a handle on the black magic that is LDAP authentication, and we did some notification work to create pop-ups on operator screens as well as an integration with BMC Event and Impact Management (BEM).

But despite the fact that Chicago is pretty pleasant in July, I’m looking forward to heading home. I’ve been on the road a lot lately, and it doesn’t show signs of letting up anytime soon. After a week on the farm I’m off to Portland for OSCON. Hope to see some of you there.