This was an incredibly long and busy day.

In a normal week I think about OpenNMS a lot, but during Dev-Jam there is so much energy that I think about it more (if that is possible) and it makes it hard to sleep. I stayed up late the night before working on the new opennms.org website and I woke up around 5am and couldn’t get back to sleep for all of the new ideas swimming around my head.

So I got up, did a bunch of .com work (including payroll – it’s that time of the month once again) and wrote what may be my last post on open core (probably not, but we can always hope). I then went downstairs to join the rest of the team.

It was distracting. Mike Huot brought in his smoker and was cooking what would become our dinner and it smelled amazing. They had to start on it the night before and, to jump ahead, the results were delicious. 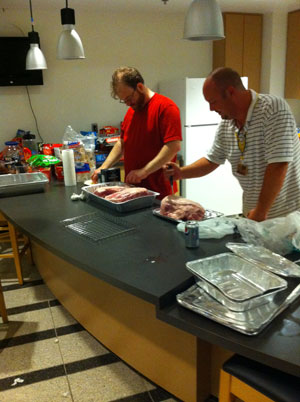 There was a lot of work going on, and on a whim Bill decided to discover the network we were using. Here is a screenshot of the unfiltered nodes: 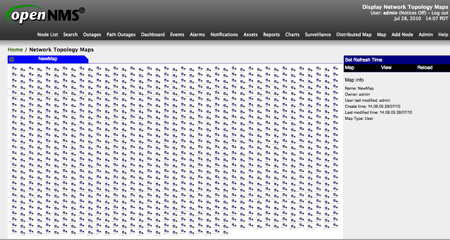 I worked with Alex on RT for most of the day, and managed to take a short nap just before Ethan Galstad and Mary Starr showed up.

Ethan has been a visitor to Dev-Jam before (he lives nearby) and Mary is his business partner at Nagios Enterprises. Nagios Enterprises is Ethan’s commercial software company that builds on the open source Nagios platform to deliver an extended and supported commercial version. That differs greatly from the OpenNMS business model, so we had a lively debate about it.

First, even though Nagios is open source, Nagios XI is presented as commercial software. Just like my Hyperic example yesterday, go to nagios.com and search on “open source”. No matches. Ethan is 100% transparent about the commercial nature of his product. Nagios XI is not open core.

Second, I have often said that I see software taking two paths: either becoming a commodity or becoming open source. Ethan has structured his business around commoditizing the Nagios platform and it is priced accordingly.

Finally, people have been building proprietary software add-ons on top of Nagios for nearly a decade, and Ethan quite simply wants a part of it. As the main person responsible for the project, he has built a brand of considerable value. Just now a Google search on “Nagios” returns “About 9,470,000 results” (OpenNMS is only around 123K hits). That’s an impressive number.

It does illustrate a difference between the communities around Nagios and OpenNMS. From the moment I took over the administration of the project, I have relied heavily on the community to keep it going and make up for my considerable shortcomings. In contrast, Ethan has been the primary author of most of the Nagios core code.

He asked me point blank why we didn’t produce a commercial version of OpenNMS. I pointed out that our market was squarely aimed at “open source network management” and that we didn’t have any expertise in selling commercial software, but the truth of the matter is that I don’t feel the same ownership over OpenNMS that Ethan has toward Nagios. While The OpenNMS Group does hold 100% of the copyright, it would just seem wrong to me to build on that work and not give it back to the community, in any fashion. 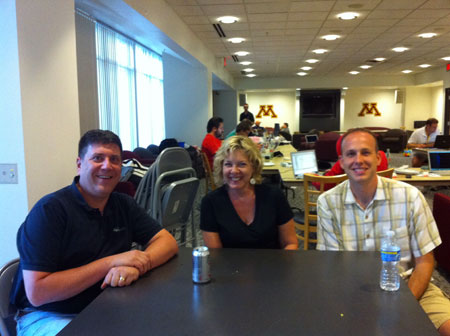 If you have never met Ethan, please understand that he is one of the nicest guys I’ve met in this business, and his business partner Mary seems very competent and brings a strong business background to the company. Note that what I have written here our my thoughts on our conversation and Ethan may have a different take on some or all of them.

So we stuffed ourselves with barbecue and talked business for several hours, then Ethan and Mary left and many of the rest of the gang went off to an outdoor showing of Sherlock Holmes.

It had been a long day. I went to bed.