I was wanting to take a break from Dev-Jam to put down some thoughts I’ve been having during this recent renaissance of the “open core” debate when I realized something:

At least as a business model. While I don’t expect it to go away overnight, I do expect to see very few new companies using the model and those commercial software companies that tout themselves as open source reframing their marketing to de-emphasize it.

I base this on observations of my own market. Even though searching on “open source network management” in Google returns OpenNMS as the first hit, for years the industry press omitted us from articles on open source management to focus on three VC-backed firms: Groundwork Open Source, Hyperic and Zenoss. All of these companies are what I would classify as “open core” and it is interesting to see where they are now.

This was one of the first open core companies to try and commercialize open source projects. When it started in 2004, GWOS sold commercial software “wrappers” around a number of open source projects without releasing any open source code on their own. In 2006 they started to distribute the “Groundwork Monitor Community Edition“. After four rounds of funding, they have raised $29 million (A: $3MM, B: $8.5MM, C: $12.5MM, D: $5MM) but they still come across as a company looking for a business plan. Once known for selling software licenses in excess of six figures, they now sell a “quickstart” version for $59.

Since I am pretty much known for running my mouth, people tend to contact me with their experiences with companies in this space. I received one such e-mail a few weeks ago:

Hey, I was just told that GWOS is no longer putting out a community (free) edition. I was told this by one of their support guys, was told that was the reason why they are now releasing version 6.2 while the 6.0 CE version hasn’t been updated since December. He said they were just going to quietly “let it go to the community” … Also interesting is that the $59 “quickstart” is just that, not really meant to be production, no upgrades or updates come with that, and no guarantee that you can even purchase the upgrades later

I thought this was interesting, so I did some poking around. I found an entry on their forums (which doesn’t seem to be policed for spam anymore):

Interesting, seems like all traces of the free/community version are gone from their site. Still available on sourceforge, I’d grab the latest version while it’s still there.

Not one to just publish hearsay, I sent a note to Tara Spalding, their Chief Marketing Officer, asking if the rumors of GWOS dropping support for their community edition was true, and she replied:

Thanks for reaching out. That is untrue, and the rumor mill is pretty lame.

I was reminded of this exchange this week when I saw a GWOS ad in the Wall Street Journal (click to embiggen): 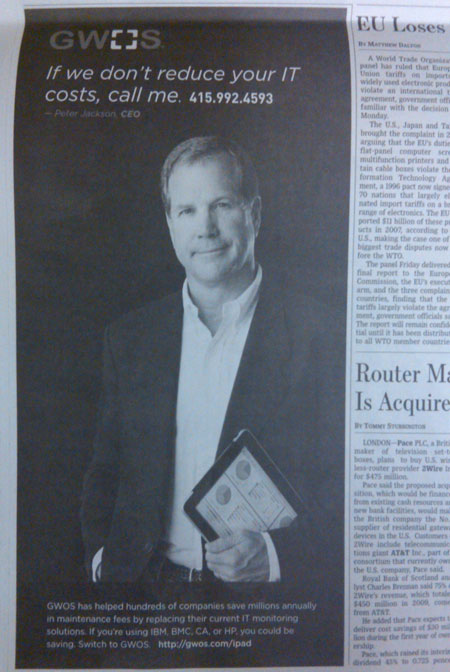 It was about 1/6th of a page, which runs around US$40K, so it must have been important to them. Note that the term “open source” does not appear at all in the ad.

So it seems, at least on the surface, that GWOS is trying to distance itself from the term “open source”. It will be interesting to see how they deal with their name. Perhaps after all that money and all that time they will find success marketing themselves as a commercial company.

Another open core firm that used to be referenced a lot was Hyperic. I would often use them as an example of the problems with the “feature wall” inherent in open core solutions. The difference between Hyperic and the other VC-backed companies is in the quality of the VCs. Benchmark and Accel seem to know what they are doing. Hyperic was rolled into SpringSource just before the latter company was sold to VMWare. Thus the VCs got an exit and I assume the five founders of Hyperic did okay financially.

What’s funny is that, although Hyperic products are owned and sold by a very commercial software company now, the interest we receive on the OpenNMS and Hyperic integration has actually gone up. It seems that framing the Hyperic products in the context of commercial software has actually made the buying decision easier, and the term “open source” does not appear anywhere on their home page.

Zenoss has a very popular “core” product that they publish under an open source license, coupled with a variety of “enterprise” software offerings that they price per device per year. Their enterprise “silver” package is listed at $100/managed resource. Note that this is the subscription price – that is $100/resource/year. So if we take an average OpenNMS install of 2000 devices, that would run $200,000 a year, or $1,000,000 over five years.

It is really hard to argue that a Zenoss enterprise solution is any less expensive than, say, a solution using HP OpenView. In addition, most software from HP and IBM is licensed in perpetuity: i.e. once you’ve bought it you get the right to use that version forever. It would be hard for an enterprise of any size to base its management solution on something that must be renewed year after year, with no guarantee that the price will remain the same.

Now, this is a post proclaiming that open core is dead, so I’m not here to pick on the way Zenoss prices their software. What I want to examine is the usefulness of their business model. As a VC-backed firm that has raised around $25 million, I assume the desired exit would be an acquisition. But how would one evaluate them? A number of past Zenoss commercial clients have talked to us as an option to Zenoss, simply because their revenue structure is not sustainable. In addition, as part of the OpenNMS project we are targeting those enterprise features users of Zenoss find most valuable, and we plan to offer them for free. Heck, $200,000 can go a long way toward funding a lot of custom development, so a Zenoss user could spend that money once and get what they need under a truly free and open source license. Thus the value of the Zenoss commercial software has a very short shelf life, and since they have no revenue model based on their open source software, so does the value of the company.

I think investors are wising up to this. In their latest funding round the target was $5.2MM but they only raised $4.83MM. Thus it would appear that at least one of the investors pulled out of the deal at the last minute. That was a smart move.

[Note: our goal at OpenNMS is to produce the de facto network management platform, so I’m not targeting Zenoss specifically but all commercial software vendors in this space. Our free software will continue to erode the value of their commercial software. This is also not meant to be taken as an attack on anyone who uses any of the products listed here – if it works for you, great. This is more an examination of the business of open source.]

With the backlash hitting SugarCRM and NASA spurning Eucalyptus in favor of OpenStack, it seems that the market is wising up to open core and demanding more from companies that call themselves open source. With examples like Hyperic above, it seems to be in a commercial software company’s best interest to avoid referring to their offerings as open source. It looks like Groundwork is moving down that path and Hyperic is already there.

One thought on “Open Core is Dead”