We hit a snafu this week that kind of brings into sharp focus what Tim O’Reilly was talking about at the Open Source Business Conference last week.

We are toward the end of a project for Papa Johns Pizza where we will be using OpenNMS to monitor all of their stores. This will require our remote monitor to be placed in 2500+ locations, and they wanted a way to display the status of those monitors on a map.

Without spending too much time thinking about it, we just grabbed the Google Maps API and ran with it. 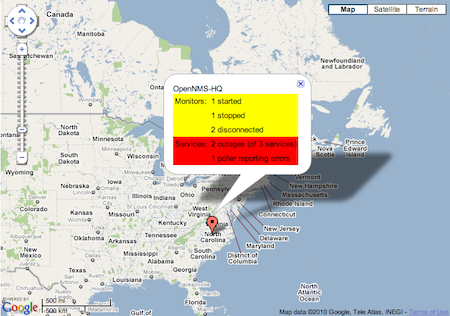 Unfortunately, we didn’t realize that using the Google Maps API has an associated cost. It’s based on page views and can get very expensive. Part of it has to do with the fact that Google likes to make money (of course) but I was also told that there are licensing issues involved as well. No key is required if the server is publicly accessible, but that tends not to be the case for OpenNMS servers.

In Tim’s talk he demonstrated that while the struggle used to be over closed vs. open applications, with the advent of companies like Google creating huge, closed databases, the new struggle will be closed vs. open data. It was just funny to run smack up against that less than a week later.

Papa Johns uses MapQuest for their web site and they have a license, so in the near term we’ll simply add MapQuest as an option along with Google Maps. I want to be able to offer a free version as well.

There are some free alternatives, such as OpenStreetMap. As we have always viewed OpenNMS as a network management application platform, we want to offer as much choice as possible. We’re looking at using Mapstraction to enable support for multiple map backends (including Google Maps and MapQuest) and hope to have that done for version 1.8.