My second day at the OSBC started off pretty hectic. I had a number of work related things to take care of so I missed the morning keynotes. Both of them seemed interesting, but it wasn’t meant to be (on the upside we closed a lot of business today).

I showed up in time for the first set of breakout sessions, and the first one I attended was entitled “Tactics and Metrics for Scaling an Open-Source Company” by Rob Bearden of Benchmark Capital. Now this was what I was expecting from this conference: defining open source business as open core. Having an “enterprise” commercial software version of your open source project was taken as a given. I thought it was a telling sign when the speaker kept introducing people from the VC-backed open core world (one guy from MySQL, another from Alfresco, a couple from Pentaho) but he had to ask Jono Bacon to identify himself.

VC firms are usually not concerned with building lasting companies but instead they focus on building perceived value so that they can exit in five years or less. This talk was much more about downloads and marketing than scaling to meet customer demand. I don’t really have a problem with the VC business model, but it causes my knickers to bunch when they drape the “open source” flag on it. Let’s be honest – the sale of MySQL to Sun did a lot for the investors of MySQL, but was it really worth US$1 billion for the buyer? If the focus hadn’t been so much on the big exit, would the MySQL community be better off and less fractured? That sale is a great thing to tout if you’re making investments, but don’t lecture me on value as a whole.

Of course it didn’t help that the whole discussion was peppered with buzzwords like “e-properties” and “onboarding”. And it consisted of Powerpoint bullets.

I did introduce myself to James Dixon of Pentaho. I like reading his stuff even if I don’t agree with most of it.

I decided to follow Jono over to his presentation on the role of the Community Manager. As the most well-known community manager in all of open source, his presentation was both interesting and insightful. It wasn’t a discussion of how to build a community (for that get his book) but instead focused on the qualities to look for in the person you want to act as the liaison between your company and your community.

One phrase he used that I liked a lot is that your community manager has to be able to “participate faithfully”. I think it is dreadfully important that the community manager of any project should have some sort of credibility with the community. In addition, he stressed the manager’s “ability to do” – meaning that the position can’t just be a figurehead but has to be vested with influence. Awhile ago I overheard one community manager respond to a technical question about his product with “I’m just the guy who orders the T-shirts”. I think he was selling himself short but that is a horrible thing to have to say.

He also introduced me to the term “read vs. write” communities. There are a number of communities that are simply consumers of a particular thing. Take Star Trek fans for example. They can be rabid in their love of the show but they really don’t add anything to it. Open source communities, on the other hand, can influence, sometimes greatly, the project to which they belong. These “write” communities have to be treated differently than their “read” counterparts.

He also stressed that the role of “community” manager has a lot in common with traditional managers. When I managed people my job was to protect and isolate them from the crap from above. I wanted my team to focus on helping customers and solving problems – not worrying about politics. A good community manager should do the same, especially since most open source communities are volunteer. Add a dash of bureaucracy and watch those people flee.

Plus – his talk was free of Powerpoint bullets.

Right after the talk the lady sitting next to me introduced herself. It turns out she was Tara Spalding, the head of marketing for Groundwork Open Source. I was impressed that she treated me so civilly after I really bashed her MonitoringForge efforts. I wanted to stress to her that part of my issues deal with years of baggage over Groundwork (when they started out they represented the worst in fauxpen source) and in part my jealousy that they managed to get and run through tens of millions of dollars in investment (what magic I could work with just a fraction of that money). She stressed to me that their efforts are truly aimed at providing a forum for open source monitoring as independent as possible from Groundwork itself, but like a lot of open source efforts, someone has to foot the bill for the servers, maintenance and site design so they stepped up. My attitude softened quite a bit after our conversation, and although I am not quite ready to endorse it, I’ll be keeping a much less cynical eye on the site.

Jono was talking to some folks from Rackspace, so I butted in to the conversation. They had a group at the OSBC as well as a number of people at the cloud conference going on at the same time across town. We chatted about their new data center going up in Chicago (I, of course, provisioned the OpenNMS servers there) and their amazing growth in general.

Jono and I then went down to lunch and spent an hour talking about a huge number of things. He showed me the new artwork and design in Ubuntu (trés pretty) and at one point his wife, Erica Brescia (CEO of BitRock) stopped by. He pointed out that if you google “Erica Brescia” and click on images, my picture of the two of them at LugRadio Live in San Francisco is like the third hit.

Let’s make it the first hit, shall we? Everyone link to that picture and put “Erica Brescia” next to it. 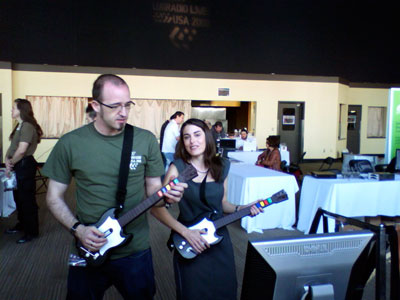 Toward the end of the meal I got to meet Stephen Walli. I’d never met the subject of a User Friendly cartoon before. He’s a great guy and if you ever meet him ask him to tell you the “yes, but it’s dark and she’s been drinking” story.

The afternoon session started at two and I decided to see Jay Lyman of the 451 Group talk about the cost benefits of open source. One thing that caused me to raise my eyebrows was a slide about where the perceived cost savings were. Licensing costs were number one, of course, but number two was license management.

I remember from my OpenView days that moving OpenView from one server to another often took a day or two just to navigate the bureaucracy of getting a new server-specific license key. The fact that it was such a concern for organizations, however, came as a surprise.

My next talk was on open source license compatibility given by Karen Sandler of the Software Freedom Law Center. She represented us during our time of troubles, and it is always nice to see her again. As we were talking a friend of hers came up and gave her a hug. I looked down at his badge to find I was standing next to Jeremy Allison.

In the span of four talks I had gone from open core to mainstream open source to free software.

The OSBC had a legal track in its program, and most of the talks were focused on how to defend yourself when the SFLC comes a callin’. It was neat to see the other side of the story presented in an entertaining manner by Karen, with the phrase “free software” repeated over and over again.

Now I am not a lawyer but I have more than a passing acquaintance with open source licensing. One thing people don’t realize is that if you distribute open source software (well, specifically GPL software) you are required to distribute the source at the same time. If you choose not to you are making a promise to provide the source to all comers for the next three years. Seriously – if you hand out Linux CDs at the local computer club you technically have to be willing to hand out source CDs as well. The media has to be the same. You can’t hand out binary CDs and tell people to get the source from a website, since that person may not have access to the web (think of a remote place in Africa as an example). Since we only distribute OpenNMS via the web it is okay that the source is also distributed via the web, but in other cases the binary and source media must match.

Karen pointed out that the best thing to do is to ship the source when you originally distribute the software, since your requirements under the license are satisfied immediately, but the second best thing is to have an easily accessible place for people to get it. In any case it is important that you respond to requests for code in a timely manner (and having a centralized repository makes this much easier).

Speaking of timeliness, she also addressed why the SFLC is quick to investigate license violations. Quite simply, licenses would be useless without enforcement. But she also noted that the creators of free and open software want people to use it, so they are much more focused on compliance than punishment (my words, not hers).

It was a good presentation (and Karen had a splitting headache during it but it didn’t show) but as I was in a room full of lawyers I can’t let go without at least one lawyer joke. In the breakout rooms there were two sets of doors. There was a pair near the speaker podium and a pair at the back of the room. The pair at the back was marked by a sign listing the speakers, and in every room I was in over the two days this worked perfectly (people came in the proper door). During Karen’s talk not one but two people came in the door right in front of her, which I found amusing.

I was pretty much done after her talk. I changed into jeans and headed to the airport, enjoying the unusually warm weather in San Francisco. It was a fun conference, and at the moment I will probably come back next year.

But I don’t expect to be a speaker. (grin)