I saw a news article this weekend concerning the director/actor/writer Kevin Smith. It seems he was bumped from a Southwest Airlines flight from Oakland to Burbank because a Southwest employee determined he was too big to qualify to travel in just one seat.

He apparently used his powerful social networking presence to “scorch the earth” with his complaints.

The first thought that went my mind was, dude, I really like your movies and Chasing Amy is a classic, but as a frequent flyer, if you are too big to fit in a seat you should have to buy two tickets. Otherwise, you end up in part of my seat that I paid to use, small as it is.

But the second thought that went through my head, hot on the heels of the first, was, wait a second, Kevin is a big boy and I’ve never seen him in person, but he’s not that big. I’ve sat next to much larger people.

Perhaps the media is, err, making a bigger deal (forgive the pun) of this than is warranted?

I was catching up on my RSS feeds this morning and noticed that Kevin had posted on his blog (which is rare). In it he tells his side of the story, which is quite at odds with the published accounts, where it turns out he was flying standby and Southwest made the decision that they could not accommodate him. For some reason they used his size as the excuse to bump him from the flight.

What is really making him angry is that now he has to carry around this very public stigma of being “Too Fat to Fly”. 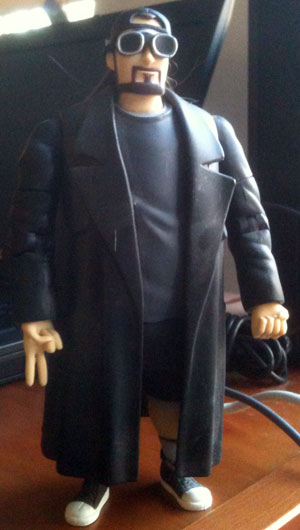 Look, as someone who has been overweight much of my life, I can sympathize. One of the reasons I work so hard is to overcome the stereotype that fat people are lazy. If you haven’t lived through it you can’t understand.

Now this doesn’t mean I’m forgiving of having an extra-large person sitting next to me on a flight. It’s not an issue of discrimination, it’s an issue of my rights. I paid for a certain amount of room and I should get to use all of it. If you need more room than the default, buy more.

However, Kevin met all the criteria for flying in one seat, and telling people otherwise is discrimination.

I’m a frequent flyer, and it is amazing how many frequent flyers have my approximate body shape. Stick three of us in the exit row of an MD-80 and, yes, we’re going to be a little cramped. We all fit into the seats but there isn’t always enough shoulder room. That’s just the way modern coach seats are laid out. Since it helps to have “elite” status from frequent flying to get in the exit row in the first place, you can imagine that this occurrence isn’t all that unusual.

But I think Kevin’s treatment is a symptom of a much greater problem in air travel. Somewhere in the last 20 years we’ve gone from honored guests to criminals.

First, there is the demoralizing security process. You might claim that it is for our own safety, but the fact of the matter is that it is security theatre. The process didn’t stop a man in the UK from trying to bring a liquid bomb on board, but it now requires every one of us to have our shampoo bottles scrutinized. A man flying into Detroit tried to set his undies on fire, and now every one of us has the potential to be photographed basically naked, even though it has been demonstrated that it is still possible for a determined person to get a weapon on a plane even with full body scans.

One of the most sane articles on the subject comes from the Salon “Ask the Pilot” column which states in part:

… over the five-year span between 1985 and 1989 we can count at least six high-profile terrorist attacks against commercial planes or airports. In addition … were the horrific bombings of Pan Am 103 and UTA 772, the bombing of an Air India 747 over the North Atlantic that killed 329 people, and the saga of TWA Flight 847.

We’ve been dealing with issues of air terrorism for years now, but why in the world have we gone so crazy insane about it? There are over 50,000 traffic fatalities in the US every year, but we accept that in exchange for the ability to drive at 70 mph. Instead of theatre there are things that can be done to minimize the risk to air travelers without treating them like baggage.

Second, there is the plane flight itself. Gone are complimentary snacks and in some cases complimentary beverages. The planes are cramped and often dirty, as there is no time between flights to clean them properly.

Finally, financial conditions are such that many planes in the air are rather old. I know pilots and understand from them that even old planes that are well maintained are very safe, but I’ve personally experienced problems with the aging American Airlines fleet of MD-80s which results in delays and cancellations as repair parts have to be brought in (the problem being dutifully caught in the pre-flight check).

This subject is on my mind since tomorrow I fly for the first time in 2010. It will be a little less traumatic for me since my elite status gets me upgraded to first class. Even then, I still was nearly molested by an American Airlines flight attendant and have never received an acknowledgement to the letters I wrote complaining about it.

What’s the use of working toward elite status if you don’t want to fly?

Luckily for me, OpenNMS has grown to the point that I don’t have to be on the road so much. We have others who can do what I used to do, and in fact do it better.

Deep down I still view air travel as something magical. I mean, seriously, tomorrow I get on a plane at 9am and I’m in LA by 3pm, local time. There I get to meet up with Gareth, Ilan and the rest of the SCaLE gang, get to attend one of my favorite conferences of the year, and I hear the keynote on Sunday is just awesome.

I get to sit in a chair in the sky.

It’s even more amazing when I travel to another country. Get on a plane, take a nap, and suddenly I’m elsewhere, with a new language to learn, new friends to make and new things to do.

But my experiences and those of Kevin Smith have me checking out Amtrak train schedules, and it is doubtful I’ll be on Southwest any time soon.

I have enough problems without being “too fat to fly”.