Just wanted to post a quick note that in the recent Linux Questions poll on the best network monitoring application, OpenNMS came in second. 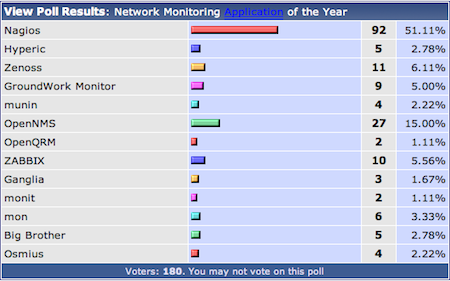 The winner, Nagios, pretty much destroyed the field, but OpenNMS got more than twice as many votes as the third most popular choice. This wasn’t unexpected, since Nagios is much more of a general purpose monitoring solution, especially within the target audience of Linux Questions. OpenNMS is built for scale, and thus appeals to a smaller set of users.

It’s always nice to know that the work you do is appreciated, so thanks to all who voted.