Okay, for many, many months now I have been agonizing over getting a new phone. My trusty LG Fusic on Sprint (now for sale on eBay) has been with me for over 3 years, and with the advent of all the new smartphone options available I wanted something a little more versatile.

I live out in the woods of North Carolina, and wireless phone coverage is iffy at best. Sprint seems to have the best service (which is why I’ve used them since 1998) but it is only best because the other major players have closer to no coverage.

However, over the last year everyone but AT&T introduced a femtocell product. This is a small device that plugs into your broadband internet connection and instead of making calls over a cell tower, it acts like a bridge between your phone and the network. It’s like having a cell tower in your house. This has opened up some options for me.

Unlike many people, I was pretty happy with Sprint. They have a good network and as long as you don’t ever, ever, have to talk with customer service you’ll probably be happy with them. The downside is that they rarely have cool phones.

Verizon has the best network overall, while AT&T is oversubscribed and T-mobile is a newcomer to the North Carolina market, but the latter run on GSM networks which means your phone will work practically anywhere. I travel enough overseas that this is a consideration.

In my hunt for a new phone I narrowed it down to the following choices:

So, the day before the Droid launch I was a little disappointed. While no GSM is not a deal-breaker, the fact that I wasn’t sure I could sync my contacts, coupled with the exceedingly high prices Verizon charges, had me thinking about waiting a few months more.

But then I found out that AT&T’s femtocell offering (the 3G Microcell) had just become available in my area. So I am now the owner of a 32GB iPhone 3GS, replacing my iPod Touch and Fusic.

The Microcell meant that I could get AT&T service at my house. At $150, it was a full $100 off of the price of the Verizon solution, and with the plan I got it included another $100 rebate, making it even cheaper than Sprint’s $100 Airave (which requires an additional $5 per month as well as using minutes). With AT&T I got the lowest minute plan at 700 minutes per month, but for $20/month extra I get unlimited calls on the Microcell. With rollover minutes I don’t think I’ll ever run out, since I make a lot of calls from home. 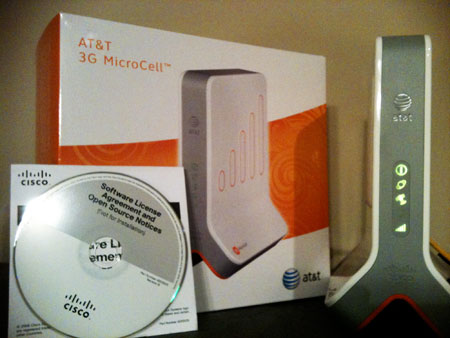 The Microcell installed pretty easily. It requires a GPS signal so that they know you aren’t using it overseas (where the roaming revenue lives) and thus you have to have it near a window, but since I have skylights in my living room (as well as an Ethernet switch) it was simple to install. It took it about 20 minutes to become active.

The Microcell is Cisco-branded, and I thought it was interesting that it included a disk full of copies of the GPL and other licenses (but no source code) for a number of common GNU/Linux software. I wonder how hackable the Microcell will be? A nmap scan shows that it only responds to ping, so I’m not sure there is a way to get into it over the network.

There are a few downsides. One was that my Sony Ericsson K610i phone (a gift from Alex Hoogerhuis), while 3G, wouldn’t connect to the Microcell (although it connected to AT&T’s network just fine). I don’t know if it was because the phone is unlocked or just because AT&T’s 3G isn’t necessarily the rest of the world’s 3G. So I ended up getting my wife a Sony Ericsson W518a instead, and it connected just fine.

The second was that Embarq had their quarterly DSL outage just after I got everything set up. Without broadband the Microcell is useless, so I was back to one bar (if that). Everything was back up in about 2 hours so I shouldn’t have to worry about it again for another few months.

As for the iPhone – I like it. I knew pretty much what I was getting into since I had a Touch. Since it now supports the bluetooth A2DP protocol I can stream music over FM using the MotoRokr T505 in my car. The voice control is pretty cool (just say “Play Songs by Spoon” and voilà) but it had a lot of trouble with voice dialing. I think it had something to do with the 1300+ contacts I had in my address book. An hour or so spent pruning it down to 300 (I had several dead people listed, for example, plus a number of ex-employers personnel lists) seems to have helped. The camera is crappier than I thought it would be, but the reviews of the Droid camera aren’t much better.

I expect my next phone to be powered by Android, but that is at least 2 years away. A friend of mine just bought a Droid and he’s also an iPhone user, so I look forward to his review.

Anyway, being on the ‘net almost everywhere I go is a little addicting, and I’m on the lookout for must-have iPhone apps. Please send along any suggestions.