One of the many things I do at OpenNMS is handle the finances. This often requires me to interact with the Federal and State governments. To say that the system could be simplified is an understatement.

For example, take this postcard I received in the mail. It was for a corporation that was dissolved in 2003, but for some reason the office of the North Carolina Secretary of State (with whom I dissolved the corporation) still thinks that it is, in some form, active. 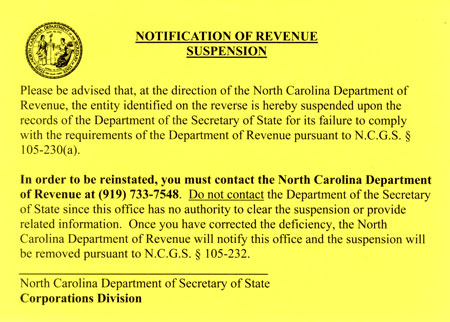 As you can see, the card tells one not to contact the office of the Secretary, but instead to call a particular number to talk with the Department of Revenue.

Go ahead, dial it. I dare you.

It appears that the Department of Revenue didn’t pay their phone bill, and the number has been disconnected.