I love the Internet. I just got called an asshole (well “@#*hole”) by a famous person on Twitter. Not that it is the worse thing I’ve ever been called, but I think it is delightful that someone I’ve never met is able to sum up my personality in so few characters. 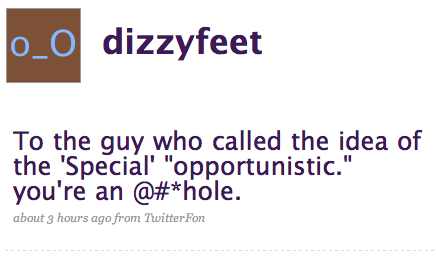 The famous person is Nigel Lythgoe, once a producer of the American Idol TV show. I know him best as the producer/judge on So You Think You Can Dance (SYTYCD), a dance competition show that I rarely miss. As someone who knows absolutely nothing about dance, it is amazing that I like this show so much. One of the reasons is that it tends to have a nicer tone than shows like Idol, and the judges seem to realize that their final cut of contestants are all pretty damn talented, thus their criticism is constructive and every cut is a little bit painful.

Now, unless you’ve been in a cave or “hiking the Appalachian Trail”, you are aware that Michael Jackson passed away this week. At 43 I’m close enough to 50 to say that, for anyone, that is a life too short.

I was never a fan of Michael Jackson’s music, but I recognized that he was talented. A friend of mine in college who was contemporary dancer, went to see his movie Moonwalker and I was teasing her about it (where I went to college most of us were musical fascists and would deride anything that didn’t fit into our definition of “good music”). She laughed and said while that his music was definitely pop, he was an amazing dancer, and I can understand that for people in dance his passing is a great loss.

Note: for all of you geeks out there, Mr. Jackson has a patent.

Unfortunately my bullshit meter is pegged by a lot of the “tribute” stories I’m seeing on TV. Plus, I’ve been so inundated with Michael Jackson music that “Billie Jean” is currently a two-day long earworm living in my head (they even had a bluegrass version of it on Back Porch last night).

I follow Mr. Lythgoe on Twitter, and he is trying to organize a Michael Jackson tribute show for SYTYCD (and has talked about little else in the last couple of days). If anyone can do it, I expect he can, as American Idol got permission to use his music two seasons ago, and in fact they are re-running that very episode on Monday.

While I have no doubt that Mr. Lythgoe is trying to honor Mr. Jackson with the Idol repeat (the first Idol repeat in prime time, ever, I believe) and his desire to have a show dedicated to his dance styles on SYTYCD, I had the temerity to suggest on Twitter that all of this flurry of activity might look “slightly opportunistic”. It was simply my advice as an outsider that he should be aware of it. Think about it – if Mr. Jackson’s influence on dance was so important, why wait until now to have a show about it? Wouldn’t it have been at the top of the list when the producers were getting permission to use his music on Idol? I’m not saying that they shouldn’t do it, but there needs to be a certain tone around the show to prevent it from being seen as just a cheap grab at ratings.

Maybe I struck too close to home. Trust me, in 30 days, sad as it is, very little will be in the news about Mr. Jackson. We, as a culture, just don’t have the attention span for it. If you are in the business of news, stories about Michael Jackson are hot right now. If there will be a Michael Jackson version of SYTYCD, trust me, it’ll be as soon as it possibly can be done.

So what does this have to do with open source? Well, unpleasant as it may be, it is extremely important to listen to what your critics are saying. It is easy to dismiss them as a bunch of assholes, but you do it at your own peril. In many cases they echo the thoughts of people you need to reach, and understanding how they think is the first step.

For example, my experience with open source seems to be 180 degrees in the opposite direction from Matt Asay. For better or worse, Mr. Asay is seen as a spokesperson for open source software by some, and I have to be able to respond to his ideas, which range from the bleeding obvious to the downright asinine (with a little truth thrown in to help make them seem legit). While I try not to “feed the trolls” by commenting too much, it is important to my business to understand how people like him think.

In any case I sent that tweet to Mr. Lythgoe with the best intentions and got labeled an asshole. So be it. I would rather have my actions misunderstood and get called names than to be seen trying to make a buck off a dead guy.