Note: This is one of my “travel” posts with little OpenNMS content.

After the successful Users Conference in Frankfurt, I decided to take a few days to visit a friend of mine in Dresden. Although the weather did not cooperate, I had a great time.

I took a Lufthansa flight from Frankfurt to Dresden, and after one of the craziest landings I’ve ever experienced (the pilot took that 737 on basically a slalom course before landing, hard, on the runway – I swear that at one point the wings were vertical) I met my friend and we took the train into the city.

The first stop was lunch and where I got to experience the German take on the döner kebab. It was fantastic (I liked it so much that I had it for lunch the next day). After lunch we took a walking tour through the city while trying to ignore the light drizzle.

In one section of town the buildings were decorated to reflect different natural elements: water, sun, earth. 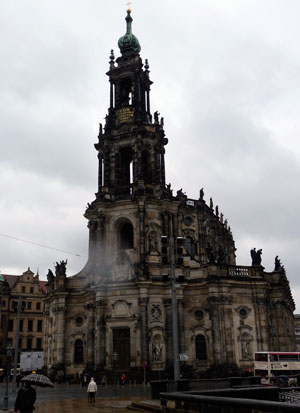 Right on the river Elbe are a number of impressive buildings, including the Dom (the Hofkirche) and the Church of Our Lady (the Frauenkirche). 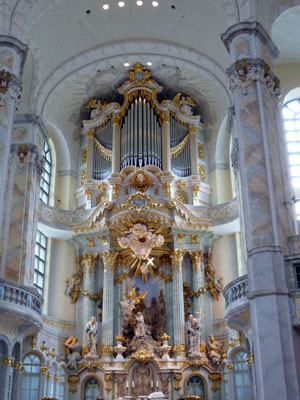 The latter was basically destroyed in the bombing of Dresden during World War II (I will now always remember the dates 13-15 February, 1945) but it was rebuilt in 2004. 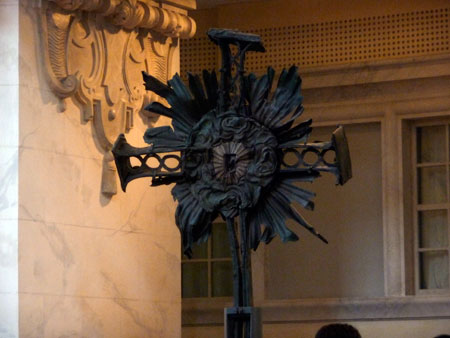 One of the original crosses was on display where one can see how the heat from the fire melted part of it. 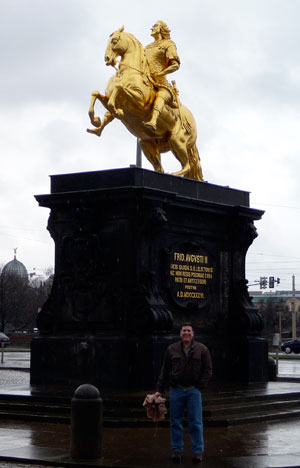 I got a picture of me with the Golden Reiter, a golden statue of Augustus II the Strong.

While the statue is incredibly bright and shiny, there are only about 300 grams of gold used in the coating. Augustus was also king of Poland, so the statue faces toward that country. His body was buried in Poland but his heart remains in Dresden (in the Hofkirche).

There is a common misconception that the stance of the horse in equestrian statues illustrates how the rider died (both front legs up – died in battle, one leg up – died from wounds sustained in battle, all legs down – died at peace). While the Golden Rider has both legs up in the air, Augustus died of complications from diabetes.

Speaking of Augustus, he liked to fashion himself as an eastern version of Louis XIV and so collected a number of treasures. Many of these are on display in a gallery called The Grünes Gewölbe. Each room in the gallery is dedicated to a different type of art: from things made of amber and ivory to items of silver and gold. The most impressive pieces were the jewels and jeweled artwork. Definitely an exhibit not to miss. 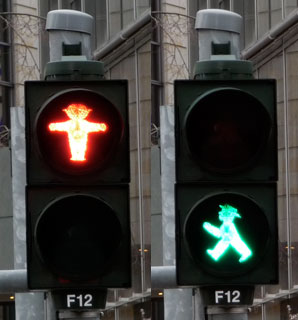 Another thing I was delighted to see: the pedestrian crossing lights, or Ampelmännchen. On my first trip to England many years ago I stayed with Jonathan Sartin and his son had a odd pair of toys: a red figure with his arms outstretched and a green figure that was walking. He told me that these were “East German” crossing signals. I had totally forgotten about them until I saw them in Dresden. There is something about them that captures the imagination. 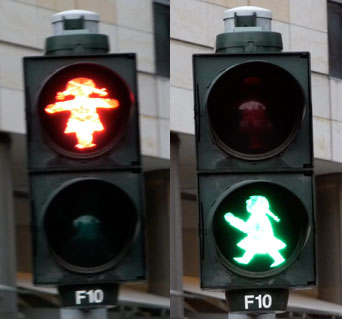 Apparently there are different versions as well. I saw the Ampelfrau as well as the Ampelmann and a bicycle. One thing I didn’t see was much else to remind me that Dresden was once part of the Soviet Union. 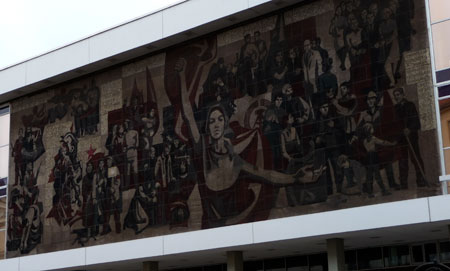 I was only in Dresden for a couple of days, but already I would like to go back. It is rather close to both Berlin and Prague, so perhaps I’ll be able to visit those places as well, using Dresden as a base of operations.

My only wish is that next time the sun will come out.