Today is my 43rd birthday. When you get to be my age, it is just another day (although please don’t let my blasé attitude lead you to think I’m not happy to have made it another year) and I tend, now, to only focus on those birthdays that end in a zero.

Over the weekend I got not one but three video games for my PS3. 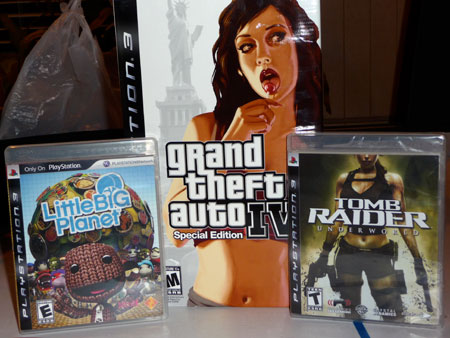 It’s funny. I have had my Playstation for almost a year and these were the first titles I’ve gotten for it. I bought it mainly as a Blu-ray and media player so I never really have played games on it (although we did borrow a few). As an old guy I tend to use the Wii (insert joke here).

I’m pretty excited to see what the state of the art of gaming has become. The first game I got was Grand Theft Auto IV, extry crispy edition, which comes with a CD with the music from the game, a duffle bag and a keychain all contained inside a safe deposit box. I got it from my friend Bob, who told me it was cheaper to by the set than just the game. Nothing says I love you like hookers and violence.

I also got the latest Tomb Raider. I played I-III on the PC and I’ve always liked these games, although they have become a bit dated. I’m eager to see how well the franchise has aged.

But the game we’ve been wasting most of our time on is LittleBIGPlanet. It is pretty much the polar opposite of GTA IV. It’s kind of silly but a load of fun, and the Stephen Fry narration is priceless.

I haven’t searched for it yet, but my guess is that LittleBIGPlanet is going to be the next big platform for machinima. With the ability to highly customize both the characters and the environment it is a natural, and while the characters don’t “talk” neither did the guys in Red Vs. Blue so perhaps that won’t be a problem.

I wanted to write about something fun on my birthday, because if my time on this planet has taught me anything, it’s just that you really need to enjoy what you do. I love working on OpenNMS, and am I thankful for all of the folks who make it possible for me to do so.