Australia has the prettiest paper currency in the world. 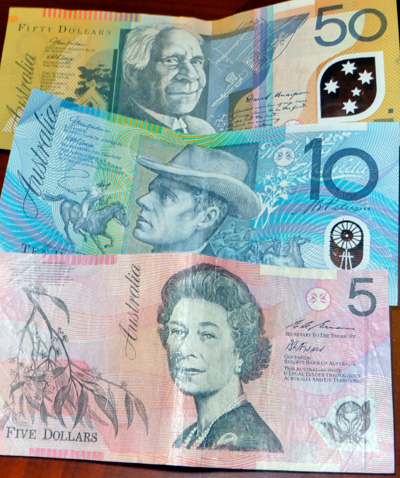 Well, I think technically it’s made of plastic, but it is gorgeous. Each denomination is a different, bright color as well as a different size, and for protection from counterfeiting there is a clear, embossed plastic window (different for each bill) in the lower corner. Sure, the Euro is similar but it just doesn’t work as well, and we’ll just ignore US currency, although once drab it had a sort of stately elegance but has now turned into a hideous mashup of bad color and worse design. Some compare counterfeiters to artists and I guess the goal was to make money so ugly that no artist would want to copy it.

Australian coins, on the other hand, are less than perfect. There is no penny (amounts are rounded to the nearest increment of 5) and sub-dollar amounts are silver, while the dollar and two dollar coins are gold.

That is pretty straightforward, but the sizes are all wrong. The 50 cent coin is about the size of a small truck tire, and the two dollar coin is tiny – about the size of an American dime (but thicker). I didn’t think I had much change at lunch because of all the little gold coins but it paid for my meal and then some.

On another good note the US dollar is rallying lately and thus the exchange rate has dropped in my favor. Let’s hope it stays that way at least for the next couple of weeks.

Today was my first day at the client site, and it went pretty well. They had a place for me to sit and I was given a fancy key card/badge so I can come and go as I need. The downside is the network is pretty locked down and I’m having to use a Windows box as a desktop. I use putty to ssh into the OpenNMS server and IE (gasp) as my browser.

Does anyone else have the issue when looking at the OpenNMS main page on IE that the outages box and the categories box are right next to each other, with no space, but if you slightly resize the window the space magically appears? Seriously, our webUI may not be the best but that just bad rendering on IE’s part. I’ve thought about installing Firefox but I figure I am exposed to IE so rarely I might as well use it to note any weirdness.

I was pretty well adjusted to the time until yesterday, when I lay down for a short nap and slept 14 hours. It actually works out pretty well, since I can get up around 4am to 5am and communicate with the US before heading out to the client, and there isn’t much for me to do in the evenings. Still hoping to get some folks together on the 20th.