Well, things have been a bit crazy around here getting ready for Dev-Jam.

This will be our fourth developer’s conference and it is one of my favorite times of the year. This year we are moving to Georgia Tech (a change from UMN) and I can’t say I’m looking forward to being in Atlanta in high summer, but the rooms we’re using have air conditioning and bandwidth so what more could we want.

We also have people from five countries in attendance. In addition to the USA, we have two guys from the UK, one from Venezuela, one from New Zealand and Alex – who is German, yet works in Switzerland and lives in France – I’ll let you choose which country we should count for him.

Almost all of the OGP was able to make it, so it should be a productive week. Stay tuned for updates from the conference starting this weekend.

Last Thursday I was invited to Michael Coté and John Willis’s weekly podcast. John was a bit late coming to the party, so Michael invited a friend of his, Matt Ray of Zenoss, to join us. I got to talk about OpenNMS (imagine that) as well as my current distaste for the overexposure of the term “cloud computing“.

When John joined the call he tossed OpenNMS a bone by bringing up software licensing. One place where OpenNMS differs greatly from other “commercial open source” companies is that while support and services are available, the software is 100% free and open. Matt’s company publishes some of its code under the GPL (which Matt quickly pointed out) but all of their “non-community” code has a proprietary license.

Matt seems like a nice guy, so I didn’t rise to the bait, plus he had a cold. Most “commercial open source” companies have a business plan that relies heavily (if not entirely) on software licensing revenues. Since it is difficult to sell open source software more than once, software developed for this model can’t be free and open. Since a smart business wants to maximize profit, these business should be finding ways to drive people from the “open” solution to the proprietary one. Most importantly, a smart business will make decisions concerning their “open” solutions to maximize the migration to proprietary software.

This isn’t a bad model, or even a wrong one. I just grouse at using “open source” in any fashion to describe it.

Matt did give us a compliment by mentioning that the new Zenoss Masters program is modeled on the OGP. Building community is fun and we wish them the best of luck with that.

The biggest comments so far on the podcast have been about the ability of OpenNMS to replace portions of Micromuse (now IBM) Netcool. I’ve always been a big fan of Netcool, and I worked with Micromuse even before they had an office in the US. But the price was always astronomical, so a couple of years ago we decided to implement some of the functionality of Netcool into OpenNMS. We have a number of clients who have replaced Netcool, but we are currently working with a large telco in Italy that will be our biggest challenge to see if we can take a very large Netcool install and replace it. David is spending several weeks a month in Italy with Antonio for the rest of the year to implement some of the migration. It’s hard work, but fun.

Both John Willis and Doug McClure posted about it on their blogs, so I hope to be able to send them some actual numbers in the near future.

Hrm, lessee, what else is going on …

OSCON is this week. I went last year, but with Dev-Jam next week I just couldn’t justify going this year. Plus, it is really more of a coders show and I’m not a coder.

LinuxWorld is the week after Dev-Jam. They have been kind enough to give us a booth for a couple of years, but the show has become too much “commercial open source” for my tastes, so we didn’t ask for one this year. Jeff is going there to work in the Open Solutions Alliance (OSA) booth. While we’re not a member of the OSA, OpenNMS integrates with both Hyperic and Concursive, which are members, so we’ve been asked to demonstrate this interoperability. David decided to call this integration the “OUCH” stack (grin). It stands for OpenNMS, Ubuntu, Concursive and Hyperic. If you’re going to the show be sure to say “hi” to Jeff.

Finally, I want to send a “shout out” to Eric Bradford at echo. He sent us a card this week for the Fabulous, Amazing, and Incredible Wall of Cards. I’ve included it below, as it made my day. 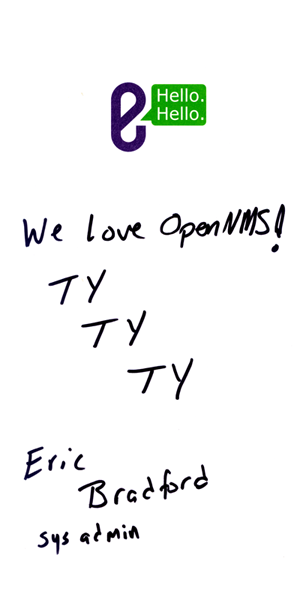