Since this is the first week of June, I’ve started to get excited about the upcoming Dev-Jam at the end of July. We are hoping to raise enough sponsorships to be able to fly in our Google Summer of Code students, so I’ve been beating the bushes for sponsors. Since Red Hat is down the street, I decided to ask around to see if I could meet their community person.

I’m an unabashed fan of Red Hat. Now I know the company has some detractors, and they have some valid points, but all in all Red Hat is a true open source success story. They have done well financially, and despite having to deal with the whims of Wall Street they have kept true to the ideals of free and open source software. Red Hat employees contribute an enormous amount of time to open source projects, and almost all of the software they create is available without a fee (otherwise CentOS could not exist).

Most importantly, Red Hat has remained independent. With a market cap of over US$4 billion, I would challenge anyone to name a more successful open source business.

So why doesn’t Red Hat get more respect? One reason is that they are not headquartered in Silicon Valley. The Valley is a funny place. There are some very clever people there, but sometimes I wonder if that cleverness gets in the way of getting things done. Red Hat gets things done.

One of the most intelligent moves Red Hat made was the creation of the Fedora Project. The open source mantra of “release early, release often” doesn’t work well at the enterprise level, so how can one both embrace open source and yet provide the stability required in mission critical applications? By creating and supporting the free software playground known as Fedora, Red Hat not only stimulates the creation of the next version of Red Hat Linux, there is an obvious and distinct separation between the “commercial” product and the “community” project.

I introduced myself to Greg Dekoenigsburg (known as gdk) via e-mail. As the Community Development Manager for Red Hat, I thought he may be able to help us out with Dev-Jam, and as we exchanged messages it became clear that here was a guy who “got it” when it came to open source.

At OpenNMS we’ve been wanting to get more involved with our friends down the road at Centennial Campus, but since OpenNMS is a Java application, that hasn’t been easy since Java was non-free. OpenJDK changes that. Now that Java is free, Fedora is eager to bring enterprise-grade Java applications into the distro, and part of that will be figuring out how to package it. Like many other Java projects, we just bundle all of the jars we need in with our app and drop it in /opt. Since I work with one of the best software packagers on the planet, Ben Reed, I knew his input would be invaluable and we all decided to meet for lunch. 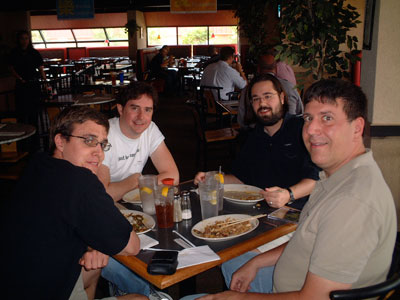 Michael, gdk, Ben and me at Crazy Fire

It was a lot of fun. gdk brought along Michael DeHaan and the four of us talked open source, geek stuff and ate Mongolian barbecue for a couple of hours. It was nice to deal with people who understood the value of open source communities while still running a business around it. Or as Michael put it in an e-mail to me afterward “It was very nice to meet some other folks that are following the real open source way of doing things.”

There is still a lot of work to be done, and you can get involved. gdk has decided on an appropriate mailing list, and you can also join the #fedora-java channel at irc.freenode.net.

And don’t forget to consider sponsoring Dev-Jam, too. (grin)