Wow. Okay, sorry for not updating this sooner, but Norway was pretty fantastic and I 1) didn’t have time and 2) had too much to say (imagine that). I traveled to Oslo specifically to meet up with Alexander Hoogerhuis.

Alex has been part of OpenNMS since 2003 (or at least that was the date of his first wishlist purchase). He runs a consulting business out of Bergen, Norway, and uses OpenNMS to help his customers manage their networks. I met him in person back in October of 2006, but before that we missed each other from a number of locations around the world – almost always Alex’s fault – so we actually assumed that since we only knew him through e-mail and IRC he must be a ‘bot and not a real person (grin). His nick, _snd, thus was an obvious choice for the #opennms channel robot, _sndbot.

I asked Alex what he did for a living and he replied that he was one part plumber, one part psychiatrist. When I ask for more detail, he explained further: he goes into large accounts and helps them streamline their networking equipment and servers, sometimes purchasing new servers but often decommissioning old ones. The psychology bit involves getting people to accept change in order to create a more manageable and a higher performing network, often using open source software.

He pointed out that he does a lot with mail services like postfix, spamassassin and amavisd, and while all of the information he uses is available on line, it is his experience with these tools that is of benefit to his clients. It is no wonder that he likes OpenNMS, since its power lends itself well to people who are used to customizing other tools like the ones he uses for mail.

Anyway, I flew into Oslo since the flights from Milan to Bergen were inconvenient and expensive, and arrived a little after 9pm. Alex puts in a lot of miles on SAS so he just hopped on a plane from Bergen, rented a nice Volvo S60, and picked me up at the airport for a scenic drive across the country.

But first we had to stop by his hosting provider to pick up a box he was shipping to Singapore. It is in the same building that serves as one of the two peer points for Internet traffic into Norway. 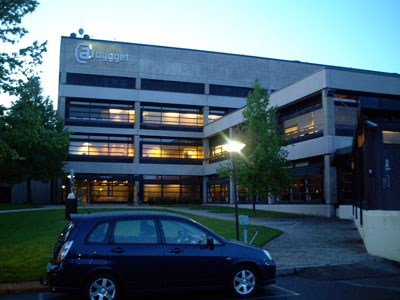 We then headed north to Eidfjord. It didn’t get to what I would call “dark” until after midnight, and I’m not sure it ever got really dark, but as we were crossing the highlands it did start to sleet and snow (the Norwegians have 20+ words for snow) and the clouds definitely blocked out was little light there was.

Eidfjord was reached about 3am, and Alex had picked out a couple of rooms especially for my visit. He told me to look out of the window as soon as I got up, and with that we said goodnight.

I looked out before I went to bed and could make out some cliffs and water, but I was totally unprepared for what I saw the next morning. He called my room at 9am and told me to be sure to put on some clothes before I opened the blinds. This is what I saw: 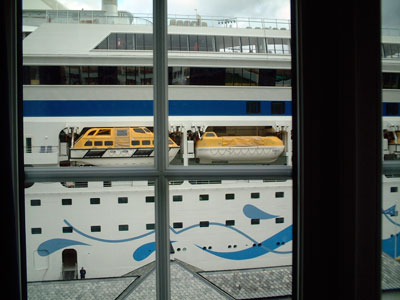 The cruise ship Aida from Germany had put in overnight. Alex actually wasn’t expecting this, and had forgotten to cover up before going to the window. So basically the people on the ship got a “scenic” introduction to Norway.

After breakfast we hopped back in the car for the rest of the journey to Bergen.