Antonio pointed out to me that there is very little “unsettled” land in Europe. He once flew over Montana, and he remarked how uninhabited it was. In contrast, even flying over remote mountainous sections of Italy you will see buildings and lights.

That is one reason that it seems Europeans are more focused on the environment, or at least conservation.

Automobiles, one of the great carbon consumers on the planet, are much smaller here. Many run diesel engines which are more efficient than gasoline (although some might say that they pollute more but the diesel in Europe has considerably less sulfur than the diesel in the US). There tends to be more public transportation, although I heard one person on the radio in the UK complaining about increased restrictions on cars and he pointed out that a bus running with few passengers could pollute more than if those passengers took separate cars, but at least the option exists.

Fuel prices for cars in Europe haven’t changed much since I was last here, perhaps a 10% rise versus our 50% rise, but that is due in part to the weak dollar. In any case, it is still twice as expensive to buy fuel here than at home.

But I saw two things in Milan that were both quite clever, rather inexpensive and could produce some serious savings.

The first involved escalators in the Metro. We got off the train and were heading up when I noticed that the escalator was not moving. I went to take the stairs and Antonio said “don’t worry” and kept going. The escalator started up as he got close.

How cool is that? Considering the number of airports/train stations/shopping malls/etc. that I’ve been in where the escalators just kept going and going with no one on them I can guess that the energy savings over time would be huge.

I saw something similar when we got back to the hotel. It was nearly 1am and when we exited the elevator onto our floor, the lights in our hallway were dim, but came on when we approached.

This has the added benefit of removing that bright bar of light from the hall that always creeps in under the door of my hotel rooms. Bonus.

My friend Lyle is always comparing open source efforts like OpenNMS to his efforts in renewable energy. In both cases we are trying to strive against the inertia of how things have always been done, and there is also that eureka moment when our clients understand that they can realize savings (in money, time, or carbon emissions) without much sacrifice, if any at all. 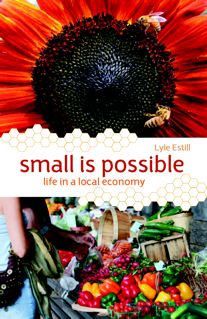 Oh, I got a stack of copies of his new book, so if your support renewal is near expect a book along with your OpenNMS shirts. Yours truly is featured prominently in one chapter.