We woke up to another unusually beautiful day in London, and started to make our way to Heathrow.

The cheapest way was to take the Tube, and the first leg of the journey was a little awkward as it was rush hour and we were traveling with luggage. But a few stops along the Piccadilly Line the crowds started to thin and we were able to find seats out of the way of the other passengers.

Then I made a travel mistake; a rookie mistake unfitting a seasoned traveler. About five stops away from the Terminal I remarked that “hey, we’re making great time”.

No sooner than I said this, the conductor came on the loudspeaker to announce that someone had thrown themselves under a train in front of us, so they were closing the Piccadilly Line and we were encouraged to find other transportation. I’m afraid that I wasn’t as sympathetic as I might usually have been to such news (and I’ve been told it happens more than you might think) but we did have more than two hours to make it to the airport so I wasn’t that worried – we just needed to find a cab or a bus to make it the rest of the way.

David got us into a minivan with a number of other displaced travelers heading for Terminal 5. We sat in the back, and it was kind of fun to watch the locals deal with a driver who was trying to take advantage of the situation. He was asking £15 per person, and they quickly beat him down to £10, which was, of course, to our benefit as well. 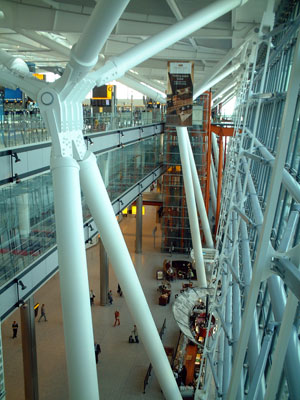 A view of Terminal 5 upon walking in.

So we made it to Terminal 5 with time to spare. Despite all of the problems reported with the new building, it is amazing.

After checking in, we were both hungry so we decided to eat at “Gordon Ramsey’s Plane Food“. Ramsey is huge in the UK. You can’t get away from him. To me he is just the required British curmudgeon on Hell’s Kitchen (all American reality TV shows seem to need an irritable Brit) but in the UK he is on billboards everywhere. And while I seriously wish I had thought of it first, it was pointed out to me that he can look a lot like Davros from Doctor Who. He did win points with me when it was reported that he really likes In-and-Out Burger. 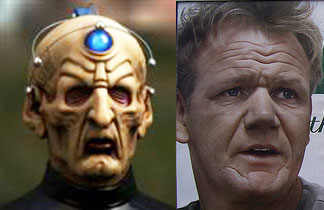 Separated at Birth? Davros and Ramsey
(images yoinked from the web)

We sat at a tiny little table in a real fashionable parlor and had the “Classic” breakfast. It was actually quite good. Not really worth the price but good nonetheless.

After breakfast David and I split up. He was off to Frankfurt for some more OpenNMS seminars and I was off to Milan. Unfortunately for me, the first plane we boarded had a faulty toilet so we had to disembark and get on another plane (a process that was made rather more difficult than it had to be: wait on the plane, get on the jetway. Wait on the jetway, get on the stairs. Wait on the stairs, etc.) But eventually BA came through and I was on my way. Time for a nap.