Well, my long lucky streak has ended. I ride on over 75 flights a year, but rarely do I get sick, due to a combination of compulsive hand washing and Zicam. However, after this last trip to Texas I ended up with a cold, so forgive me for taking so long to post this update.

I spent last Saturday at the inaugural Texas Open Source Symposium in San Angelo, Texas. It was a small conference but I had a good time. I love these “grass roots” shindigs because they are so different from the corporate-laden shows such as LinuxWorld. 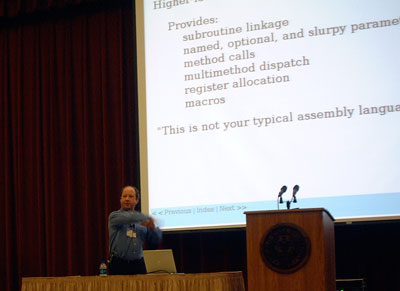 I sat in on both of Patrick Michaud’s talks, one on the Parrot VM and one on Perl 6. I really enjoyed his lolcode examples in Parrot. 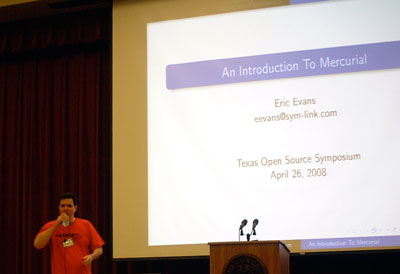 I also sat in on Eric Evans‘ (OGP) Mercurial presentation. Mercurial is a distributed code management system (a la CVS and Subversion). I thought it was interesting, although Eric later admitted he has since switched to git since he submitted the paper topic.

I met some cool people, and learned a few things. Jim Smith, another speaker, was staying at our hotel so he bummed a ride with us, and that was kinda cool. I also met Janet Swisher from Enthought, a company who sponsored the conference as well as a being previously unknown to me. Eric had visited their offices in Austin and found the whole place pretty amazing. I loved the quote from their website “Started with angel funding, it remains free of debt and venture capital.” Heh heh, “free of … venture capital”. Not sure why that line tickles me so much.

Imagine that. A company run by making a profit. Of course, John Willis would say it doesn’t have a chance, but I’m going to keep an eye on them. 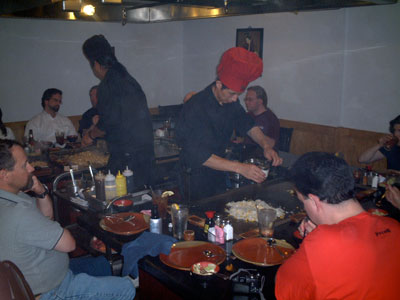 The organizer’s took us out for teppanyaki at a local restaurant. Overall, except for my cold, it was a nice time and might worth checking out next year.