The dark horse open source management platform OpenNMS has definitely shot to the front of the pack with its recently announced Enterprise Edition® and unprecedented 1 vigintillionth download, so we decided to check it out.

Finding the offices of the OpenNMS Group wasn’t so easy. First you have to find Pittsboro, North Carolina, and once in this small town, the local Post Office. The OpenNMS building is behind the Post Office across a small bridge spanning some moat-like ponds. 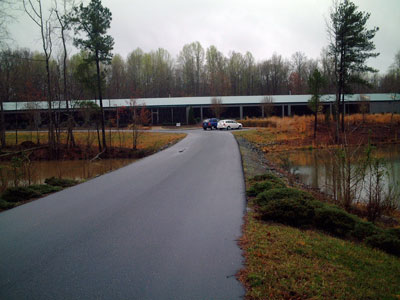 We met with Tarus Balog, CEO, Poobah Emeritus and Knight Exemplar of the OpenNMS Group, and we asked if he could name any of his clients that actually use OpenNMS.

Bubba’s Insurance is the largest business in central, eastern Bynum, North Carolina. Bubba Estill, the sole proprietor, wasn’t at his office, but we caught up with him fishing off of Robeson Creek.

With that Estill went back to his fishing, pretty much refusing to answer questions about the size of his network or the type of equipment he used, although when asked what type of router he has he replied “Ryobi”.

Balog looked pleased with the interview, but we wanted more. When pressed to name a customer that someone might of actually have heard of, he told us that they had a number of customers that were well known, but he couldn’t tell us who there are. However, he suggested a game of charades where we could guess their names.

After ten minutes of wild gesticulations devolving into grunting noises (somewhat in violation of the spirit of the game) we left after he started to disrobe.

We did manage to find one OpenNMS user from a company that is a household name in the US. Christopher Rodman spoke to us under the condition that we wouldn’t reveal the name of his employer.

“We’ve been using OpenNMS for a number of years,” Rodman said, “and we are quite happy with it. Since a lot of our business comes from the Internet these days, it is important that we are able to take those orders, and OpenNMS insures that our network is running at 100%”.

When asked why he didn’t publicly disclose his company’s use of OpenNMS, Rodman told us, “Well, quite frankly we’ve never been asked. I suppose it could be done, but we’d have to get approval from the higher ups and it’s just more of a hassle. You know, it’s kinda nice that they don’t brag about us on their website, etc. because it makes us feel more like a partner than some kind of ‘show dog’ to be trotted out and displayed. Also, we’re not sure we want to be associated with that Balog guy. Have you ever seen him play charades?”

It seems that OpenNMS has at least one loyal user, and this reporter can only wonder how successful the project could be without its somewhat eccentric administrator. In any case, it is a project to keep an eye on, but be ready to quickly look away.