David messaged me yesterday that Dougie Stevenson had died.

I hadn’t seen Dougie in person in a long time, but I’d kept up with him through the very networks he, in part, helped manage. While I had heard he wasn’t in the best of health, the news of his passing hit me harder than I expected.

I can’t remember the first time I met Dougie. I do remember it was always Dougie, rarely Doug and never Douglas. While most adults might drop such a nickname, it is a reflection on his almost childlike friendliness and good nature that he kept it. I do know that I was working at a company called Strategic Technologies at the time, so this would be the mid-1990s. I was working with tools like HP OpenView, and I’d often run into Dougie at OpenView Forum events. When he decided to take a job at Predictive Systems I followed him, even though it meant commuting to DC four to five days a week.

It was at Predictive that I got to see his genius at work. With his unassuming nature and down-to-earth mannerisms it was easy to miss the mind behind them, but when it came to seriously thinking about the problems of managing networks there were few who could match his penchant for great ideas. I used to refer to him as the “Elvis” of network management.

We were both commuters then. While he had lived in many places, he called Texas home as much as I do North Carolina. We were working on a large project for Qwest near the Ballston metro stop, and after work we’d often visit the nearby Pizzeria Uno. The wait staff loved to see Dougie, and would always laugh when he referred to the cheese quesadillas appetizer as “queasy-dillies”. This was back during the first Internet bubble, around 1999, and while many of us were working hard to make our fortune, Dougie never really cared that much for money. He used to joke it would all go to his ex-wives anyway. I know he had been married but we didn’t talk too much about that aspect of his life. He’d much rather talk about the hotrod pickup truck he was always working on when he had the time. I do remember he once walked away from a small fortune over principles – that was just the kind of person he was.

I can’t remember the last time I saw Dougie, but it could have been in Austin back in 2008. I have this really bad picture I took then: 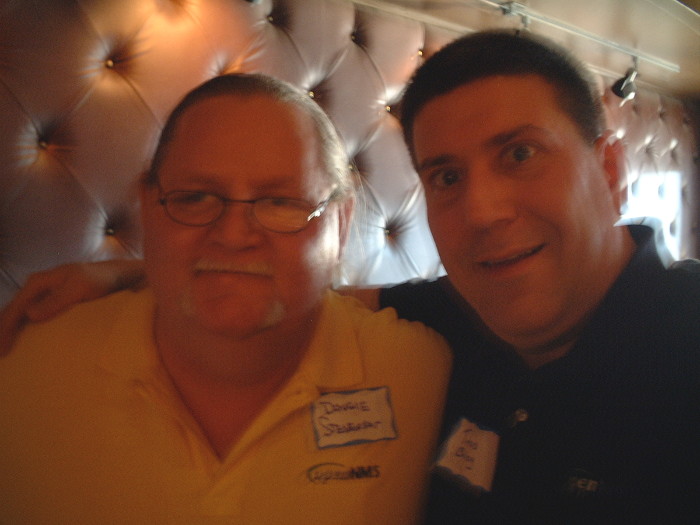 Notice he has on his OpenNMS shirt. He never failed to promote our efforts to create a truly free and open source network management platform whenever he could.

As I’ve gotten older, I wish more for time than money. Between the business and the farm I’m kept so busy that I rarely get to spend as much time with the amazing people I know, and it would have been nice to see Dougie at least once more. In any case, a small part of him lives on in the hearts and minds of those who did know him.

Though it saddens me to say it, Elvis has left the building.