Their choice for music player used to be Banshee. I really liked Banshee – it reminded me of the early versions of iTunes before that application became too complex. Unfortunately, Banshee is no longer under active development, and the last release was back in 2014.

As the underlying libraries have changed and matured, Banshee has not kept up. For example, if I plugged in my handy Banshee would hang if the MTP mount was being accessed elsewhere. Mint recently decided to switch to Rhythmbox, and I’ve finally made the decision to start using it.

One of the things I’ve learned about open source is to be patient learning a new app. The reason there are often numerous open source solutions for various tasks is that people do things differently, and it can take awhile to understand how a particular application is designed to work. I’ve found that many features I thought were lacking in Rhythmbox were there, just implemented differently than I expected. If the feature is, indeed, missing, you can often add it with a plugin.

I’ve recently been exposed to the music of Imogene Heap, starting with her album Sparks. I really like the sixth track “Lifeline” and I wanted to listen to it a couple of times on repeat. There is a repeat button on the menu, so I clicked it, but that just repeats the playlist. In other apps you can click that icon multiple times and it will rotate through various options: i.e. repeat playlist, repeat song, etc. Not so with Rhythmbox.

A quick search and I found a plugin hosted on Github to add this feature. I downloaded the repository, unzipped the file, and then copied it to ~/.local/share/rhythmbox/plugins/. I then went to Tools -> Plugins and enabled “Repeat One Song” (no restart of the app needed). Now, under the Edit menu, I have the option to repeat the current song. 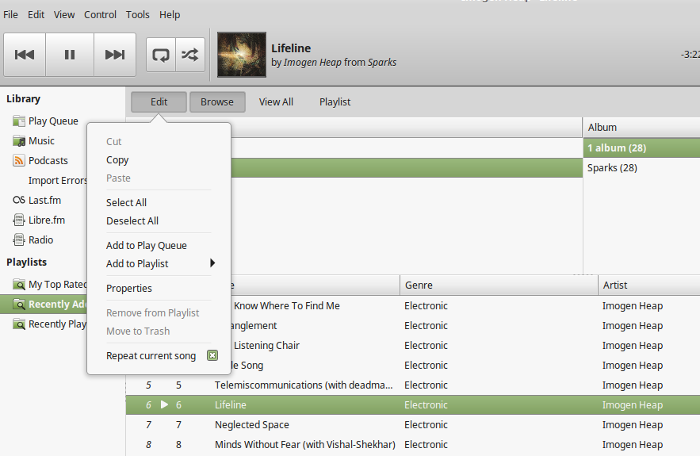 Not quite as nice or intuitive as clicking on a button, but it works.

While I see this as a great example of the awesomeness of open source, it also brought out the downside of free software. There was this comment:

This should not be a plugin.. It should be there by default if rhythmbox wants to call itself a music player.

Seriously? A bunch of people write a complex piece of software, give it away for free, build in a way to extend it, but no, that’s not enough. This guy isn’t satisfied that these folks didn’t cater to his every need, even though edumucelli has gone to the trouble to add it.

Free software isn’t a free solution, and I just wanted to post this to remind people, including myself, that often it takes an investment of time to really get to understand how an application works.

In open source, often our first goal is to make something that works before we make something that is easy to use. I’m not proud of this, but quite frequently the motivation behind the developers of free software is to solve a problem important to them and it just happens to be useful to others. And even companies that focus heavily on UI and try to build intuitive interfaces can get it wrong. I’ve had to work with recent versions of iTunes and find it rather difficult to do simple things, although I’m certain that if I used it more I would learn what I needed to do, just like I have with Rhythmbox.

Which I’ve grown to like. It works well with my mobile device and I’m eager to watch it improve even more in the future.