Recently, I was talking to a person in the tech industry and describing all of the cool things we are doing with OpenNMS, when he kind of cut me off and went “Oh, monitoring? Meh.”

Well, I can’t remember if there was an actual “meh” but that’s how it came across, and I’m afraid the reaction is probably more common that I would think. Monitoring isn’t sexy, but it surprises me that people can’t see how critical it will be to the future of any business. 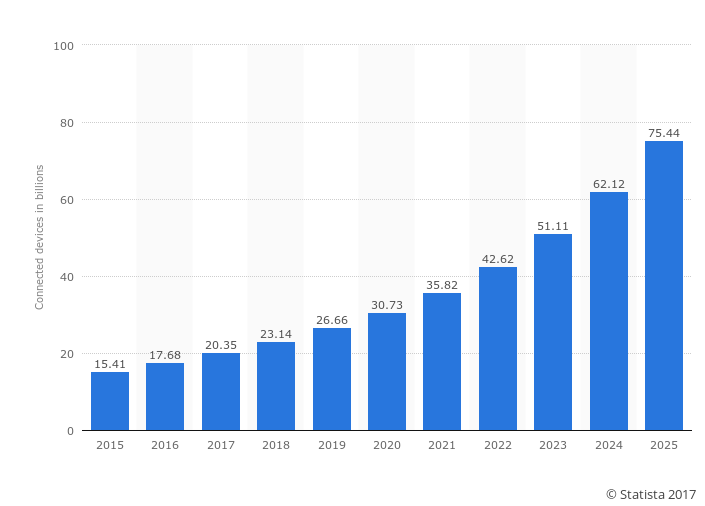 While forecasts vary, by 2020 there are expected to be over 30 billion devices on the Internet, and that figure will skyrocket to over 75 billion by 2025. Just knowing what is connected to your business network is going to become critical, as well as making sure it belongs there in the first place and, if so, is functioning properly.

Outside of the obvious security concerns, as people began to transact business more and more through devices rather than people, faults in those devices will directly impact revenue as people search for other options when faced with a bad experience.

Here are a couple of examples.

One of the greatest inventions in my lifetime is the ability to buy fuel at the pump. You just pull up, swipe your card, pump and then leave. You used to have to pay inside, and some places made you pay first which meant two trips in if you were paying by credit card. It could be cold or rainy, and not only did you have to wait in line behind people buying food or lottery tickets, you had to leave your car out by the pump possibly blocking the next customer.

The only problem I’ve experienced with this process concerns the receipt. Quite frequently I need a receipt, but it seems the pumps I choose are always out of paper. The little red indicator mark when the paper roll is almost finished isn’t visible to the cashier since there really isn’t one out by the pump. It is frustrating, but it is not like I have a choice at the moment. If there was some way to monitor the pump for a “low paper” alarm, it would improve my shopping experience.

One shopping experience that did result in my leaving the store without a purchase happened yesterday at a Lowe’s Home Improvement store. I needed some florescent lights for the new office so I went by on my way home. I picked up four bulbs (two that I needed and two spares) and went to the checkout area.

I walked past several unmanned cash registers until I got to the “Self Checkout” section, which was the only thing open. Of the four machines, two had red blinking lights on them (that are green when things are functioning normally) and the one lone, overworked cashier was doing her best to help people out. I usually don’t mind using Self Checkout and when I noticed one of the two machines was open (everyone else was waiting for the attention of the lone cashier) I went to it and started my purchase.

I scanned my “My Lowe’s” card and then the first bulb. “Eight ninety-five” piped up the voice and I placed it in a bag.

Here is where the problems started. First, I hate the fact that with these Self Checkout kiosks they don’t trust you to use a “quantity” key. I was buying four identical items but I was required to scan each one. Next, the bulb was light enough that it didn’t register as having been bagged, so the interface yelled at me and presented me with a button marked “Skip Bagging Item?”.

I sighed and, having no other option, hit the button. I then went on to scan the next three bulbs. However, as I bagged the fourth bulb, the scale must have started working since the whole unit went into some kind of alarm mode, screeching “Unidentified Object in the Bagging Area!” and the screen was locked until the cashier had time to come and fix it.

I looked around the area, and by this time all four kiosks had a flashing red light, there were at least three shoppers lined up to use them in addition to those of us already there, and our valiant cashier was busy helping a guy ring up his plumbing supply purchase which consisted of a ton of small copper fittings which most likely wouldn’t be registered by the scale.

I gave up. I picked up my bulbs and returned them to the Lighting section, passing three employees in the customer service area helping zero customers. Before I reached the car I’d ordered the same bulbs on Amazon at a fraction of the price, and they’ll be here on Friday.

Yes, I’m complaining, but how could monitoring have helped here? First, there is some sort of monitoring – those little red lights. When they all light up you would assume someone, or perhaps multiple someones, would come by to help. A monitoring system could have made sure that happened by using an additional notification system outside of the lights, and escalating it until the problem was addressed.

A more long term solution would be to collect information on the purchasing experience and the problems people encountered and to make changes to the automated kiosk software. I’m certain that Lowe’s didn’t write that software but instead bought it, and like most proprietary software solutions they now have to fit their processes to the application instead of the other way around. It probably wasn’t designed for a store that sells a lot of small, light things which is central to the issues I have using it.

With the rise of IoT devices, robotics and other forms of automation, monitoring is going to become extremely important. Lowe’s lost out on a $40 sale, but think of something like an assembly line where a problem could result in the loss of thousands of dollars a minute. Our goal at OpenNMS is to be ready for it, and to build products that make people go “Monitoring? Oh yeah!”.