Way back in 2006 I was invited to be on one of the first FLOSS Weekly shows. That was when it was hosted by Chris Dibona and Leo Laporte. Now it is run by the very capable Randal Swartz, and I was excited to be invited back, ten years later. It was also fun to meet Jonathan Bennett, his co-host, for the first time.

Jeff Gehlbach joined me to chat about OpenNMS and all things FLOSS, and I even thought he got a word or two in edgewise. Like FLOSS Weekly, I think our major achievement is that we are still here and still going strong (grin). The only complaint I could have is that this was episode 418 and I was originally on episode 15 so it would have been cooler to be on three shows ago to make it an even 400, but I’m OCD like that. 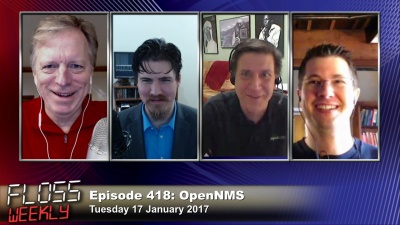 One thing I love about free (libre) and open source software is that it is self-selecting. People choose to use it, and thus there tend to be certain things we all hold in common that makes meeting others involved in FLOSS like immediately making a new friend. Chatting with Randal and Jonathan was more like catching up with old friends, although I’d never talked with them before. I look forward to this as the beginning of a beautiful friendship.

Anyone who has had the misfortune of listening to me drone on about OpenNMS in the past will here a number of “bingo” stories in this show, but we do touch on some new ideas and I think it went really well. Please check it out and let me know what you think.

One thought on “OpenNMS Is Once Again on FLOSS Weekly”