Okay, so I’ve been slack at getting this review out, since by now they’ve already had the planning meeting for next week’s show. As they mention at the start of this one, both Jeremy and Jono were unavailable for the last planning meeting so Stuart and Bryan ran with it. It was a good show, but it kind of demonstrates that, like many of us, the guys are very busy and sometimes you just have to soldier on, which I think is a great set up for the quality of this blog post.

I’ve been traveling a lot and I’m about to head out again, in part, to attend two great open source conferences in Europe, but last week found me in Rochester, NY which was an easy drive to Buffalo, where I met up with a recovering Jeremy Garcia. 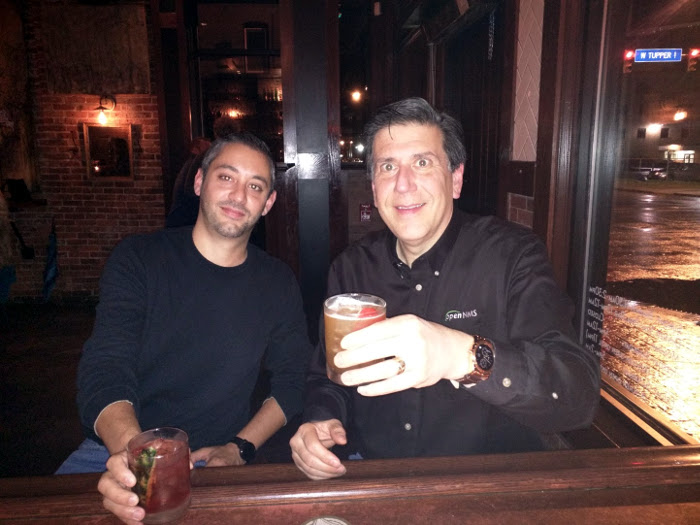 Due to my fascination with classic cocktails, we ended up at Buffalo Proper, where it turns out they make great drinks. This was right after the taping of the show, so I heard a bit about it from Jeremy and then listened to it on the plane ride back home.

The first segment talks about all the new cool open source computing devices out there, and if they are just for über geeks or will they ever appeal to the masses. I love reading about all the new toys that are available, but unfortunately I’m so busy that I can’t ever find time to play with them. I bought a Raspberry Pi when it first came out, but after it sat on a shelf for six months I gave it away to someone who might actually have time to use it. It took me forever to get around to making an OpenElec/Kodi PVR and without a specific need it is hard for me to find time to just play. I think these things will become more popular, but it will take time as young people (who tend to have more free time) discover them and start coming up with ways to use them.

Think about Lego. When they just made generic sets of bricks, they were a well known company but not very large. Then they started making sets to build specific things, and the brand took off. We’re are the “generic brick” stage now, but I expect something to come along that will create a huge increase in what things you do with these devices.

I am often jealous of today’s youth. Back when I was in school we didn’t have the Internet, per se, but we did have access to a number of dial up services. I used to call into BBS systems a lot (mainly running WWIV) and even figured out how to dial in to the campus network and access the VAX (which was connected to the Internet). There I could use “talk” to communicate with friends. Now, kids today have access to orders of magnitude more information and more toys. Unfortunately, that comes with the risk of “cyber-bullying” and other problems, but still, for those so motivated the benefits outweigh those risks.

I was surprised they didn’t talk about the ruling by the Librarian of Congress that made it (more) legal to tinker with technology you buy, which I think is a great step toward opening up tinkering at all levels.

The next segment discussed “vigilante malware” which uses the same exploits as regular malware but does it in order to make things less vulnerable to attack. Is this a good thing? The guys all agreeded that having someone change things on your devices with out your permission was “bad”, but they differed on the level of bad. I take a different approach. I work hard to keep my equipment up to date, so my assumption is that I wouldn’t be affected. However, many geeks and most muggles aren’t so aggressive, and so they get owned. This results in things like my mailbox being hit by spam (I get around 150 spam messages a day – most caught and processed by our mail server). This wouldn’t happen if people were more careful, as most spam originates from infected PCs, so I’m all for vigilante malware. Think about it – malware isn’t going away so why not encourage more of the good kind? Think of it like “good” vs. “bad” cholesterol. The only real solution to both is better security practices and better code, and both types of malware are incentives.

Anyway, the third segment talked about the Owncloud application. I’ve been meaning to play with this for some time (see “no time to play” above) as it looks cool. Take all of the nice features of “cloudy” things like Dropbox, and put them on a server you control. I think this is a fine goal. Plus, Owncloud also includes calendaring and contact management (apparently). We currently use Sogo for that, but it would be neat to integrate that with other things.

The only thing that wasn’t clear to me was the business model. The founder Frank Karlitschek states that Owncloud is not “open core” (or as we like to call it “fauxpensource“) but I’m not clear on their “enterprise” vs. “community” features. My gut tells me that they are on the side of good. I can see having a different license for an “enterprise” feature such as Sharepoint integration, especially if Owncloud has to use a proprietary library in order to get it to work at all, and it doesn’t look like the “server” version is intentionally hamstrung in order to get more business. Only finding the time to play with it will let me know for sure.

The final segment concerned laws about open source. The thesis is that the open source community spends a lot of effort working against laws that limit open source, so why shouldn’t the proprietary software world have to fight against laws that would make open source the norm? From the example above, the Software Freedom Conservancy spent a lot of effort to get the Librarian of Congress to make an exception to allow you to examine the software in various devices you own – why shouldn’t other companies have to fight to keep their code closed?

I think the team got this one right – money. Proprietary software companies get an immediate financial gain when their lobbying efforts pay off, but it doesn’t work for free software. However, I am seeing in these days of cost cutting that there is a movement in some governments to promote open source, so I think it is more of a question of true education than lobbying. One of the issues is that it gets confusing when companies like Owncloud offer an “enterprise” version and it isn’t clear what that means. While it might be 99% open source, all a detractor has to do is say “look, Senator, you have to pay just like you do for our stuff, and you know our stuff”.

Overall, decent episode. I get a mention in the outro as Jono refers to Todd Lewis, one of the people behind the All Things Open conference, as the “Nicest Man in Open Source”. I once held that title, but I would happily cede it to Todd. He is a truly nice guy, and is always willing to give you a hug. I used hug too, until that time I hugged Jono in Munich and what happened next had to be explained to my therapist with dolls.