Several years ago we did a lot of work in Sweden (Hi, Lasse!), and that is where I first saw some really nice standing desks. The first standing desk I ever saw was when I worked at Northern Telecom and it was for an employee who needed one due to health reasons, but it was fixed in place. The ones they had in Sweden (from IKEA, ‘natch) had a little switch that you could use to raise and lower it as needed, and they had places to mount a PC and run cables so they wouldn’t get snagged when it moved.

When I looked for them for the office, I was shocked by the price. A decent one with options pushed $900 and they could go north of $2000 fully loaded. While I’ve read a lot about the health benefits of standing I just couldn’t afford to get such a desk.

Recently I was on an American Airlines flight, and I just happened to see a small ad for something called a Varidesk in the in-flight magazine (and I’ve never bought something from the back of an in-flight magazine). This was something you put on an existing desk and you could use it to lift a monitor, keyboard, etc. to a standing height. It was manual, but it was considerably less than a dedicated desk.

Now, being the CEO of a profitable company it is required that I have the huge executive desk, so I do. Of course, mine was free from a business that was moving offices and all I had to do was go get it, and then repair all of the broken bits so I could put it back together. My monitor sits in one corner of this monstrosity, and I was happy to see Varidesk made a product that would fit perfectly. 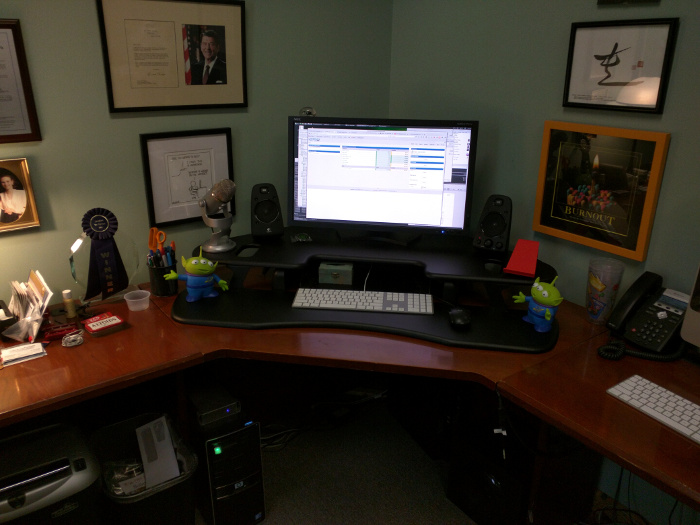 First off, the sucker’s heavy. It cost a lot to ship due to its weight, but that translates to a lot of stability when raised. The unit I bought had a shelf for the monitor, speakers, etc., with a lower shelf for the keyboard.

In the upper shelf you will notice two holes. You place your hands through them to release levers which will allow you to raise the desk. It does take strength to get it started, but then it is balanced so that it becomes easier.

(Note: the little green light on my PC is my OpenNMS Blink notification) 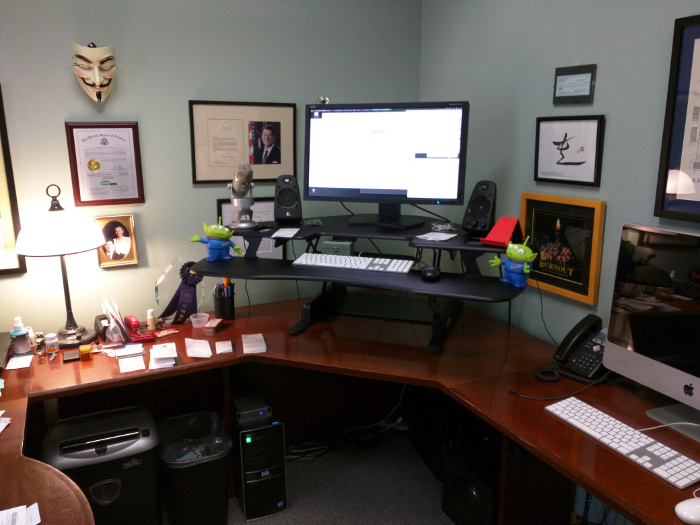 I love that everything comes up with it: the speakers, the monitor, the keyboard, my Yeti mic, etc. It will also go fairly high – I’m a little over six feet tall and I can get it high enough that I’m comfortable using it. It isn’t perfectly stable, if you are energetically pounding on the keyboard it will move slightly, but it is easy to get use to it. I did have to get some USB cable extenders to make sure things like my camera didn’t go flying off when I raised the desk, but outside of that it pretty much worked out of the box.

And, yes, when standing I like to crank the tunes and dance. You do not want to see me dance.

The Varidesk is well built and I did find myself using it, so some of the other guys in the office were interested. They don’t have fancy executive desks, so I got a slightly cheaper model that fit theirs better. 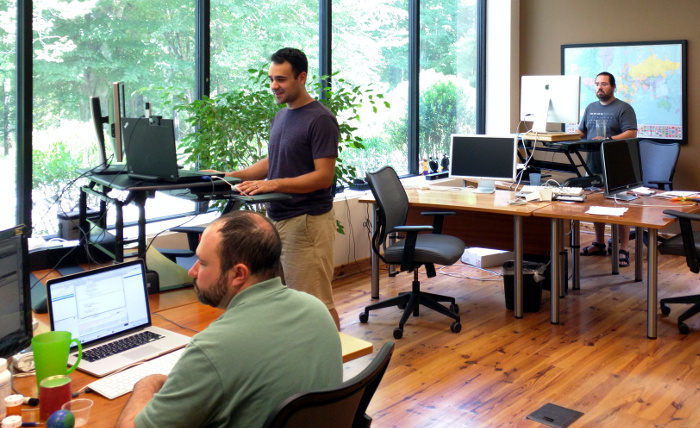 We bought three more and everyone seems to enjoy them, although we probably don’t use them as much as we should. Because they are stylish and convertible, even in the down position they look good.

I found that after about an hour of standing my legs started to hurt. Our office, like many, is pretty much industrial carpet over concrete. There is little padding, so I bought a pad on Amazon that works well for me and I can dance longer.

It’s also cool to elevate the laptop for our daily scrum call: 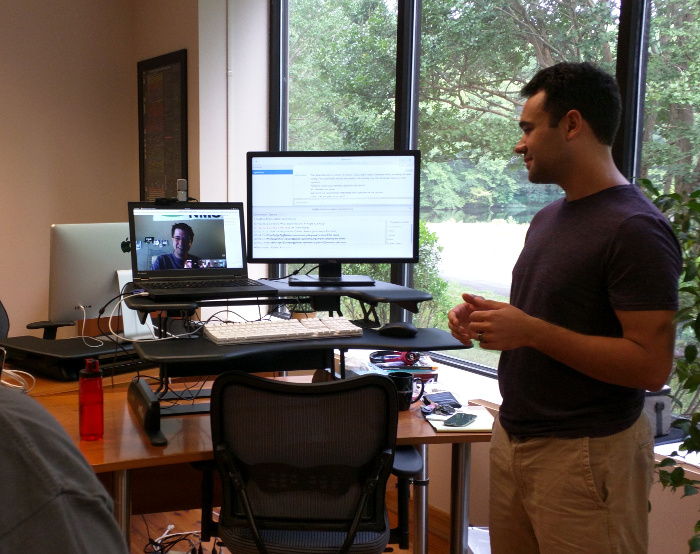 So, if you are thinking about getting a standing desk but already own a desk, consider the Varidesk. While it isn’t the cheapest thing out there, it is well made and will give you experience to see if you even like working standing up, which would be considerably cheaper than buying a new desk and finding you didn’t like it.