Hey. Lots to catch up on in this post, but the TL;DR is that the OpenNMS Group is hosting a free concert to coincide with this year’s OSCON conference in Portland.

It will be held Thursday night, July 23rd, at Dante’s, which Google Maps describes as a “Hip, dungeonlike rock venue”. 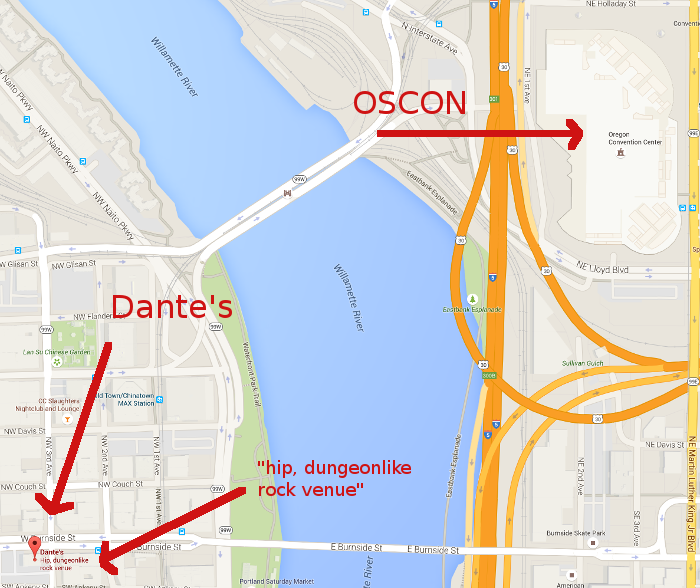 The Concert (note how I capitalize it because it is just that epic) will feature MC Frontalot along with his band. This will be the first time I’ve ever gotten to see a Front show with the band (thus “epic”) and I’m really looking forward to it.

And just to throw a little whipped cream and a cherry on top of this huge nerdy/geeky sundae, the opening act will be the Doubleclicks. Yes, you read that right, Angela and Aubrey will be there bringing their unique brand of nerd-folk to the same stage as the man who invented nerdcore rap.

And did I mention it is free? Doors open at 8pm, show starts a little after 9pm.

Plus, for you free and open source software fans, there might be a little extra surprise. Be there to find out what it could be.

Now, the long version on how this all came about.

Chris Dibona once said that his job was to give money to his friends. While our budget here at OpenNMS doesn’t come close to his, I did take his words to heart and we strive at all times to support the FOSS community.

I consider part of that community to be the Electronic Frontier Foundation (EFF). If it wasn’t for the EFF defending a free and open Internet, open source would have a much harder time existing. Usually we give a fairly large donation at the end of each year to support them.

Last year I didn’t. To be honest, 2014 kind of sucked for me for a variety of reasons, and we really weren’t doing well enough to support a donation.

A few months ago I got introduced to Chad Essley. He is the animator behind the MC Frontalot video for the song “Shudders”. While I had yet to meet him, he shared my love of the EFF’s work and decided to auction off some of the artwork from that video and to donate the proceeds. The “grand prize”, if you will, was to have a special remix of “Shudders” made to include some new artwork. Since 2015 is going much better than last year, we decided to bid on that prize and we won, so now I can present the new and improved “Shudders”, which includes everyone’s favorite kiwi, Ulf.

Note that about 1:25 minutes in you can see a pretty accurate rendition of the OpenNMS headquarters.

Anyway, I really enjoyed working with Chad, and I found out he lives in Portland, Oregon. Portland is also the usual venue for the O’Reilly Open Source Conference (OSCON). While OSCON has definitely become much more focused on the latest Valley fads over FOSS, it is still the one place I can be sure to see all of my FOSSy friends each year, so I never miss a chance to go. Now I can add Chad to the list of people I get to see.

Then it dawned on me – why don’t we do a little guerrilla marketing and host a show? Thus after all the swag laden Docker parties are over, people can come by and enjoy some geek-centric music in a cool place.

So I approached Frontalot about doing a concert and, again, since we’re doing better this year, I felt we could spring for the whole band. He agreed, and then used his powers of persuasion to get the Doubleclicks on board. Dante’s is also helping us out, so be sure to come out and buy lots of beer in appreciation.

If you are new to the Doubleclicks, as I was, this is one of my favorite songs of theirs:

The show is open to everyone, so you don’t need an OSCON pass to attend. But I’ll be wandering around the OSCON Expo floor handing out some goodies that are just for conference attendees. I’ll post more when it gets closer to the date, and I’ll tell you how to find me.

I am extremely excited that we are able to do this. It promises to be a great time.