It was fifteen years ago today that the OpenNMS Project was registered on Sourceforge. 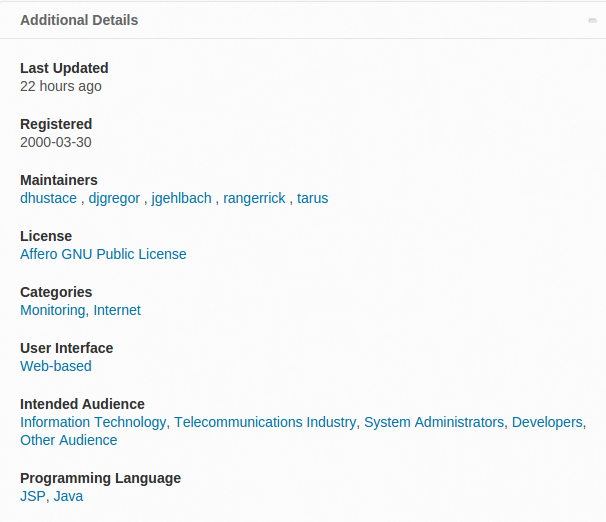 The project itself was started sometime in 1999, but I wasn’t around then as I didn’t get involved until 2001. I’ve been told that it started in July of that year, but since an open source project really doesn’t exist until something gets shared, it seems that March 30, 2000, is as good a day as any to mark the birth of OpenNMS.

I went poking around on the site and wasn’t able to find the very first thing posted there. I believe it was a mockup of an administration console using the Java Swing toolkit that never actually made it into the product. While I believe the code is still in there somewhere, in switching from CVS to SVN to git, dates do get a little corrupted and I couldn’t find it.

Anniversaries don’t really mean that much in practical terms. In moving from Sunday, March 29th, to Monday, March 30th there was no substantial change in OpenNMS at all. But it does lend itself to a bit of reflection, and fifteen years is a lot of time on which to reflect.

While I have been working on OpenNMS most of my professional career, I didn’t start it. People much smarter than me did, and that has pretty much been the story of my life. My only true talent is getting intelligent and creative people to work with me, and the rest of my career is just basking in their reflected glory. In 2002, the original founders decided to stop working on the project, but I saw its potential and was able to become its maintainer.

My original plan was to simply remain a company of one and provide consulting services around OpenNMS. That didn’t work out so well, as I soon realized that it could be much bigger than one person. In September of 2004, The OpenNMS Group was born in part to insure that the OpenNMS platform would always be around. We wanted to build something amazing, and this was reflected in our goal “to make OpenNMS the de facto management platform of choice.”

Being pretty much a group of technical people, we didn’t know we were doing things wrong. For a business plan we chose “Spend less money than you earn.” For a mission statement we liked “Help Customers – Have Fun – Make Money”. I put forth my two desires that OpenNMS should never suck and that OpenNMS should always be free software. We just took it from there.

This is not to say that we haven’t met with frustration. Gartner likes to diagram companies on two axes: “Vision” and “Ability to Execute that Vision”. We have a lot of vision, but our business model doesn’t give us a lot of resources to execute that vision quickly.

In order to change this, I spent a lot of time in Silicon Valley looking for an investor. Silicon Valley is pretty much the center of the technology industry, and one would assume that they would know the best way to run a technology based business. But I was pretty much told that you can’t be anyone unless you work in the Valley, you’re too old, and most importantly, you are doing it wrong.

There seems to be a formula they like out there. You raise a bunch of money. You hire as many people as fast as you can. You get as many users as possible and you hope that some larger company will buy you out. They call this an “exit strategy”, and this is supposed to be the focus of the business. Once you “exit” you can do it all again.

The problem, as I see it, is that a lot of companies have to exit before they get bought out. They run out of money, the investors run out of interest or patience, and then they just shutter the endeavor. Sure, you have your prominent billion dollar acquisitions, but in the scheme of things they are a very, very small percentage.

Plus, I’m already doing what I love to do. I really don’t want to do anything else. My chosen field, network management, is huge and I can always find something interesting in it, such as figuring out the best way to deal with the Internet of Things.

Sure, I believe that there are companies out there that would complement what we do. Ones that have the capital to help OpenNMS grow in a way that doesn’t go against our corporate culture. And while our involvement with such a company would probably be through an acquisition, I don’t see that as much as an “exit” as an evolution. I wouldn’t do the deal if I didn’t think I’d want to continue to work on the project, so I wouldn’t be going anywhere.

I see this post has become more about the business side of OpenNMS than the project itself, but I felt it was important to think about how our business philosophy permeates the project. Thus I thought it was serendipitous that Ben sent me a link to an article about an alternative to the “exit strategy” called the “exist strategy”.

The Nishiyama Onsen Keiunkan is the world’s oldest business. It is a hot springs hotel in Japan that was founded in 705 and has been run by fifty-two generations of the same family. They have survived and even thrived for 1300+ years by having a relentless focus on their customers. Even though they have only 40 rooms, by any measure you have to call their undertaking a success.

I think there is a huge problem with the tech industry’s focus on the exit. It’s such a short term goal. I expect the goal we set for OpenNMS to take the rest of my life and maybe some time after that. By focusing on an exit the people who usually end up paying for it are your customers, and that just doesn’t strike me as a way to run a business. I’m certain that if the Nishiyama Onsen Keiunkan had focused on growth over service they would have died out a long time ago. Heck, even the company that started OpenNMS closed its doors in 2004. When they weren’t moving fast enough toward their goal for the investors, the did what today we would call “a pivot” and it didn’t work out, even thought that’s what anyone in the Valley would have said was the right decision.

Look, I don’t want to come across as some sort of holier than thou “money is evil” kind of person. I run a business, not a charity. But as a businessman, and not a gambler, I truly believe that our best chance at financial success is to find a way for us deliver the best value we can to our customers. Period. That’s our focus, and any type of “exit” is way down on the list. Heck, the current management team at The OpenNMS Group is ten years older than the rest of the guys, and we’ve even thought of selling the business to them when we wish to retire. Not sure we can do it 52 times, but that is one form of exit that is still in line with an “exist strategy”.

And that’s the thought I want to take into the next fifteen years of OpenNMS. We have a covenant with our users and they have paid us back in kind with their support. This has resulted in a number of other impressive numbers. The OpenNMS Group has prospered for more than a decade. We are getting ready for our tenth OpenNMS Developers Conference, Dev-Jam. We’ve had almost the same number of OpenNMS User Conferences, the next one is in September and hosted by the independent OpenNMS Foundation.

We still have quite a few years to go to match the numbers of the Nishiyama Onsen Keiunkan, but I think that focusing on an “exist strategy” is the way to go. We still have the greatest team of people ever assembled to work on a software project, and while the faces and names have changed over the years, I still feel like I’m standing on the shoulders of giants.

And the view is great from up here.

One thought on “OpenNMS at Fifteen”