The network management application space is rather cluttered, with a number of “fauxpensource” offerings that can really confuse the landscape when people are looking for truly open solutions.

Two exceptions to that are OpenNMS (‘natch) and Zabbix.

According to the Wikipedia article, Zabbix was started in 1998, which makes it a little older than OpenNMS, which I’m told was started in July of 1999 although we use March 29th, 2000, as the official “birth date” since that’s when the project was registered on Sourceforge.

Despite being in the same space and about the same age, I’d never really used Zabbix or interacted with their community until 2009 when I met Rihards Olups.

Rihards is kind of “the Mouth of Zabbix” and I met him at the 2009 Open Source Monitoring Conference where he brought me some gifts from his home in Lativa. He repeated the gesture at this year’s OSMC, and I asked when would be his next trip to the US so I could return the favor. He pulled out his handy and said “Are you anywhere near Raleigh, North Carolina?”

Since that happens to be pretty much my home I was happy to find out that he was coming to town. Even though he was sick with the flu that had been going around, we managed to get a gang together for dinner. 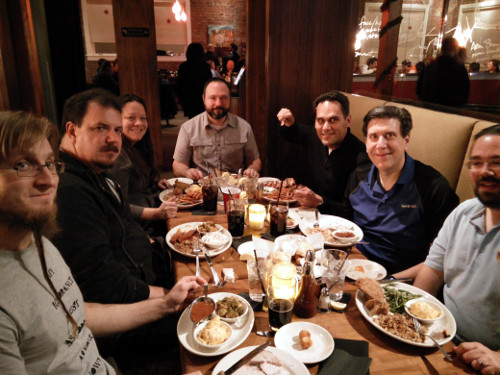 Left to right, that’s Rihards (with the awesome beard), Eric (who was in town from Texas), Sarah, Seth, David, Me, and Ben.

We went to The Pit, which is an acceptable, local barbecue restaurant that is much more “presentable” than some of my favorite dives although the food isn’t quite as good, and then afterward we went next door to the “barcade” and played games.

I played pinball (one of my favorite things to do) and Rihards played his first game on a real pinball machine. Yes, I’m a bit older than him.

One of the things I like about my job is that I can go most anyplace and find like-minded free software people. It’s awesome and I always have a good time. I hope to visit Riga in September around the time of the OpenNMS Users Conference and meet more.