I’m in Germany for the always excellent Open Source Monitoring Conference (review coming) and I wanted to have data for my mobile phone. At the airport we stopped at a Relay store and bought an Ortel SIM card for 20 euros (well, €19.90). Since Ronny was with me I just let him activate the card (the process was mainly in German) and we got on the train to Nürnberg.

During the two hour trip I must have exhausted the small amount of default data that came with it, and thus began an odyssey that took over 24 hours to get resolved.

First we tried to go to the “Mein Ortel” site, but it was down.

Then, we downloaded the “Mein Ortel” app from Google Play. It loaded but we could never authenticate. 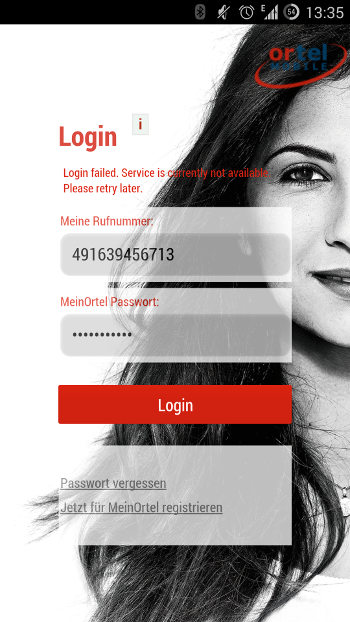 This lasted for hours.

After we had arrived at the hotel, we noticed that the website, at least, had become available. But at any point when we tried to purchase more time we’d get still another error. 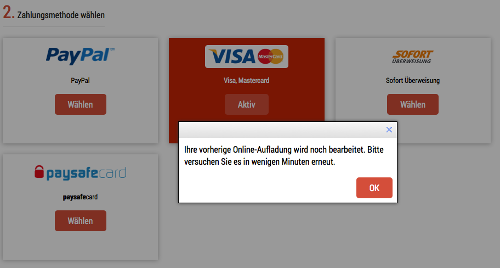 They do have a customer service number, but they charge €0.49 per minute to use it. In desperation we called it but they had closed for the day, so there was no resolution to be had on the first night.

The next day we tried, unsuccessfully, to get the web site and the app to work. Finally Ronny called, was put on hold (!) and then told that they were having issues with their payment system. Why a total lack in the ability to accept payments would require so much time to determine that you would have to be put on hold is beyond me, but my guess is that Ortel just wanted to ratchet up a few more euros from me.

At lunch we went in search of another provider. We found a Base store that sold Ortel and Blau SIMs, but we were told that Blau may take up to 24 hours to activate. We then found a Vodafone store but they wanted €45 for a SIM. In the end, we decided to buy an Ortel voucher (the SIM was activated at least) for €15 and with the help of the lady at the Base store managed to get the credit applied, and I should have service for the reminder of my stay.

My question is: isn’t is fraud to take money for a service and then fail to deliver that service? I’m only here for three days and I was without data on my phone for more than a third of the trip, all due to the fact that Ortel can’t be bothered to implement network management.

I’m doubly surprised that this happened in Germany, since they tend to be more strict on these things than most countries.

Yeah, I know “first world problems”, but as someone who is in this country with nearly 300 other professionals to discuss monitoring it seems like Ortel could benefit from sending some people to this conference. As commercial network-services become even more prevalent and important, I do expect to see the implementation of fines for outages.

Anyway, if you are ever offered the option to get mobile service from Ortel, run the other way.