This is my “oh” face 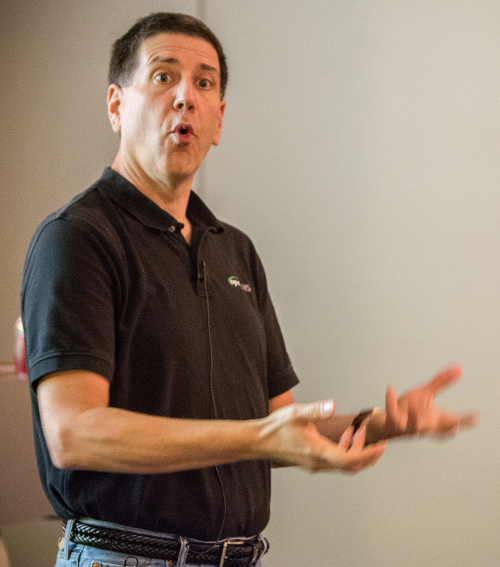 as in “Oh how awesome is All Things Open”.

Last year was the first edition of the All Things Open conference in Raleigh, NC. I was very happy that we could be a sponsor, and the above picture was taken during my talk.

We ended up with about 50% more people than were expected, and the keynotes were standing room only. It was really cool to see such a turnout, especially since it sort of validates the Raleigh area as a center for open source excellence.

This year we will have a booth where you can come by, get some OpenNMS swag, and hear about the pending release of OpenNMS 14 (yes, fourteen) which is only a few days away.

Now, “oh” could also mean “oh-hi-oh” as in the Ohio LinuxFest. Directly after All Things Open, the Ohio LinuxFest will be held in downtown Columbus this weekend. This has been one of my favorite open source conferences, and it looks like this year is going to be no exception.

Unfortunately, I will not be able to make either of those shows due to another commitment. But if you want to see my “oh” face in person, come to the “Oh Ess Em Cee” conference in November.

Last year all three conferences were held the same week, which was very disappointing for me as it was hard to choose which to attend. This year the Open Source Monitoring Conference was pushed out a month and will be held in Nürnberg, Germany, 18-20 November. While mainly thought of as an Icinga and Nagios conference, the organizers have been very inviting of other projects. We have had a presence there for the last couple of years, but I have only personally been once and it was amazing. So many people sign up that they are able to pretty much rent out an entire hotel, so while the conference is always good it is the conversations outside of the presentations that are the most enjoyable.

I’ll be giving a talk on OpenNMS (‘natch) as well as getting up to speed on what else is going on in the monitoring world.

I hope you can make at least one of these shows. You won’t regret it.

2 thoughts on “Conferences? We Got Yer Conferences”