Back in December a friend of mine I met through OpenNMS offered up a Google Glass invite. While I have privacy concerns about the whole thing, I didn’t want to miss the opportunity to play with the technology, so I accepted.

Well, it took awhile, but this week Google got around to offering me the opportunity to become an “Explorer”. After putting in my code, the Glass was added to my Google Wallet shopping cart and soon on its way via overnight shipping to the office. 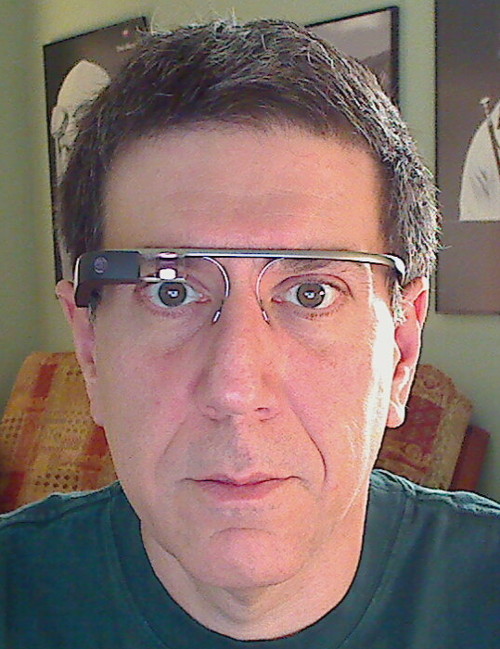 Unfortunately, I ran into a problem right out of the gate. Apparently Glass doesn’t fit my head. While the picture above looks pretty normal, in order to actually see the screen I have to do this: 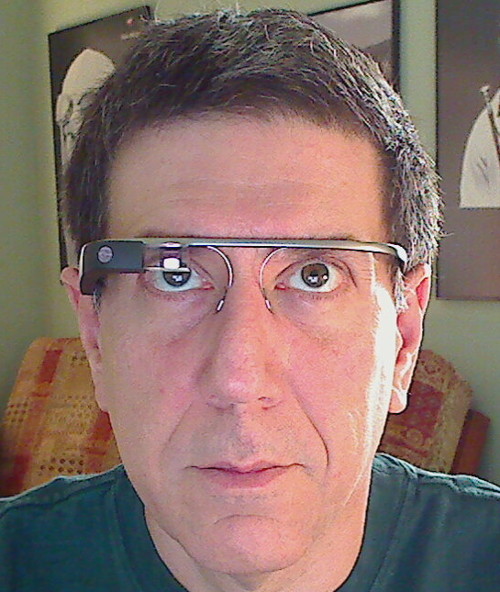 And that is painful. I soon had a vicious headache that stayed with me until I went to bed.

The way the Glass display works is pretty cool. It sits in front on the right eye and consists of an optically clear rectangular solid (made of plastic I believe). I’m going to call it a “cube” for lack of a better word, even though it is twice as wide as it is tall so it isn’t officially one.

The left side of the cube is mirrored, and the LCD is actually located on the right side, perpendicular to the long side of the rectangle. In the middle of the cube, at a 45 degree angle, is some sort of optical material that serves as the actual “display” – light from the LCD on the right passes through it, hits the mirror and then gets diverted toward the user’s eye.

The right earpiece is also a touchpad and you can interact with the device by swiping your finger along it. You pair it via Bluetooth with your phone, and that allows the Glass to have network access, although you can connect it via Wi-Fi as well.

But to be honest I never got to play with many of the features simply because I could not see the damn screen very well. I called the support line to see if there was anything I could do to adjust the screen on the glass downward, much like the “heads up” display on my wife’s car can be adjusted vertically, but unfortunately if you can’t get it to work by adjusting the nose piece you’re out of luck. You can rotate the display slightly left to right, but that wasn’t my problem.

The return process seems pretty easy. I called Google and they are sending me a box and shipping label. Once they get it and confirm it is not damaged, they will refund my money (and considering that the only thing I took out of the box was the Glass itself I’m not expecting any problems).

To say I’m disappointed is an understatement. If the display could just be a little lower in my line of sight I would have experimented with it a great deal. I’ve even taken it out of the box no less than three times during the writing of this post to see if some adjustment would give me some relief, but all I got was a headache.

I hope the return box shows up soon so I’ll quit trying to play with it.