As I was drifting off to sleep last night, a thought came to me:

Why don’t we have E911 apps for our smartphones?

I started my professional career at Northern Telecom (later called NORTEL) and in one of my roles I worked on Enhanced 911 software.

For those readers outside of the US, 911 is the emergency services phone number. It is supposed to be a single number people can call in order to reach fire, police or medical assistance. It’s similar to 999, 112, or 000 in other countries.

Back then everything was focused on land lines, and so the workflow was pretty simple. The phone switch would deliver the caller’s phone number (ANI) to a Public Safety Answering Point (PSAP). There, an operator would take the call, and if everything went correctly, information on the caller would be automatically loaded into the system. The operator would be able to see the caller’s address, and “soft buttons” would be loaded with numbers reflecting the closest police department, fire station or medical services.

For example, if the caller requested help with a fire, the operator would just push the “fire” soft button and the call would be transfered to the closest fire department to the caller.

This is a bit of an oversimplification, but the main point is that it was all tied to the caller’s location, which was static. I left before they started to seriously attack the issue of 911 calls from mobile devices, and the focus was switching from the caller’s phone number to the location of the equipment (e.g. the tower) that was handling the call, but pretty much the system has changed very little since the 911 service was introduced.

As my synapses were randomly firing as I was trying to sleep, I thought about what would happen if I had to call emergency services from an unfamiliar location?

Back in August, my wife and I were almost in a traffic accident. We were driving on the highway while it was lightly raining, and a white Ford Ranger that was trying to merge lost control. It crossed in front of an older model Escalade, clipping it in the left front fender, which caused the truck to spin 180 degrees, cross four lanes of traffic and slam into the concrete lane divider. It missed our car by feet, and only my spouse’s amazing driving skills kept our car from being hit (as the passenger I went all NASCAR pit crew with “go low! go low!” but I am not sure it helped much). 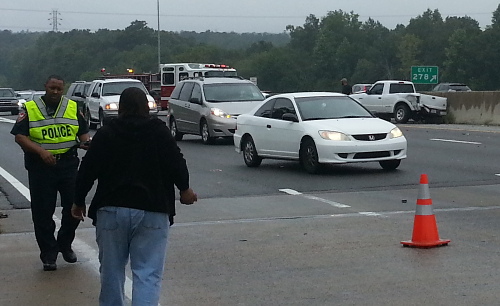 Out of 20+ cars that must have witnessed the accident, we were the only one to stop (well, besides the truck and the Escalade). I called 911 and was able to report our exact location (“heading eastbound on I-40 at the Hwy 55 exit – exit 278”) since I used to work near there, but what if I wasn’t familiar with the area? What if I was in a different country?

Considering the proliferation of smartphones (or as I prefer to call them, handys) wouldn’t it be much simpler if I could just launch a 911 app that would connect to a server on the Internet (calling the Internet the “cloud” will get you smacked) and report my location? It could even display my native language (based on the locale of the phone) so the operator would have that information, and it could also stream video and audio in order to give the PSAP accurate information to judge the proper response. For example, it would be silly to send fire trucks and multiple cars to a fender bender on a side street, but that might be warranted for a crash on the interstate with possible injuries and the need for traffic management.

I am not vain enough to think I came up with this before anyone else, and a quick search shows that there are a number of companies working on this, but it doesn’t seem to have been adopted much. Redsky appears to have offered one as far back as 2010, but there wasn’t a video component, and another website I checked appears to have been hacked and defaced, and no one has noticed, so I don’t think this is a high priority for anyone at the moment.

This seems to be a great project for an Open Government initiative. Using open standards, we could probably easily build the app and then permissively license the server side libraries so that they could be embedded in current PSAP offerings.

Seems like a cheap win, but knowing how slowly the 911 infrastructure changes (e.g. think glacier) I don’t see it happening soon unless people start asking for it.

One thought on “In The "Why Didn’t I Think of this Before?" Dept.”