Soon after my review of the AKCP Sensorprobe, I was contacted by Jan Rehak of the HW Group in the Czech Republic. I was asked if I would review one of their SNMP-based sensor units. I replied “of course” as I thought it was cool that anyone would want to send me an evaluation unit of anything, and I wanted to embark on my new career as super-duper, top-notch web reviewer-guy (are you listening, Telsa Motors?).

A few days later I received an HWg-STE Ethernet SNMP Thermometer, which is their most popular unit. 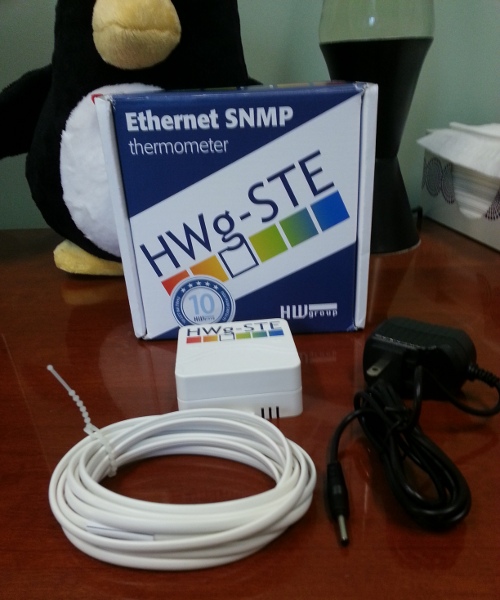 The HWg-STE supports two sensors, and it comes with one for temperature. The cable is pretty long so it can be placed some distance away from the unit. The unit is very compact, and molded into the case on the top and bottom are places for mounting screws. I installed it on the wall in the server room next to the Sensorprobe2.

One of the things I liked about the description was that it said it supported Linux for installation. Like most units of this type, the main configuration is done through a built-in web server, but a lot of vendors ship a small application to aid in the initial setup. The HWg-STE shipped with a CD that was Windows only (same as the Sensorprobe2) but I was able to find a Linux version on their website.

Unfortunately, I was unable to get it to work under Ubuntu 13.04, which is my current desktop at work. The application launched but failed to find any sensors. I did install the application via the CD on a Windows 8 machine we have in the office and it located the unit with an IP Address of 192.168.1.80. I changed it to match our LAN addressing scheme and then did everything else from my desk using a web browser.

Once on the network, setup was a breeze. The webUI is very clean and easy to navigate. I was able to label the sensor which was also reflected in the data I was able to receive via SNMP.

Both the HWg SNMP MIB and a short OID description document are accessible from the “System” menu of the interface. The HWg-STE does support the ability to send e-mails when a threshold is reached, but I was a little disappointed with the lack of SNMP trap support. Also, like many devices like this, it only supports SNMPv1 – an SNMPv2 GETBULK request will fail. Like the Sensorprobe2 there is no IPv6 support.

It was pretty easy to add the device to OpenNMS for datacollection (and the configuration will be included in version 1.12):

The values returned are close to the values reported by the Sensorprobe2:

I don’t have any way to determine if one is more accurate than the other, but they both seem to be close enough for the accuracy needed to monitor a server room temperature.

Overall, I really liked the size of the HWg-STE and the look of its interface, but the missing SNMP trap support is frustrating. I would also like to see more information in the MIB, such as high and low thresholds, so that those can also be graphed. Proper SNMPv2 support as well as IPv6 support would be nice, but as much as I like IPv6 I am not seeing it as a requirement in the marketplace at the moment.

UPDATE: Jan wrote me back with some clarifications.

Of course we have other devices with SNMP Traps & more detailed MIB. But you know, product segmentation..

Our main product is the Poseidon family
Many more sensors, I/O, etc..