Okay, so back in the summer I decided to attempt to wean myself from Apple and to migrate to a Linux desktop. This is a much overdue post on how that went and how it is going. The TL;DR version is that I used Ubuntu 11.04 (Naughty Nightnurse) and liked it okay, then was excited to upgrade to 11.10 (Onanistic Oedipus) only to be somewhat disappointed with many of the changes. So I tried out Kubuntu, got frustrated and ran screaming back to Apple. I upgraded to Lion, realized that Lion really, truly sucks – sucks enough to make me rethink my decision to switch back. Then I find out that Debian testing (wheezy) now supports Gnome 3, so I loaded it up and I am extremely happy with it (and I’ve downgraded all of my Lion partitions back to Snow Leopard).

Okay, first some background. I use three main systems: a Desktop at the office (a 24-inch iMac (iMac9,1 to be exact) and an identical iMac at home (I bought them both, cheap, from B&H in New York). When I travel I take a second generation Macbook Air (Macbook3,1). The key to being able to use three different machines is that most of what I do is centralized on servers that I maintain. I am e-mail centric, and IMAP makes it really easy to access the same information on all three machines.

In order to start this migration, I needed some more IMAP-like services for things such as Calendar and Contacts. I found a solution in the SOGo project, which I talked about earlier. I’m still a big fan of it after several months.

Now, when it comes to Linux Desktop operating systems, there are basically two main choices: Fedora and Ubuntu. Since I was “gettin’ my freetard on” I would have preferred Debian, but they tend to lag a bit when it comes to new and shiny. Since Red Hat is headquartered nearby and I know a lot of the Fedora folks, I started out there.

Now, back in 2001 when I first started playing with Linux desktops, I was much more of a fan of KDE than Gnome, so I loaded up the KDE spin of Fedora 15. Now the biggest hurdle with getting Linux installed on Mac hardware is that for the last few years the graphics card of choice has been NVIDIA, and until recently open source support on NVIDIA was lacking. I found out in short order that the kernel option “nomodeset” is your friend in such situations. With it, I was able to get Fedora to boot enough to add the RPMFusion repos so I could load in the proprietary drivers.

Things went well for a couple of days until Fedora released a kernel upgrade, which broke my drivers, and RPMFusion didn’t have updated packages available. This lasted several days and made me frustrated enough to try out Ubuntu.

So I loaded up Ubuntu 11.04 with its fancy Unity interface. Again, I had to use the “nomodeset” kernel option to get it to load initially, but Ubuntu makes it extremely easy to add proprietary drivers. Like it is advertised, Ubuntu really tries to take the Linux desktop to the masses.

I should note here that both Fedora and Ubuntu (or more specifically, KDE and Unity) are downright beautiful. Compared to the Linux desktops I remember, they are gorgeous, and I believe they give both OS X and Windows 7 a run for their money.

I liked Unity, but wasn’t in love with it. There are still a number of issues (sometimes I launch programs that don’t show up in the Launcher) and it is plain that they are trying to emulate to some extent the OS X dock.

After using Ubuntu for several weeks, I noticed that my now aging iMac was a little slow. So when woot.com offered up a nice HP desktop for $500, I decided to buy it. The main selling point was an ATI graphics card, so I figured that it would be easier to install and run as a Linux desktop, and I wasn’t wrong. What really struck me was how much power I got for $500. If you’ve been paying the Apple tax as long as I have, you don’t realize how expensive their gear really is. Now, don’t get me wrong, I love the design and weight of my Macbook Air, but for desktops I’m not so sure the value is there.

Anyway, it was easy to migrate to the new system, and I was relatively happy until Ubuntu 11.10 was released. If you’ll remember, this was about the same time as the iPhone 4S was announced, and I could have cared less about that. With Ubuntu I was very excited, since I had become something of an Ubuntu fanboy, but I found 11.10 to be a disappointment.

They made a number of changes that impacted me negatively. First, Thunderbird, which worked well against SOGo in 11.04, was upgraded to version 7 on Mozilla’s questionable rapid release cycle. Unfortunately, SOGo isn’t able to keep its connector updated with so many releases and I lost my Address Book integration (Thunderbird doesn’t support CardDav and doesn’t appear to have plans to do so in the future). I also get frustrated with Ubuntu’s decisions to switch default apps somewhat willy-nilly. First it is Rhythmbox, then Banshee, and now apparently in 12.04 it will be Rhythmbox again.

For mail I tried to switch to Evolution, but for some reason I wasn’t able to get it to talk to SOGo either (that was probably an error on my end instead of Ubuntu, however). I was also surprised that they eliminated the screensaver, but I found out later that it was more a change to gnome-screensaver versus a decision by Ubuntu. Still, if you want to own the desktop market, a little stability is in order (and may arrive with the longterm release 12.04, Porky Paedophile).

In a fit of pique I decided to base the box and run Kubuntu. I always liked KDE and I figured that perhaps with the backing of Ubuntu for things like proprietary drivers, that would work for me.

So I set up Kmail, and Kontact and all that other good stuff (KDE has a specific option to connect to SOGo). I was a little shocked by how ugly Kontact was – they add these huge 800×800 pixel QR codes while not inheriting the system font size so the information you actually need is often hard to read, but overall the desktop was decent. If you like customizing your options to death, then this is the desktop for you.

However, I was frustrated by a number of little things. KDE kept complaining that it couldn’t connect to SOGo with these little, growl-like pop-up messages and I could not for the life of me figure out how to turn them off nor could I discover a log file that might help me diagnose the problem. All these things started to add up, but the straw that broke the camel’s back was a two hour stretch where I could not get a WebEx session with a client to work. This was impacting my productivity too much and I was so frustrated that I went and grabbed my old iMac out of the training room and resumed being an OS X desktop user.

Since I had decided that my experiment was a failure, I figured that if I was going to suck at the Apple teat I might as well go all in. I downloaded Lion and upgraded my systems, and sat back, a bit resigned, but knowing that my productivity was once again safe.

That was until I discovered that OS X Lion sucks.

I’m serious – I’ve been extremely happy with every release from Jaguar on (I missed Puma), but this one is just horrible. In Apple’s attempt to reduce the amount of thinking the user had to do, they’ve gone a bit overboard. Mail.app – my main application – seemed buggy and almost kludgy (I hate the way it defaults to threaded, or “conversation” view”). Since Apple wants to know all about your communications, they don’t add a way to encrypt your e-mail with GPG, or even a decent API. The folks over at GPGTools have responded by stripping almost every useful option out of their Lion release, which meant that I was constantly being prompted for my GPG key. Apple seems to insist on restoring every single session, application and tab once you close (or shut down) and to relaunch them with no visible method for disabling that behavior. Gone is the “Save As” function, now replaced by “Save a version” or “Export” in many programs, and be careful if you touch a file that hasn’t been accessed in awhile – it will be “locked” until you click a button in a dialog box. Sheesh – and they had the gall to knock Windows for having too many security pop ups – I touch numerous older files every hour and this gets annoying, fast.

And let’s not start in on the Address Book or Calendar. What’s with the vomit yellow-tan faux leather? The old apps were clean and sparse – making it easy to find what you need. Who actually uses a wall calendar anymore, much less needs to reminisce about flipping a page over to access the next month? What’s next, a rotary dial on the iPhone?

What I was pleasantly surprised about was the most talked about change in Lion – the “natural scrolling” feature. It is more natural, and I grew to like it almost immediately. But hey, want it in Snow Leopard? Download “Scroll Reverser“. Want it on X? Simply add a file to your home directory and restart X:

So now I was in a funk. A certifiable bad mood™. The Linux desktop seemed to be a dead end, most of what I loved about OS X had been taken away from me, and I wasn’t about to try Windows 7 full time. I did spent a little time with Linux Mint 12, but I didn’t like it nearly as much as Unity, and I wasn’t in love with Unity.

But then my friend Gareth Greenaway mentioned on Google+ that Debian testing (wheezy) now supported Gnome 3. I had avoided Gnome 3 because of the large amount of negative comments, especially from people like Linus Torvalds. Linus is a smart man, much smarter than me, and if he felt the need to throw that much bile at something, it must be bad.

Now, I have a soft spot for Debian. It’s the distro that doesn’t get any respect, but it is doubtful projects like Ubuntu and Linux Mint would exist without it. I love the way it just works, even though it tends to be a little long in the tooth in some areas, even on release day. I’m an old guy – I don’t need the latest shiny – I just need something that is stable and works.

So I installed Debian (see my previous post) and you know what – I’m a little pissed at Linus. Gnome 3 is awesome. Yeah – it’s different – but I think it is a little ironic that detractors claim open source doesn’t innovate when Gnome 3 is about the most innovative thing I’ve seen in years. It gets me to where I need to be, and then it gets the hell out of the way. I even like Evolution – which for some reason under wheezy was a snap to integrate into SOGo. Epiphany I can take or leave (it doesn’t render Amazon.com properly, but then I always have the choice of Chromium or Iceweasel) but overall I think the desktop is pretty amazing. There are still a number of rough edges, but I finally have a desktop I’m comfortable with and I can run on all three of my main machines. 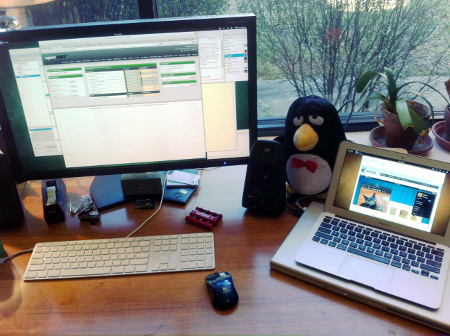